What’s behind the Chadian president's visit to Israel?

Prime Minister Benjamin Netanyahu’s office announced he will soon fly to Chad to re-establish diplomatic ties, but, before doing that, Netanyahu must consider which image of Israel he wants to advance in Africa. 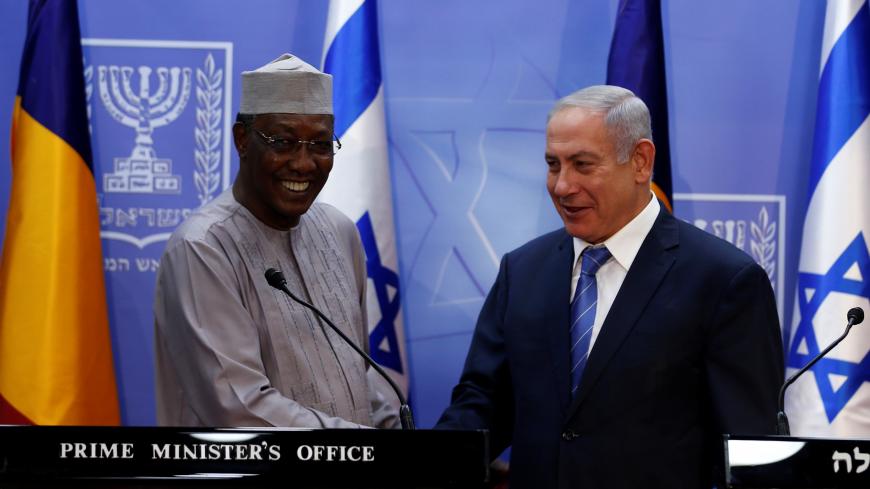 Prime Minister Benjamin Netanyahu was all smiles at his Nov. 25 joint press conference with Chadian President Idriss Deby. "Now I'm going to drop a big hint, I hope to come to the center of Africa. And I wish to bring with me Israeli entrepreneurs, Israeli experts, Israeli companies, everything that can improve the life of the peoples of Africa, which is something we believe in," said Netanyahu. But journalists noted a strange change of mood at the end of the press conference.

Deby and Netanyahu were about to leave the room when Deby was asked whether the two leaders discussed bilateral arms trade. The Chadian president started to make his way back to the microphones to respond, but Netanyahu reached the microphones quicker and stated, simply, "We discussed what we discussed."

This minor incident revealed the dilemma facing Israeli diplomacy concerning Netanyahu’s frenzy over Israel’s "return to Africa." What sort of image is Israel trying to project in its efforts to resume ties with Chad and other African nations? An image of Israel the smart-agriculture nation or that of Israel, world leader in sophisticated weapons?

On Nov. 22, just three days before Deby's visit, the Foreign Ministry hosted in Jerusalem a first-of-its-kind conference, "Africa, Climate Change and Israel’s Contribution." The keynote speakers were Patricia Espinosa, the executive secretary of the United Nations Framework Convention on Climate Change, and Rwanda’s Environment Minister Vincent Biruta. Netanyahu addressed the conference via video, and spoke of Israel’s achievements in solar, agriculture and irrigation technology. "Israel is in a unique position to work with African countries to alleviate some of these pressing environmental challenges," he said.

The participation of the Rwandese minister is interesting. Over the years, the foreign press has accused Israel of supplying weapons to the Hutu regime in Rwanda between 1990 and 1995. In 2016, the British press reported that documents detailing Israel’s alleged defense exports to Rwanda are to remain sealed, following a ruling by the Israeli Supreme Court. But over the past few years, Israel-Rwanda ties have grown very strong, turning Kigali into Jerusalem’s No. 1 ally on the continent. Senior Israeli diplomat Roni Adam was recently appointed as Israel’s first resident ambassador to Rwanda (until recently, it was the Israeli Embassy in Ethiopia accredited also to Rwanda). Israel partners with Rwanda on several civil high-tech projects, mostly in fields of solar energy and telecommunication.

In the case of Deby, Israeli and Chadian interests are not necessarily similar. The Chadian delegation to Israel included Foreign Minister Cherif Mahamat Zene and President Deby's defense and security adviser Djiddi Saleh Kedellaye. According to reports, a secret meeting in New York at the end of September, between Zene and Israel’s national security adviser Meir Ben Shabbat, entailed a visit by an Israeli delegation to N’Djamena, thus opening the way for Deby’s formal visit. The fact that Ben Shabbat, and not a senior Foreign Ministry official, was sent to the New York meeting speaks volumes, though Israel did not confirm the meeting.

Reporting on Deby’s visit, the Chadian press openly addressed reports on arms deals between the two countries during the decades since Chad severed its diplomatic ties with Israel in 1972. Chadian French-language Le Pays newspaper noted that while Deby did not reveal details of his meetings with Netanyahu, the visit was surely focused on security. The newspaper added that Israel supported the Chadian army in the domain of satellite eavesdropping on rebel groups operating in the north of the country, and that part of the armored equipment of the Chadian army was bought from Israel.

In an effort to refocus the visit on Israeli technologies and innovations, Deby was invited to visit the irrigation solutions company Netafim and the Soroka hospital neonatal unit. Israeli press only briefly discussed the human rights record of Deby’s regime.

The Israeli dilemma over the nature of its ties in Africa also has another angle — that of the regional battle against jihadi groups. On that aspect, Israel is not ambiguous, stating clearly that this common goal is a priority on the African continent. Such affirmations were included in Netanyahu’s Nov. 25 press conference and were repeatedly expressed during his three trips to Africa. "We have a shared struggle, as you said Mr. Prime Minister, against the sickening evil of this century, which is terrorism," said Deby at the press conference, echoing Netanyahu.

Netanyahu wants Israel to be considered as a significant partner in the African regional coalition against extremist Islamist terrorism. But the way to this alliance is complicated. A senior Israeli diplomat reminded Al-Monitor that Israel has never participated in UN peacekeeping forces. Also, he noted, it is not involved in African and European efforts (mostly France, Germany and Italy) of establishing the G5 Sahel Joint Force designed to settle armed conflicts in the region and battle the rise of jihadi terror. The diplomat noted that the current trend is one of cooperation frameworks, which are not necessarily bilateral, for training of African armies and establishing governing institutions. And so Israel is supposedly left with assistance in intelligence and the supply of arms. Both means that could be used efficiently against Muslim terrorists, but also against anyone else who displeases certain regimes.

With growing rumors in Israel about attempts to get closer to Sudan, this consideration is especially relevant.