The killing of Chad's leader has ignited fears over the potential spread of violent mercenaries outside of Libya. 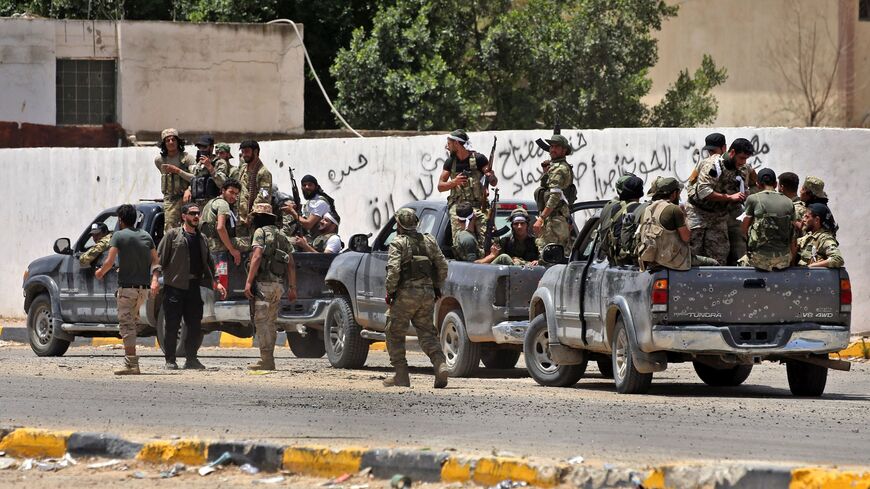 Fighters loyal to the UN-recognized Libyan Government of National Accord ride in technicals (pickup truck mounted with turret) along a road in the Qasr bin Ghashir district south of the Libyan capital Tripoli on June 4, 2020, after the area was taken over by pro-government forces following clashes with rival forces loyal to strongman Khalifa Hifter. - MAHMUD TURKIA/AFP via Getty Images

Member states of the United Nations Security Council on Thursday met to discuss concerns over the potential spread of thousands of foreign fighters in Libya’s civil war.

The meeting was called by representatives from Kenya, Tunisia and Niger in response to the killing of Chad’s president by rebels based across that country’s northern border in Libya. Details of the closed session were reported by AFP.

Libya’s conflict is approaching potential resolution as the Security Council has moved to enshrine a nationwide cease-fire and backed preliminary plans for steps toward national reconciliation after 10 years of civil war.

But there is no sign that foreign forces are leaving Libya in significant numbers despite a January deadline included in last year’s cease-fire agreement. More than 10,000 foreign soldiers and mercenaries are present in the conflict, which heated up again in 2019 as eastern Libya’s rogue general Khalifa Hifter launched a Russia-backed offensive against Libya’s UN-backed western government based in Tripoli.

The offensive failed, but led to an influx of foreign mercenaries into the conflict as Tripoli, backed by Turkey, sought to overpower Hifter’s advance. Both Russia and Turkey have brought thousands of Syrian fighters into Libya to fight on opposing sides. Syria itself is in a state of stagnated civil war with various sides backed by foreign states.

A security company based in the United Arab Emirates has also been accused of bringing thousands of Sudanese and potentially other sub-Saharan African personnel into the conflict, reportedly against their will in at least some cases.

Deby’s son has assumed de facto control, though fighting with rebels had continued. The rebels claimed to have downed a military helicopter, though the military said it crashed due to a technical fault.

The rebels have ties with Hifter’s forces and used the conflict to amass combat training, arms and money for their insurgency against Chad’s government. They have also been reportedly based at locations alongside Russia’s Wagner mercenaries in the conflict.

UN officials are now looking to organize a withdrawal of foreign fighters out of Libya. Thursday’s meeting focused on concerns about the potential of those fighters to spread violence in their home countries and across the globe.

"Without good control, without effective support, what happened in Chad could repeat itself again in this country or it could extend from the Sahel to the Horn of Africa, to Sudan, to South Sudan, to Niger, Ethiopia, the Central African Republic, to Mozambique," the AFP quoted a diplomat as saying Thursday.

Two diplomatic sources cited by the AFP said the Security Council established a link between the withdrawal of foreign forces from Libya to what happened in Chad.

US officials also have reportedly alleged that the Chadian rebels have ties to Russia’s Wagner group; this is denied by Russian officials. The US Defense Intelligence Agency reported earlier this year that it believes the United Arab Emirates may be partially funding Wagner’s operations in Libya.

Chad’s military government remains a recipient of French patronage and has ties with the United States.

Africa’s western Sahel region faces a brutal insurgency by Islamist jihadis, including Islamic State-linked fighters. The United States supports France’s operations in the region but considers the insurgency of low strategic priority at the moment, focusing instead on developments in East Africa.