A significant cornerstone on the way to overt normalization between Israel and the pragmatic Sunni states was laid this week in Bahrain at the US-led economic workshop. 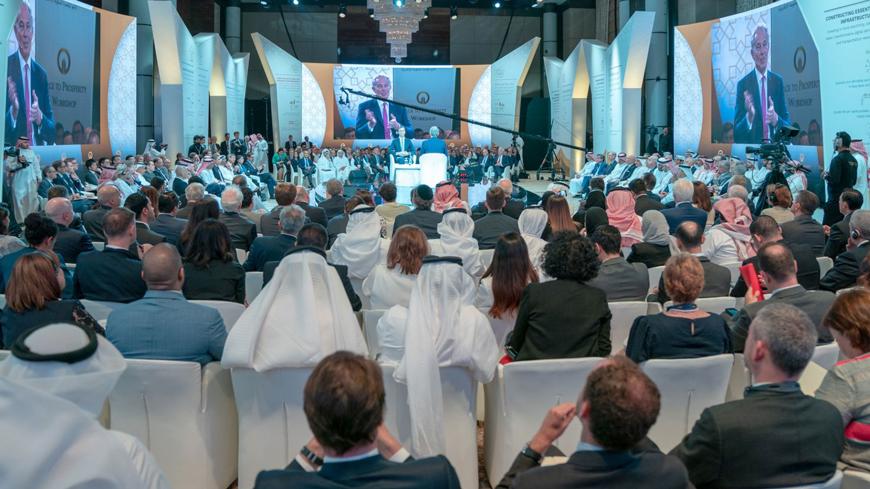 Egyptian President Anwar Sadat landed at Ben Gurion Airport in 1977, becoming the first Arab leader — and a bitter enemy at that, who started a bloody war in 1973 — to visit Israel. Sadat then signed a peace agreement with Israel in 1979, though the Palestinian issue remained outside the agreement, aside from the suggestion of autonomy.

The economic workshop in Bahrain June 25 is a message to the Palestinians that the Sunni Gulf states, too, could reach some kind of peace agreement with Israel, even before the Israeli-Palestinian conflict ends. It’s no secret that these states' relationship with Israel has grown closer in recent years in the context of the joint fight against their common Iranian enemy and the terrorism it promotes. Actually, this week in Bahrain, one of the open secrets in the Middle East came to light: the relationship between the state of Israel and some of the Gulf states, including Saudi Arabia, Oman and Bahrain. The Palestinians are again out of the picture and this is even more evident because of their boycott of the summit.

The fact that senior officials of Arab countries are talking naturally with Israeli businessmen, including retired Gen. Yoav Mordechai, and Israeli journalists in the hallways of the workshop in Manama smashes the myth of the boycott of Israelis. To Israelis’ eyes, the performance of normalization is much more important than the official goal of the conference, the regional “Marshall Plan” for the Palestinians to establish their state. Haaretz journalist Noa Landau, who was in Manama, even reported on harsh criticism of the Palestinian Authority’s conduct in boycotting the summit.

According to the reports of Israeli journalists, the Bahrainis went to great lengths to make their rare Israeli guests feel comfortable. They even encouraged the tiny Jewish community to reveal itself to the Israeli media. Thus, the community’s small synagogue in the alleyway of a local market was opened especially for journalists from Israel, where they also met Jason Greenblatt, the American envoy and one of the workshop’s godfathers.

The biggest wow factor was delivered by Bahrain’s foreign minister, Sheikh Khalid bin Ahmed Al Khalifa, in a series of interviews to Israeli television channels and media outlets, whose representatives arrived in Bahrain. The importance of these interviews was in their very occurrence, their breaking a taboo, but also in what was said. While Khalifa made the traditional statements on the necessity of establishing a Palestinian state, he spoke at the same time about the need for direct dialogue with Israel. His sharp criticism of the Palestinians was another conspicuous precedent, when he said that the Palestinian leadership shouldn’t have boycotted the workshop and that it’s a mistake to try to exclude the United States from the peace process. Another important statement was in support of Israel’s action against Iran in Syria. “Every country has a right to defend itself,” he said, in reference to Israel.

An Israeli minister involved in the issue told Al-Monitor on condition of anonymity that Jerusalem was surprised by the warm reception in Bahrain and especially at the sharp statements toward the Palestinians. “We hear these statements frequently in closed conversations, but this is the first time they were publicly stated in front of the cameras,” he said.

The minister estimated that the workshop will remove many roadblocks for commercial ties between Israel and the Gulf states. These relations partly have to do with elite technology products tied to cyberwarfare and surveillance, thus, for example, it was previously reported that Saudi Arabia used an Israeli company's programs to track journalist Jamal Khashoggi, who was assassinated at the Saudi Consulate in Istanbul. Other areas of commerce between the states are desalination and other smart water usage methods (drip irrigation), solar energy and an array of agricultural innovations suited to arid countries.

Res. Gen. Eitan Dangot, formerly the coordinator of government activity in the territories, told Al-Monitor that the Palestinians don’t interest the Gulf states as much, but the need to strengthen the alliance against Iran is a top goal that ties them to Israel, the United States and President Donald Trump’s deal of the century. This is the reason for their close involvement in the Manama summit and their agreement to let their relations with Israel go public.

The main casualty of all this is the Palestinian leadership, which has received a very clear signal from Arab states that it is like a bone stuck in the throat of the influential states in the region, and that in its conduct it prevents advancement in security, technology and economic cooperation. The Americans, for their part, sound more and more like they’re hinting that the current Palestinian leadership must be changed. These statements greatly concern Ramallah (the headquarters of the Palestinian Authority) and Gaza, and for now they cause the rift within the Arab world to widen.

The Palestinians have noted the situation, and while associates of Palestinian President Mahmoud Abbas organized demonstrations in some West Bank cities against the Bahrain summit, and the Palestinian media have attacked the meeting and the Arab nations that participated in it, behind the scenes a real debate went on among Palestinians. Shlomi Eldar wrote here in Al-Monitor that Mohammed Dahlan, an opponent of Abbas who resides in Dubai, is one of the prominent Palestinian critics of the boycott of the Bahrain summit.

One of Dahlan’s associates told Eldar that Abbas' "'no' policy will bring us down." He continued, “We don’t agree with the alleged peace suggested by the unstable American president, either, but turning your back on the Gulf states that are willing to invest billions in easing the Palestinian crisis is an act of stupidity that could turn out to be a historic mistake. Abbas only cares about himself and his seat, not about the future.”

A significant cornerstone on the path to overt normalization between Israel and the pragmatic Sunni states has been laid in Manama this week, but the lack of an agreement with the Palestinians delays the further development of these ties. However, it’s not certain that an ongoing delay in the peace process with the Palestinians would stop this normalization. In Bahrain, these nations made clear to the Palestinians that they support a diplomatic solution but that the Palestinians should hurry up, since they have other important interests and they won’t wait for them for long.

For Benjamin Netanyahu’s Israel, this is the optimal situation. The Palestinians are presented as refusers and are left outside the game, while Israel strengthens commercial and other ties with the Gulf states for the sake of the common interest to oppose Iran. The publication of the diplomatic component of Trump’s plan will be the true test for all sides. Israel, too, will then have to show flexibility so it doesn't waste the gains it reaped in Bahrain.