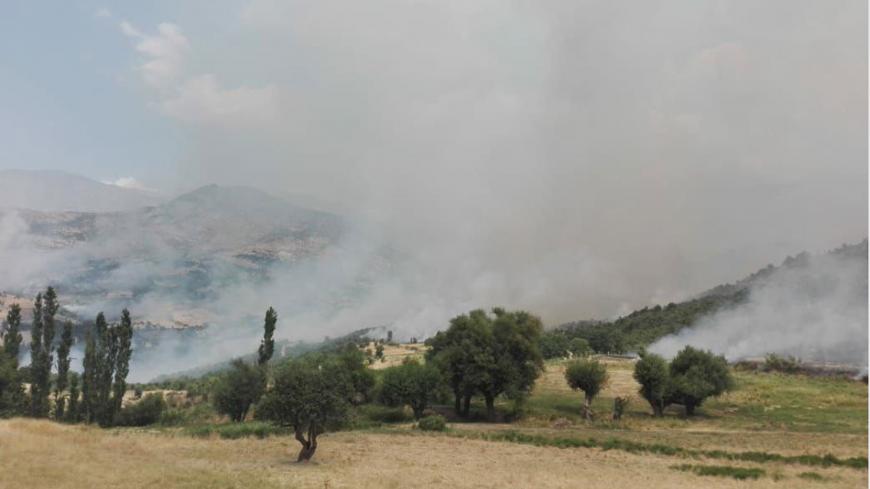 A picture showing what is said to be Iranian shelling of Iraqi Kurdistan, seen in an image uploaded July 11, 2019.

SULAIMANIYAH, Iraq — On the heels of the recent Turkish bombardment of villages on the border areas of Iraq's Kurdistan Region, Iranian artillery on July 10-11 shelled the Sidakan border area in Erbil province, killing a civilian and wounding two.

The Sidakan — or Bradost — area, 70 kilometers (43 miles) northeast of the capital city of Erbil, is a mountainous triangle area extending from the Kurdistan Region of Iraq to neighboring Iran and Turkey. Turkey and Iran frequently bombard the area, claiming they are targeting fighters of the Kurdistan Workers Party (PKK) and armed Kurdish parties that oppose Tehran, but bombardments and military operations often lead to civilian casualties.

"On [July 10] at 12:10 p.m. local time, on grounds of targeting the Iranian opposition groups in the region, Iranian artillery shelled areas of Barbazin and Dere, and the villages of Dustanan, Zhuzhila and Talan. Unfortunately, a Kurdish girl named Zaitun Qadir, 18 years old, was martyred, and two of her brothers — Ali, 14 years, and Sirwan, aged 23, were severely injured," Ihsan Chalabi, mayor of Sidakan town, told Al-Monitor.

"The civilians were engaged with agricultural work in Dere village when the Islamic Republic of Iran's artillery hit them. Consequently, all orchards and wild pastures burned and local citizens evacuated the area. We call on both Iran to halt shelling and the Iranian parties to not launch attacks on Iran from our area, for the sake of protecting civilian lives and their properties."

Chalabi said Iran haphazardly shelled the area, hitting regions that had not been the origin of attacks by the Iranian groups, emphasizing that "the shelling is for causing instability in the area. There are no clear headquarters and bases of Iranian opposition parties in those areas."

Since last June, airstrikes by Turkish fighter jets have killed four Kurdish civilians and injured several others in Kurtak, at the foot of the Qandil Mountains, and the Bradost area. Ankara’s excuse is targeting the Kurdistan Workers Party (PKK) guerrillas in the area.

The Kurdistan Regional Government (KRG) on Wednesday in a statement condemned the bombardment and said it “will not allow its border to be used for attacking and disrupting the security of neighbor countries.” Meanwhile, the KRG called on Iran to “end its bombardments of the region and not cause fear and displacement of residents.”

The bombardment of the Kurdistan Region’s border areas came one day after three Iranian soldiers were killed in the western city of Piranshahr.

He said Iran bombs civilian-populated areas every summer to create “problems” for the people of Kurdistan Region. Bahrami also said the PDKI is not responsible for the killing of the three members of Iran’s Islamic Revolutionary Guard Corps, and that Kurdish people of Iran have made the attack on retaliation to the killing of civilians and Kurdish kolbars by the Iranian forces.

Kolbars are smugglers from Iranian Kurdistan who cross into Iraqi Kurdistan borders illegally and bring heavy cargo on their backs back to Iran to earn their daily bread in harsh environmental conditions. Iran says kolbars are weakening its economy — hard hit due to US sanctions, thus meeting them with bullets.

According to human rights watchdogs, at least 48 smugglers were killed by Iranian border guards and other 104 were injured.

Al-Monitor on July 12 called on Ahmed Al-Sahaf, spokesman of the Iraqi Ministry of Foreign Affairs, for comment on the shelling, but he was not ready to offer a detailed response. He said “Until now we are busy with arranging our stance. We will send it in due time.” At the time this report was published, the ministry had yet to publish any formal statement.

Turkey said Diyar Gharib Muhammed, a senior member of the executive council of the PKK, was killed July 7 in the Qandil Mountains during a joint operation between the Turkish Armed Forces and the National Intelligence Organization. The PKK confirmed on the same day the killing of its senior leader — originally from Kurdistan Region — by a Turkish airstrike and threatened to retaliate. It indirectly accused the KRG and the Kurdistan Democratic Party (KDP) of spying for Turkey, collaborating on the killing of Gharib, furthering instability in the area and raising worries among locals of direct armed clashes between KRG peshmerga forces and PKK fighters. The Kurdistan Region Security Council later denied the accusations.

Muhammed Amin Penjweni, a veteran Kurdish politician, told Al-Monitor both Iran and Turkey — as “two invader states of Kurdistan” — are bombing civilians on claims that Kurdish opposition parties target them from Kurdistan territories to create instability in the area. “The PKK has not formally accused the KDP of collaboration with Turkey. I do not think the assassination, which was carried out via MIT agents in the area, would lead to civil war between the KRG and the PKK.”

Civilian casualties spike on a daily basis due to both Iranian and Turkish bombardments, airstrikes and incursions, and neither the KRG nor the Iraqi federal government can save their own citizens’ lives.