US Senator Rand Paul reportedly spoke with Iran's foreign minister this week with the president's permission, and some experts believe the quiet meeting could be the beginnings of an effort to negotiate. 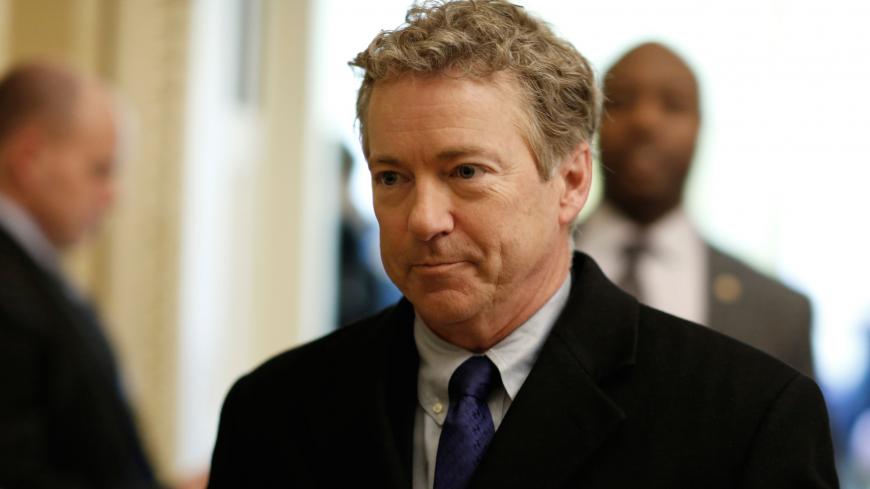 WASHINGTON — Iranian Foreign Minister Mohammad Javad Zarif met with Sen. Rand Paul (R-Kentucky) in New York July 18 to feel out prospects for possible discussions between Iran and the United States, a non-government expert in contact with the Iranian team told Al-Monitor on condition of anonymity.

The Iranian mission to the UN did not respond to Al-Monitor queries on the meeting. Zarif told reporters in New York Thursday that he was holding meetings while in New York this week with some members of Congress, but not with US administration officials or envoys. He would leave it to the US lawmakers he met with to identify themselves if they wish, he told UN reporter Susan Modaress.

The US administration was aware of a possible meeting between a US Senator and Zarif in New York, a US official said Wednesday. Paul was not acting as an official US envoy, Al-Monitor understood.

“We're aware of reports of a supposed meeting between a US Senator and Zarif,” the US official, speaking not for attribution, told Al-Monitor on Wednesday. “It's unclear how productive a conversation with Zarif would be, given his limited role in making decisions on behalf of the Iranian regime. The president has said several times that he is willing to talk with Iran. However, the regime has shown no signs they're ready to meet diplomacy with diplomacy.”

Paul, speaking to Fox News Thursday, said he supported diplomacy and thought there was a possible opening for an agreement under which Iran would agree to never develop nuclear weapons.

“I think there is a possible opening that Iran would sign an agreement saying that they won’t develop a nuclear weapon, ever,” Paul told Fox News’ Neil Cavuto on Thursday. “That would be a huge breakthrough.”

“I think President Trump is one of the few people who actually could get that deal,” Paul said. “And he will get it because he’s strong, and he is showing maximum pressure, but he is also willing to talk.”

Paul said he thought it would be useful to open discussions with Iran about what kind of changes in behavior the United States would like to see for the removal of sanctions.

“I think diplomacy is a good idea, and I think that if sanctions are to work, you also have to talk about removing them,” Paul said. “So I think the discussion now, since we have maximum pressure on and maximum sanctions on Iran, now we have to say what would we be willing to remove them for.”

Zarif, speaking to reporters in New York Thursday, proposed that Iran could move up ratification of the Additional Protocol, ensuring lifelong extensive International Atomic Energy Agency inspections and verification to ensure Iran’s nuclear program is strictly for civilian purposes, in exchange for the United States moving up its lifting of sanctions.

Former chief US negotiator on the Iran deal Wendy Sherman said Friday that she considers Zarif’s proposal the beginnings of an effort to negotiate, and she hoped and expected that Zarif and Paul did meet.

“My fundamental question to the administration is: What is the strategy?” Sherman told an audience at the Aspen Strategy Forum in Colorado on Friday. “I know it’s about maximum pressure. But to what end?”

“It’s not going to fly, but it shows they are willing to find some sort of accommodation,” Ali Vaez, director of Iran programs at the International Crisis Group, told Al-Monitor, referring to the new Iranian proposal.

Politico first reported on Wednesday that Paul had asked Trump, and received his permission, to let him try to begin discussions with the Iranians. Paul’s office did not respond to a query from Al-Monitor on Friday.

“I think Rand Paul has one major advantage and one major disadvantage,” Vaez said. “The advantage is his direct link to the president, so he can go around [national security adviser John] Bolton and [Secretary of State Mike] Pompeo. The disadvantage is that he does not know the Iranians, and he is not familiar with the culture of nuances.”

“Without putting a concrete offer on the table, I don’t think this will go very far,” Vaez added. “We have to wait and see if there is anything concrete there.”

Trump, speaking to reporters Friday, said he was not concerned about tensions between the United States and Iran further escalating after the United States said it downed an Iranian drone in the Strait of Hormuz. Iran denied that it had lost any drone.