Inside the US-Iran prisoner swap, and what comes next

Can Washington and Tehran build on the success of the Swiss facilitated exchange? 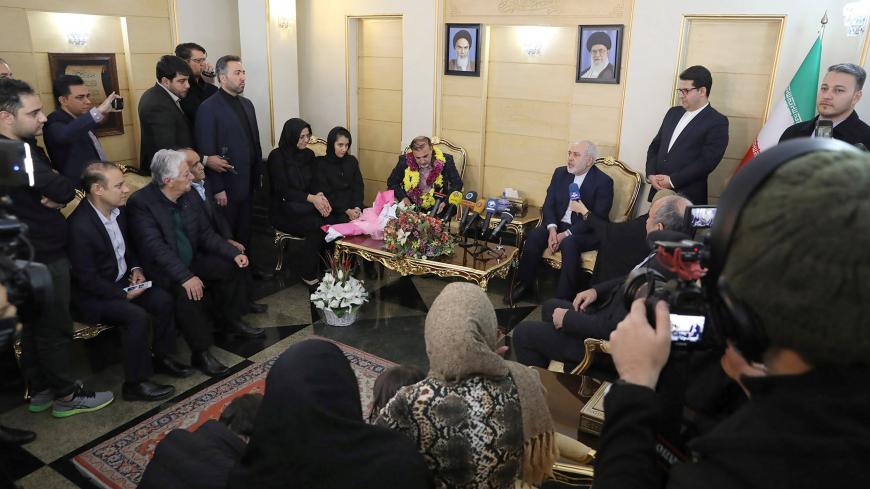 Days before an Iranian stem cell scientist was due to plead guilty and be sentenced to time served by an Atlanta judge as part of a carefully negotiated prisoner swap that would lead to the release by Iran of Princeton graduate student Xiyue Wang, a potential spoiler emerged.

State Department Iran envoy Brian Hook sent a message to the Swiss and Iranians that former New Mexico governor and US Ambassador to the United Nations Bill Richardson was not authorized to negotiate the swap by the US government, according to a person involved in the negotiations. Instead, the Justice Department directed the US attorney in Atlanta to drop all charges against the stem cell scientist, Masoud Soleimani.

“We had a plea agreement that had been agreed to by the US attorney in Atlanta and defense counsel, and was awaiting the judge’s acceptance on Dec. 11,” former Kansas Democratic Rep. James Slattery, who worked pro bono to try to help attorney Jason Poblete secure Wang’s release, told Al-Monitor. “The court date was set for Dec. 11 for the judge to review the plea agreement. It was certain to be approved by a federal judge. After that, Dr. Soleimani would have been sentenced to time served and released.”

“And then the Justice Department intervenes with the US attorney, and basically directs the US attorney to drop all charges,” Slattery continued. “That’s how that all happened.”

The swap proceeded in Zurich on Dec. 8, with the charges dropped against Soleimani rather than a plea deal. Hook had flown on a plane with Soleimani, who was in the custody of US marshals until he was turned over to Iranian officials. Wang was flown to Zurich from Tehran on a flight with Iranian Foreign Minister Mohammad Javad Zarif and a senior foreign ministry adviser on Latin American affairs, Mohsen Baharvand.

Hook subsequently said that he and Baharvand did not converse at the swap, calling it a missed opportunity, and suggesting that Baharvand may not have been authorized to speak with a US official.

“We demonstrated with the prisoner exchange that we know how to work together and reach a deal,” Hook told an audience at the Council on Foreign Relations on Dec. 12. “I do hope this exchange is a first step.”

Hook did not immediately respond to a query from Al-Monitor on why he had allegedly intervened in the potential swap preparations in the final days, before subsequently jumping in and claiming credit.

Mickey Bergman, the vice president of the Richardson Center for Global Engagement — which had been approached by the Wang family as well as others held in Iran, Syria, Venezuela, North Korea and Russia to try to secure their release, and had been engaged with both Zarif and officials at the National Security Council and Justice Department for months — said the important thing is that Wang was home.

"The Wang-Soleimani exchange proved to the Iranians that we can deliver, not only talk; and it proved to us, including the US government, that the Iranians are good on their promise to Richardson,” Bergman told Al-Monitor. “This is very important as there are more Americans in Iran that we want to bring home."

"We work on behalf of the families,” Bergman said. While governments have a “complex set of interests with any foreign government, we have a singular one: Bring the person home. While we understand the 'bigger picture,' that means that we often need to 'cook' an arrangement on our own, and introduce it to the government only when we feel it is set, otherwise we allow spoilers … who don't want a deal, to spoil."

“I wish they understood this is not a one-time game,” Bergman said of government officials jumping in at the last minute to try to seize control of or credit for a sensitive exchange, noting there are other prisoners whose release they are working to secure.

Bergman said he and Richardson were encouraged by a meeting they held with Zarif on the sidelines of the Doha Forum on Dec. 15 on the prospect of securing the homecoming of others held by Iran, including Navy veteran Michael White. They are also working on the case of former FBI agent Bob Levinson, who went missing on Iran’s Kish Island in 2007.

"Following the Wang-Soleimani exchange, … Gov. Richardson sat with Foreign Minster Zarif in Doha, closing the loop on the latest exchange and discussing further humanitarian exchanges,” Bergman said. "We are working on behalf of and at the request of Michael White's family as well as Bob Levinson's family. Naturally, those two cases were discussed in our meeting with FM Zarif. The discussion was productive. There is a lot of heavy lifting to do, but we are hopeful."

Though Hook, Ivanka Trump and Treasury Secretary Steven Mnuchin also attended the Doha Forum, Zarif said there had been no Iranian official encounters with members of the US government delegation there. “No meeting or even accidental encounter in Doha,” he told Al-Monitor.

If the Trump administration wants to get to talks with Iran, it should adjust its approach, Bergman said.

“If the US wanted to facilitate meaningful dialogue with Iran, either in Zurich during the exchange or in Doha after the exchange,” he suggested holding off on announcing new sanctions. “Instead, make a positive statement, like the president actually did, but back it up in actions, don't follow it up with slapping additional sanctions. That proved to the Iranians that they couldn’t trust the president."

Slattery, who was acquainted with Iran’s ambassador to the United Nations, Majid Takht-Ravanchi, who did his university and graduate studies in Kansas, said he hoped the United States and Iran could build on the success of Wang’s release.

“I learned a lot during these negotiations working with Jason Poblete and Gov. Bill Richardson and the Iranian officials,” the former Kansas congressman told Al-Monitor by email. “The Iranian officials did exactly what they promised me they would do.”

But Slattery said he had concerns about prisoner swaps, and respected the Justice Department’s concerns about politicizing, or the appearance of politicizing, the US legal system. He also urged the US government to ease sanctions that restrict Iran’s ability to procure medicines, because banks do not have the assurances they need to facilitate the transaction.

“I do not like prisoner swaps because they can politicize our legal system,” he said. “We must never charge someone with a crime for political reasons nor should we release someone from prison who has been charged with violating US law for political reasons. Criminal cases should be processed based on the law and facts.”

“I urge the administration to be as bold with its diplomatic outreach to Iran as it has been to North Korea,” Slattery concluded. “The rewards will be far greater.”

“I believe it's in the interest of all to engage in a comprehensive exchange of detainees on both sides,” an Iranian diplomat, speaking not for attribution, said Wednesday.

Nizar Zakka, a Lebanese US green card holder released by Iran in June, said that he and Wang’s wife, Hua Qu, had met with US national security adviser Robert O’Brien in September and sought to persuade him that the United States should respond to Zarif’s overtures that he had authority to negotiate a prisoner swap.

“We were very clear, why do you not respond to Zarif,” Zakka told Al-Monitor. He said they tried to impress on O’Brien, who previously served as Trump’s special hostage envoy, that “it was the first time that Zarif was mentioning names” of Iranians held by the United States that could be potentially released in a swap,

Zakka, who said he was in the same cell with Wang in Iran for two years, expressed joy that he was back. “We stayed next to each other for two years,” Zakka said. “He is a great guy. … I am so glad that he is back.”