A mutual release of prisoners would be a low-cost way of reducing US-Iran tensions and providing the countries' leaders small breakthroughs. 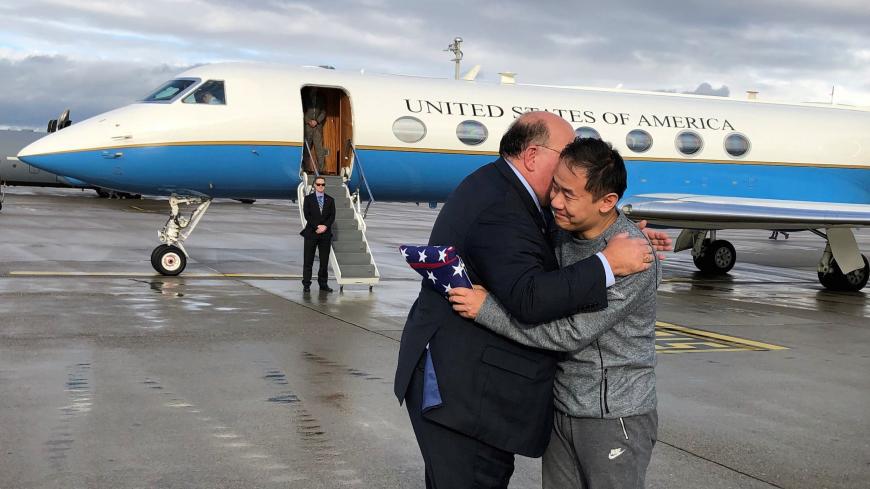 When antagonist countries are at odds on everything else, swapping prisoners can be a low-cost way of easing tension while scoring small successes for the respective leaders. Iran and the United States managed one such win-win prisoner swap in early December. Arrangements are largely worked out for another, but will require both sides to take yes for an answer.

On Dec. 7, Princeton doctoral student Xiyue Wang was released from his 3-year-long imprisonment in Iran in exchange for the US release of Iranian stem-cell scientist Masoud Soleimani. The latter had been arrested for a failing to obtain the required licenses to export human growth products for medical research, a minor violation of sanctions regulations.

Three elements made the December swap possible. Firstly, both sides had to be convinced that it was in their interest. For the United States, this should be a no-brainer. President Donald Trump has placed a high priority on winning the freedom of Americans imprisoned abroad, and he is quick to boast of those who have come back on his watch, especially if can contrast it, however incorrectly, with the record of his predecessor, Barack Obama. In this case, the Trump administration was able to boast that no cash was involved in the exchange.

Trump and his allies contrasted the moneyless Wang-Soleimani swap with the $1.5 billion in cash transferred to Iran in January 2016 coinciding with the implementation of the Iran nuclear deal and the release of Washington Post reporter Jason Rezaian and four other dual US-Iranian nationals in January 2016. Those five were released in exchange for the US dropping charges against seven Iranians, mostly dual nationals, arrested for sanctions violations. The cash transfer was the settlement of a three-decade-long financial dispute in which Iran received its own money back plus a small fraction of the accrued interest.

For Iran, the December swap was a face-saving way to remove a public relations embarrassment. In the eyes of most foreign observers, Wang had done nothing to warrant Iran’s charge of espionage. He had simply been doing archival research on the administrative and cultural history of the Qajar dynasty, which ruled Persia a century ago.  Iran may also have wanted to deflect global attention from its deadly crackdown on widespread domestic protests.

A second necessary ingredient for the successful swap was that it involved like for like. Iran typically insists on symmetry in diplomatic dealings, so to release scholar Wang, they needed to obtain in return an imprisoned Iranian scholar. Soleimani was not important in his own right, and would have been released soon anyway in a plea bargain, since the charges against him were not watertight. But he fit the bill. So once the Iranian government determined that a swap would be beneficial, it inflated the importance of winning the release of Soleimani (no relation to the late Islamic Revolutionary Guard Corps Quds Force commander Qasem Soleimani).

A third key to the December swap was the sharing of credit. Common wisdom has it that the swap was worked out between US and Iranian diplomats through the good offices of Switzerland, which represents both countries interests in the absence of their mutual recognition. The story is true to an extent. But as explained in an Al-Monitor story from Dec. 19, the heavy lifting in persuading Iran and the US Department of Justice to take the necessary steps was done by the nonprofit Richardson Center for Global Engagement in New Mexico, run by former Ambassador to the UN Bill Richardson, and former Kansas Democratic Rep. James Slattery.

The US State Department had opposed a prisoner swap, on grounds that it would be seen as a relaxation of the campaign of maximum pressure on Iran. Once the Department of Justice agreed to release Soleimani, however, and the State Department realized that Wang also would be released, the US special representative for Iran, Brian Hook, stepped in. He revised the final arrangements and flew to Geneva to and take the handover of Wang. The Richardson Center said it did not care who got credit, the important thing was the prisoner release.

Immediately after the December swap, Foreign Minister Mohammad Javad Zarif tweeted that Iran was ready for a further “comprehensive prisoner exchange” with the United States. An aide of his said the government sought the release of “around 20” Iranians in US custody. He did not name them, but VOA Persian compiled a list of 13 Iranians who are in US prisons or on conditional release.

Four American citizens were known to be jailed in Iran on charges that seemed spurious: Navy veteran Michael White, detained since last summer after visiting his girlfriend in Iran; Siamak Namazi, a business consultant, and his 83-year-old father, Baquer Namazi, a former UNICEF diplomat, detained in 2015 and 2016 respectively; and environmentalist Morad Tahbaz, arrested in January 2018. The case of a fifth American often thought to be imprisoned in Iran, former FBI and CIA contractor Robert Levinson, was less clear. In March, US intelligence agencies concluded that he most likely died in Iranian custody “some time ago.”

The least complicated exchange would be one involving White, both because of his medical complications and because he holds no other passport. The Namazis and Tahbaz are dual Iran-US nationals. On the symmetry principle, releasing them would require the US release of dual nationals, who, like some others who have been granted clemency, may well not want to be expatriated to Iran. Their staying in the US would significantly dilute the political benefit for Iran.

The Jan. 3 assassination of Soleimani and Iran’s vow to extract revenge put a damper on discussions to release White. The Richardson Center continued its efforts, however, and, according to knowledgeable parties, arrangements are nearly in place. When White exhibited coronavirus symptoms in March, Iranian authorities furloughed him from prison. If he is in danger of dying from COVID-19, it would be to their advantage for him to leave Iran altogether. But they would like to get one of their own citizens released in exchange.

The citizen Iran wants released is Sirous Asgari, a materials science and engineering professor.  Asgari was originally arrested over an alleged sanctions violation, for which he was acquitted in November. Today he is in an isolation cell in an Immigration and Customs Enforcement (ICE) jail in Louisiana. ICE has refused to release him for reasons that make no sense: because he no longer has a valid visa. It is not a stretch to think he is being held as trade bait.

Having now contracted COVID-19, Asgari should be released quickly on humanitarian grounds. Iran should then allow White to return home.

Why the exchange has not happened yet is unclear. Involved sources say there are unresolved issues, but will not say what those issues are. An Iranian official said the ball is in the US court. Mickey Bergman, vice president of the Richardson Center, suggested that the Trump administration is again torn between wanting Americans released and not wanting to be seen as letting up on its maximum pressure campaign or setting a precedent that might create incentives for Iran to take more prisoners.

Other sources say Iran has its own reasons for ambivalence. Ali Vaez of the International Crisis Group said, “The insensitivity of the US during the COVID crisis has further poisoned the well in Iran. There is currently no appetite to enter into any kind of dealing with the Trump administration.”

Other politically involved Iranians said that despite the disinclination to deal with the Trump team, “a prisoner swap is a different story.” There are signs of ambivalence, however. On April 28, Voice of America reported a lack of public or private support by Iran for the Iranian citizens under prosecution or convicted of crimes in the United States.

Zarif did show interest in Asgari, however, tweeting March 27 a news article about the scientist, claiming the United States had taken “several Iranian scientists hostage without charge or on spurious sanctions charges” and calling for their release. Meanwhile, a State Department official said US authorities are "working with the Swiss on a daily basis to ensure the health, safety, and release of US citizens currently imprisoned in Iran."

At a time when prisons in both countries are incubators for the coronavirus, there is a strong humanitarian case for furloughing those who pose no danger to society such as White, Asgari and the Namazis and granting them freedom to repatriate. Trump and Zarif could both claim a small victory. Given the heightened animosity between Iran and the United States, the prospect for military escalation in the Gulf and the absence of any diplomatic channels, small breakthroughs are probably the most that can be achieved for the time being.