Trump says Iran prisoner swap shows deal can be made

A successful US-Iran prisoner swap is a confidence building measure but it remains to be seen whether it could be a prelude to negotiations on broader US-Iran tensions. 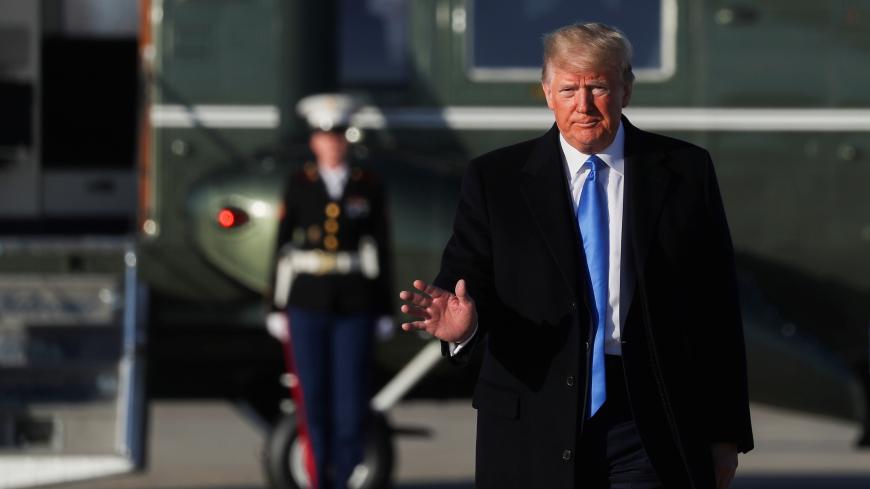 US President Donald Trump waves as he walks from the Marine One helicopter to board Air Force One and depart Washington for a day and evening trip to Florida from Joint Base Andrews, Maryland, Dec. 7, 2019. He was hopeful that day that an exchange of prisoners with Iran could lead to a larger deal with Iran. -

WASHINGTON — A day after the United States and Iran traded prisoners on an airport tarmac in Zurich, Switzerland, US national security adviser Robert C. O’Brien said President Donald Trump would like to hold unconditional talks with Iran, both to secure the release of the other Americans still held by Iran and to address US concerns about Iran’s nuclear program and destabilizing regional behavior.

“The president has offered to talk to the Iranians without preconditions about a whole range of issues,” O’Brien, who previously served as Trump’s hostage envoy, told CBS' Margaret Brennan in an interview today on "Face the Nation."

“We'd like to sit down and talk to them,” O’Brien continued. “But the sanctions and the maximum pressure are not going to be let up until Iran abandons its nuclear program and abandons its malign activities in the region. In the meantime, we'd love to sit down with [the Iranians] and talk about the other detainees. We want to get every single American home.”

Al-Monitor understands that Bill Richardson — a former New Mexico governor and former US ambassador to the United Nations — played a key role in helping advance negotiations for the swap that led to Iran’s release of Princeton scholar Xiyue Wang, who had been detained in Iran since 2016. In exchange, the United States dropped charges against and released a prominent Iranian stem cell scientist, Massoud Soleimani, who was arrested in the United States in 2018 while en route to take up a temporary research position at the Mayo Clinic.

Al-Monitor reported Nov. 1 that the US government was saying little following an unusually public Oct. 21 declaration by Iran’s Foreign Ministry that it was sending a list of names of Iranians being held in the United States for a possible “prisoner swap,” but behind the scenes, there were signs of movement.

Wang, who was born in China in 1980 and became a US citizen in 2009, was flown to Switzerland from Tehran on a Swiss government plane after being held in Iran’s Evin prison. He was met in Zurich on Saturday by US diplomats, including US Ambassador to Switzerland Edward T. McMullen Jr., acting US special presidential hostage envoy Hugh Dugan and US special representative on Iran Brian Hook, before being flown for medical checks to a US military base in Germany.

“Our family is complete once again,” Wang’s wife, Hua Qu, said in a statement. “Our son Shaofan and I have waited three long years for this day and it’s hard to express in words how excited we are to be reunited with Xiyue. We are thankful to everyone who helped make this happen.”

Soleimani, who flew to Zurich on the same flight as Hook, was met there Saturday by Iranian Foreign Minister Mohammad Javad Zarif, who said he was pleased that both Wang and Soleimani were going home to their families.

“Glad that Professor Massoud Soleimani and Mr. Xiyue Wang will be joining their families shortly,” Zarif wrote Saturday on Twitter. “Many thanks to all engaged, particularly the Swiss government.”

“We’re very happy to have our hostage back,” Trump said Saturday. “I think it’s a great thing for Iran. … It might have been a precursor to what could be done.”

“Thank you to Iran on a very fair negotiation,” Trump wrote Saturday on Twitter, adding: “See, we can make a deal together!”

The successful prisoner swap is an important confidence building measure that demonstrates to each other that both the United States and Iran can deliver on their promises, said Ali Vaez, the director of Iran programs at the International Crisis Group. But Vaez said it remains to be seen if the swap could be a prelude to broader negotiations to address the sources of heightened tension between Washington and Tehran.

“The Iranians have proven once again that when they say they can deliver, they will deliver,” Vaez told Al-Monitor. “I also believe it is an important signal to the Iranians that Trump can also deliver.”

“It’s a significant confidence building measure,” Vaez said. “However, there is no guarantee that it can turn into progress on broader areas of disagreement.”

Like Zarif, the United States thanked the Swiss government for its role in facilitating the negotiations that led to the swap, which a senior US administration official said intensified about a month ago.

“As far as how this came about, … the Swiss took a leading role in organizing these negotiations,” a senior US administration official, speaking not for attribution, told journalists on a call Saturday. “I think these negotiations on the specific release of Xiyue Wang have been ongoing … intensely for the past three to four weeks, but have been going on a bit longer than that. And, you know, we want to thank the Swiss for their efforts on that front.”

“We're hopeful that this … could lead to some momentum in obtaining the release of other Americans who are wrongfully held in Iran,” the senior US official also said.

Al-Monitor understands that Oman — which has been mediating between the Saudis and Iranians on the Yemen issue — did not play a role in these prisoner swap negotiations.

“Stakeholders on all sides should help secure the release of others and keep open a pathway,” Poblete said in a statement to Al-Monitor.