The United States government is saying little about Iran’s recent announcement it is sending a list of names for a possible prisoner swap, but there are signs of possible movement behind the scenes. 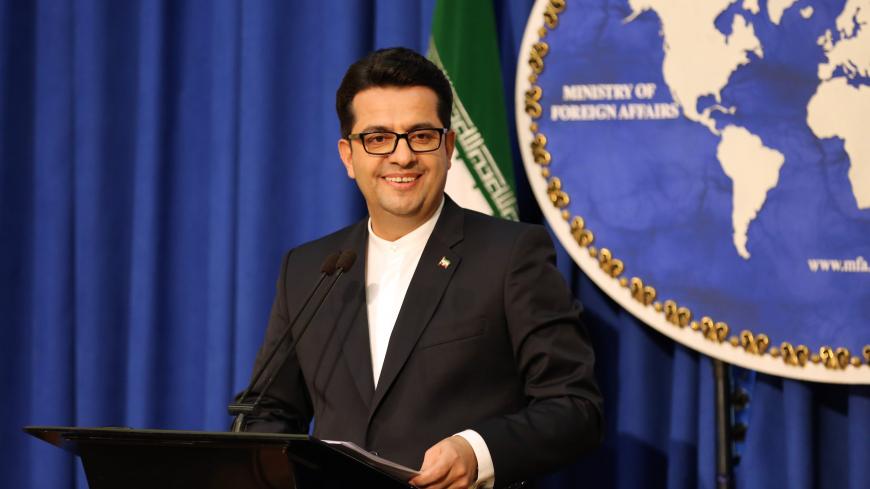 Abbas Mousavi, spokesman for Iran's Foreign Ministry, gives a press conference in the capital, Tehran, on May 28, 2019. On Oct. 21, Mousavi announced that Tehran is sending to Washington a list of names of Iranians being held in the United States for a possible prisoner exchange. - ATTA KENARE/AFP via Getty Images

WASHINGTON — The US government is saying little following an unusually public Oct. 21 declaration by Iran’s Foreign Ministry that it is sending a list of names of Iranians being held in the United States for a possible “prisoner swap.” But behind the scenes, there are signs of movement in two cases of Iranians held by the United States that the Iranians have expressed interest in.

"The recovery of hostages held by the Islamic Republic of Iran is a top priority for the US Government," a State Department official, speaking not for attribution, told Al-Monitor by email Oct. 31, in response to a query on discussions on a possible prisoner swap or negotiations to get US detainees released. The White House referred questions on the issue to the State Department.

Secretary of State Mike Pompeo is due to host an event at the State Department on Monday afternoon on the occasion of the 40th anniversary of the US Embassy takeover in Tehran, to which some of the families of Americans detained in Iran and their advocates have been invited, according to an invitation shared with Al-Monitor.

“We have handed over a list of names [to the United States] who must be freed,” Iran Foreign Ministry spokesman Abbas Mousavi told journalists in a briefing in Iran on Oct. 21. Mousavi said 20 Iranians are serving time in the United States under circumstances related to the circumvention of US sanctions against Iran.

The United States has sought the release of several Americans and Iranian-American dual nationals being held in Iran, including Princeton scholar Xiyue Wang; Iranian-American businessman Siamak Namazi and his father, Baquer Namazi, a former UNICEF official; Michael White, a Navy veteran; and Robert Levinson, a retired FBI agent who went missing on Iran’s Kish Island in 2007. Iran in June released Nizar Zakka, a Lebanese national and US permanent resident who had been held by Iran for four years.

Attorneys and advocates for families of Americans being held by Iran express hope that securing their clients’ loved ones’ release will be a top White House priority, especially given the fact that President Donald Trump’s choice to serve as his fourth national security adviser, Robert C. O’Brien, previously served as the US special envoy for hostage recovery. On Oct. 23, the White House announced that another member of O’Brien’s former hostage recovery office, career foreign service officer Matthias Mitman, was joining the National Security Council to serve as its executive secretary — essentially, the No. 3 official in the White House body. Mitman has previously served as a senior American diplomat in Saudi Arabia, Iraq, Honduras and Russia as well as three previous tours in the National Security Council, including as a director for Iraq.

“The one thing we keep repeating over and over again: Political will is essential,” Jason Poblete, an attorney for Zakka and Princeton scholar Wang, held by Iran in Evin prison since 2016, told Al-Monitor today. “The release of Americans and other foreigners held in Iran requires the same level of [US] attention as do other top-line issues we tend to hear about regarding Iran, such as nuclear weapons and nonproliferation, terrorism and related matters.”

“With political will, the hostages would be home by now,” Poblete added.

Behind the scenes, there are possible signs of movement regarding a possible US-Iran prisoner swap, though neither American nor Iranian officials acknowledge them as such. Those possible signs include the quiet release and deportation to Iran by a US judge in Minneapolis in late September of an Iranian woman who was previously deported to the United States from Australia on charges related to violating US export control laws. Negar Ghodskani, 40, was sentenced Sept. 24 to “time served for conspiring to illegally export restricted technology from the United States to Iran. Her attorney, Robert Richman, told The Associated Press that Ghodskani was put on a plane after her sentencing hearing [in Minneapolis] and was back in Iran” the next night (Sept. 25), the news agency reported.

Iran has also recently publicly raised the case of a prominent Iranian stem cell scientist, professor Masoud Soleimani, who was arrested in Chicago in October 2018 on a sealed US indictment while traveling to United States to serve as a fellow at the Mayo Clinic in Minnesota, on two counts of conspiring to export goods to Iran without authorization. Soleimani also had his US visa revoked at the time of his arrest.

We hope to hear “good news soon” regarding Soleimani, Iranian Foreign Minister Mohammad Javad Zarif was cited as saying Oct. 21 when the Iranian Foreign Ministry announced it was sending the United States a list of names for a possible prisoner swap. "We hope that these efforts, if paired with goodwill, would pay off soon and we would see freedom of Dr. Soleimani and other Iranians from the Americans' captivity,” Foreign Ministry spokesman Mousavi said.

There are several unusual aspects of Soleimani’s case, including that the indictment remains sealed. The office for a defense attorney for Soleimani in Atlanta, Leonard Franco, contacted by Al-Monitor on Nov. 1, said he was not at liberty to discuss the status of his client, who was previously reported to be being held in pretrial detention near Atlanta.

But a source familiar with the cases of several individuals being held in the United States and Iran, speaking not for attribution, noted that a court filing dated Oct. 18 granting permission to a former student of Soleimani’s, Mahboobe Ghaedi, also indicted in the United States on that case and released on pretrial bond, to travel to Europe. Ghaedi’s request to the court to travel abroad was unopposed by prosecutors, the court filing said.

A possible further sign of US-Iran diplomatic exchanges on the issue could be the presence in Washington this week of the Swiss ambassador to Iran, Markus Leitner. With no formal US-Iran diplomatic relations, Switzerland serves as the US diplomatic protection power in Iran.

Zakka, the U.S.-based Internet freedom advocate released by Iran in June, told Al-Monitor he has heard of proposed negotiations that would involve releasing hostages held by Iran in groups based on their nationality: American, European, British.

He said he thought O’Brien’s elevation to national security adviser is a sign “that the US is focusing more on the hostages,” adding that he thought obtaining the release of US nationals held in Iran would be a significant and welcome achievement for the Trump administration.

Ali Vaez, director of Iran programs at the International Crisis Group, welcomed signs of possible movement toward US-Iran negotiations to obtain the release of those unjustly detained.

“It really appears that with O’Brien becoming national security adviser, that the path to negotiating a prisoner release has reopened, and I think that is a good thing,” Vaez told Al-Monitor.

With recent efforts by French President Emmanuel Macron to broker US-Iran negotiations having seemingly stalled, Vaez said, “This is the only issue that could bring the parties back to the negotiating table, and it has the potential of opening the door for broader agreement.”

Another US advocate for the detained, speaking not for attribution, expressed frustration that, despite periodic announcements by Iran suggesting interest in prisoner swap negotiations, that the Iranians had not, in his opinion, been receptive to previous US overtures to discuss the issue.

“The real issue is the United States has been trying to engage with the Iranians at all levels, starting with the president on down, when they put forward claims they want to talk about prisoner swaps, but Zarif doesn’t have the authority to engage in any of these discussions,” the advocate said. “They have all come to nothing.”