The Iranian judiciary seems to have gotten serious about fighting corruption with speedy trials and harsh verdicts for powerful businessmen once thought untouchable. 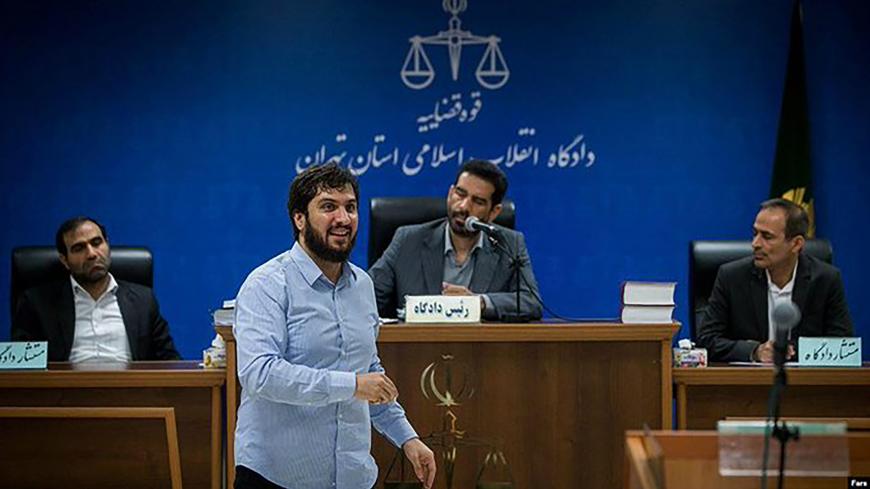 Defendant Hadi Razavi is seen during a court session, Tehran, Iran, in this image uploaded May 21, 2019. - Twitter/@pesareiran9

Iran's judiciary has announced numerous prison sentences for a large number of defendants charged with "disrupting the country's economic order."

The rulings announced July 30 include prison terms of up to 20 years. In one case, more than a dozen public servants working for a government institution in the northern Gilan province were found guilty of embezzlement and bribery. And last week, 19 individuals received a combined 150 years over the notorious corruption case involving Padideh Shandiz, an enormous economic project in the conservative northeastern city of Mashhad.

But what most gripped the public attention was the controversial case of Hadi Razavi, the 35-year-old son-in-law of Mohammad Shariatmadari, a veteran Reformist politician currently serving as minister of labor in President Hassan Rouhani's administration.

Razavi has been handed a 20-year prison term without the right to appeal after being convicted of multiple fraud charges. When Razavi's trial kicked off, it reignited furious public debates on decades of cronyism in the Islamic Republic, where well-connected individuals abuse power for massive profiteering. According to prosecutors, the young tycoon received millions of dollars in loans without any collateral and lavished public funds on fancy cars and luxury tours across Europe.

The judges who issued the hefty verdicts earned praise for dodging pressure from powerful politicians. Hard-line media outlets, in particular, praised the judiciary for "reviving hope among commoners" by upholding justice. Kayhan, which has persistently pushed for nothing less than the execution of people it describes as "economic terrorists," lauded the judges for their merciless treatment of defendants with political connections.

After the reimposition of US sanctions in the wake of the Trump administration's departure from the Iran nuclear deal last year, unprecedented chaos hit the country's markets and rampant corruption in Iran came under the spotlight. Amid reports of widespread fraud at a time of crippling hardships and public discontent, Supreme Leader Ayatollah Ali Khamenei issued a decree granting greater authority to the judiciary to set up special tribunals for an accelerated war on corruption, a program intensely pursued by recently appointed judiciary chief Ebrahim Raisi. Tightening the noose around "corrupt elements," those courts have issued 978 verdicts since last August, including nine death sentences and four of life imprisonment.

Feeling the pinch of Western sanctions, ordinary Iranians have been closely monitoring the financial scandals that implicate children of some wealthy politicians, known as "Aghazadehs" — a Persian epithet for "children of the noble ones." Their public remarks have sparked immense backlash every now and then. Last year, one boasted about finding success because he bore "good genes." The phrase has not stopped trending since and continues to be used for anyone who takes advantage of nepotism.

The Iranian judiciary has been traditionally controlled by hard-liners and reports solely to the country's supreme leader, leaving many wondering if the anti-corruption drive will transcend the political divide and remain nonpartisan. There are also lingering questions about some proceedings based on coerced confessions. For the war on corruption to be genuinely successful, calls are already growing for the judges to dig deeper.

"Razavi's trial was a giant step forward. But the likes of Razavi will continue to grow and emerge unless the roots of the corruption tree are dried up," one Iranian tweeted.