Iran's judiciary is prosecuting individuals accused of corruption and embezzlement on a scale unheard of in the country. 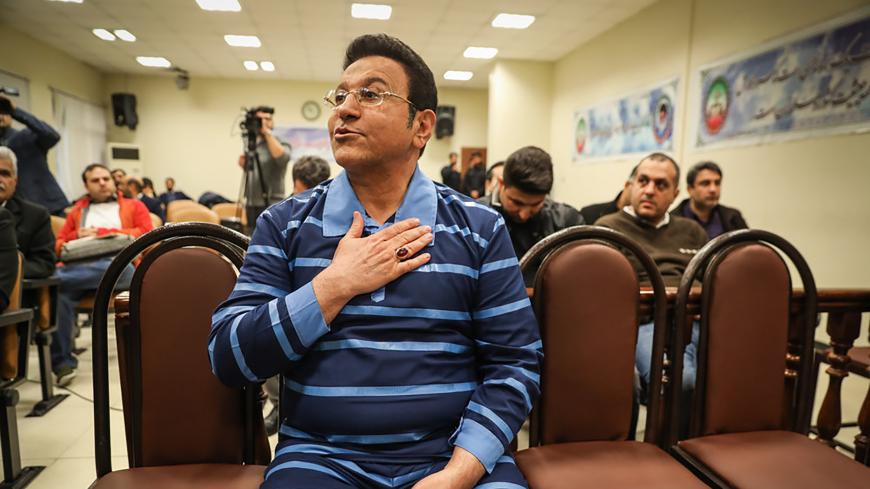 The long arm of the Iranian law seems to be reaching individuals accused of misusing political connections for personal profit at a time when the economy is under severe strain due to mismanagement at home and reimposed US sanctions.

The latest in a series of "special trials" opened in the past year was that of Hossein Hedayati, also known among Iranians as the "ATM" of the country's soccer clubs. The business tycoon was handed a 20-year jail term and 70 lashes in public as well as a ban from public service and ordered to repay 4.88 trillion rials ($116.2 million) in loans he illegally received from Sarmayeh Bank, a private enterprise that has been posting enormous losses.

Whopping loans from the same bank also implicate Hadi Razavi, the son-in-law of top Reformist politician and current Minister of Labor and Social Welfare Mohammad Shariatmadari, in blatant nepotism. Razavi's ongoing public trial has grabbed tremendous media attention due to the nature of his alleged corruption and the comments he has made in the proceedings. Aside from refusal to repay 1.07 trillion rials ($25.5 million) in loans, prosecutors say, the 35-year-old wasted public funds during trips he made across Europe along with his female secretary, a charge Razavi denies, insisting that his visits to Germany, Austria and elsewhere were not for leisure.

Amid a backlash against Razavi across social media, a video has surfaced in which he makes comments typical of the conservative camp in praise of Iranian forces fighting in Syria. During the interview, Razavi argues that all Iranians owe their security to the bravery of "the defenders of the shrine," the moniker for Iranian-backed fighters in Syria. Those comments juxtaposed with alleged fraud have enraged many social media users, who accuse him and many others of hypocrisy and seeking to hide behind a veil of religiosity and pro-establishment gestures.

Media outlets on both ends of the political spectrum have welcomed the judiciary's crackdown on corruption. Hard-line Kayhan, affiliated with the supreme leader's office, praised the justice system for "reviving hope among ordinary Iranians" by holding corrupt giants "in its claws." Kayhan has repeatedly demanded that ringleaders of "economic sabotage" be sentenced to death. This argument has been challenged by many observers, who found in the iron fist no effective long-term solution to deep-rooted corruption.

The crackdown has not spared the former governor of the Central Bank of Iran, Valiollah Seif, who is under investigation for allegedly mishandling the country's monetary system. Seif’s ex-deputy for foreign currency affairs has reportedly been in detention for months now and awaiting formal proceedings for his alleged failure to regulate Iran's foreign exchange reserves, which saw unprecedented turbulence from April 2018 through the May 2018 US withdrawal from the nuclear deal and continuing to today. The defendant, Ahmad Araghchi, is the nephew of senior nuclear negotiator and Deputy Foreign Minister Abbas Araghchi.

According to a report released by Reformist daily Seday-e-Eslahat, the Iranian judiciary has been busy processing 32 cases of major corruption over the past year. Most of the files implicate individuals who are connected to the country's top political elite. Two such notorious cases involve a brother of President Hassan Rouhani and a brother of First Vice President Eshaq Jahangiri.

Last August, as fresh corruption cases shocked the nation and made one headline after another, former judiciary chief Sadegh Amoli Larijani requested "special permits" from Supreme Leader Ayatollah Khamenei to tackle financial fraud and implement harsh Islamic justice for offenders. As those permits were granted, several tycoons were quickly put to trial and hanged, among them individuals nicknamed "sultans" of their business sectors who complained of scapegoating. With the so-called sultans of gold coins and tar gone, others could follow.