The remaining parties to the 2015 Iran nuclear deal are not yet prepared to trigger the accord’s dispute-resolution mechanism over Iran’s decision to reduce its compliance to protest crippling US economic sanctions. 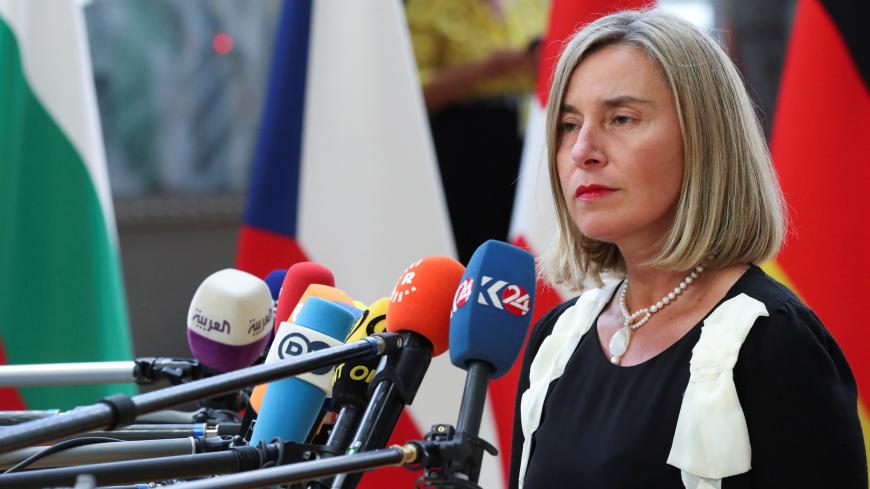 The remaining parties to the 2015 Iran nuclear deal are not yet prepared to trigger the accord’s dispute-resolution mechanism over Iran’s decision to reduce its compliance to protest crippling US economic sanctions, the European Union foreign policy chief said Monday.

The cautious response by the five world powers that remain in the deal after the Donald Trump administration’s withdrawal last year is testament to their assessment that Iran is reacting only after the United States in May imposed a virtual blockade on Iranian oil exports even while it has fully complied until now with the accord. It comes as Secretary of State Mike Pompeo said he had granted his Iranian counterpart, Iranian Foreign Minister Mohammad Javad Zarif, a limited visa, restricting his movements to attend United Nations-related meetings in New York this week.

“US diplomats don’t roam around Tehran, so we don’t see any reason for Iranian diplomats to roam freely around New York City, either,” Pompeo told The Washington Post in an interview Sunday. “It’s absolutely appropriate that we provide Foreign Minister Zarif and his delegation with all the rights that they are due under the UN headquarters agreement, and nothing more than that.”

The visa, issued in Bern, Switzerland, only on Saturday after uncertainty whether it was going to be granted, restricts Zarif’s movements to the UN headquarters, the Iranian mission to the UN in New York six blocks away, and the official Iranian residence, The Washington Post report said. Pompeo expressed resentment of the think-tank meetings and media interviews Zarif grants in New York, and the secretary of state said he would like to get on Iranian television to talk to the Iranian people.

“Zarif … uses the freedoms of the United States to come here and spread malign propaganda,” Pompeo complained. If Pompeo received an offer to go on Iranian television, he would accept, he said, and tell Iranians “that we’re supportive of the Iranian people, that we understand that the revolutionary theocracy is not acting in a way that is in their best interest.”

The message from the meeting of 28 EU foreign ministers in Brussels suggested they hold Washington as responsible or at least more responsible for Iran’s recent steps to reduce its compliance with the nuclear accord as Tehran.

For the time being, none of the remaining parties to the Joint Comprehensive Plan of Action (JCPOA) have deemed it “significant noncompliance” that Iran has exceeded the 300 kilogram (660-pound) cap of its low enriched fuel stockpile and increased its level of uranium enrichment to over 4%, EU High Representative Federica Mogherini said in Brussels on Monday. She noted that the steps Iran has taken to date are reversible. The EU bloc regrets Iran’s decision and invites Iran to reverse the steps, she said.

“When it comes to the dispute resolution mechanism,… it is the mechanism that is foreseen in the agreement in case of significant noncompliance,” Mogherini told journalists following a meeting of 28 EU foreign ministers in Brussels on Monday. “For the time being, none of the parties to the agreement have signaled their intention to invoke this article, which means that none of them is for the moment … considering the noncompliance a ‘significant’ noncompliance. We have also noticed that all the steps that have been taken by Iran are technically reversible.”

“We want to see Iran go back to full compliance as it has been in these years,” added Mogherini, an Italian diplomat who is due to finish her five-year term as the top EU foreign policy official at the end of October. Spain’s Foreign Minister Josep Borrell is seeking to succeed her in the top European foreign affairs job.

Mogherini, asked about Washington, said the United States was the most important EU ally, but she has tried to focus on the positive actions the Europeans can take to try to preserve the accord. And she suggested some in the Trump administration may regret that Iran is now considering breaching the deal the United States quit over a year ago.

“My approach has always been this: rather than focusing on the negative, trying to focus on what positive you can build,” Mogherini said. “And I think that for 14 months we have managed to hold all of this together.… I also think that today everybody realizes that not having the JCPOA in place anymore would be a terrible option for everybody, including those that have decided to get out.”

An EU official said it is not the EU foreign ministers who would decide whether to deem Iran in significant noncompliance with the JCPOA, triggering the dispute mechanism, but the Joint Commission that oversees JCPOA implementation. The seven-member Joint Commission includes the EU as well as Britain, France and Germany, in addition to Russia, China and Iran.

“Let me make clear that the EU foreign ministers did not decide to hold off a decision on the mechanism,” the EU official, speaking not for attribution, told Al-Monitor. “It’s the members of the Joint Commission … that can trigger it. Simply no one as of now has asked to activate it.”

Congress discusses 'strategic opportunity' for US vaccines in MidEast