The new British government led by Boris Johnson's expresses support for the Iran nuclear deal as the pact faces a possible new obstacle involving the reduction of proliferation risks at Iran’s Fordo and Arak facilities. 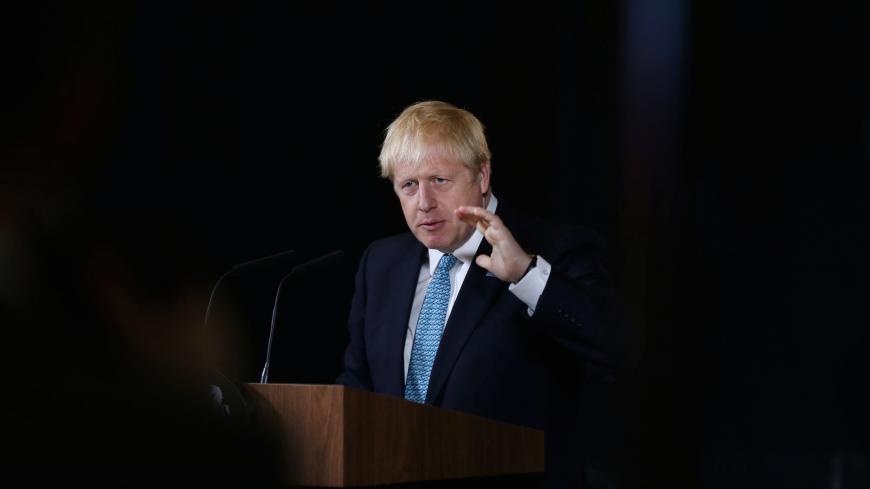 British Prime Minister Boris Johnson gestures during a speech on domestic priorities at the Science and Industry Museum in Manchester, Britain, July 27, 2019. - Lorne Campbell/Pool via REUTERS

WASHINGTON — The new UK government led by Prime Minister Boris Johnson expressed continued support for the Iran nuclear deal at a crisis meeting of international powers trying to save the 2015 accord. The signal of support from the more populist Johnson government takes place as the deal has come under mounting strain after President Donald Trump withdrew from it last year and reimposed crippling sanctions. Iran, in response, more recently said it would take steps to reduce its compliance every two months until the deal's other parties delivered on the sanctions relief promised in the accord, formally known as the Joint Comprehensive Plan of Action (JCPOA).

“Glad to attend important meeting to press on the need for full Implementiaton of the JCPOA,” Caroline Hurndall, the head of the British Foreign Office's department for Iran and Iraq, wrote Sunday on Twitter. “The UK remains committed to the deal.”

The British diplomat’s comment retweeted the photo showing her attendance at a meeting of political directors at the seven-member Joint Commission overseeing implementation of the accord, held in Vienna on Sunday. The meeting — only the commission’s second since the Trump administration in May revoked waivers that previously allowed eight nations to continue importing reduced amounts of Iranian oil — was chaired by Helga Schmid, the European Union's deputy foreign policy chief. The meeting also included deputy foreign ministers and senior diplomats from France, Germany, China, Russia and Iran.

Iranian Deputy Foreign Minister Abbas Araghchi called the meeting “constructive,” but said Iran must be able to sell some oil in return for the curbs on its nuclear program it has observed under the deal.

“The atmosphere was constructive. Discussions were good,” Araghchi told reporters in Vienna after the meeting Sunday. “I cannot say that we resolved everything, I can say there are lots of commitments.”

“Since Iran is entitled to export its oil according to the JCPOA, any impediment in the way of Iran’s export of oil is actually against the JCPOA,” Araghchi said.

“It all boils down to oil,” a Western official who attended the Vienna meeting, speaking not for attribution, told Al-Monitor on Monday, adding that he interpreted the Iranian position as being that Iran’s return to full compliance with the accord depends on Iran's ability to sell its oil.

Iran, after notifying the other JCPOA parties in May of its intentions, in early July surpassed a 300-kilogram (660-pound) cap on its stockpile of low enriched uranium, and slightly exceeded the 3.5% level on the degree of purity of its uranium enrichment. It said it would take other steps in 60 days to further reduce its compliance if the other parties to the accord don’t step up to provide Iran more economic relief. The next Iranian deadline is early September.

“As we have said, we will continue to reduce our commitments to the deal until Europeans secure Iran's interests under the deal," Araghchi vowed Sunday.

The Iranian steps to date are reversible and not considered a near-term proliferation risk. So while the remaining parties to the accord have expressed deep regret at Iran’s actions and called for it to return to full compliance, they have not assessed that Iran is in “significant violation” of the pact or triggered the Joint Commission’s dispute-resolution mechanism.

A next obstacle to the accord could come, once again, from Washington, which is supposed to announce by Aug. 1 if it is going to renew or revoke waivers for work agreed to in the JCPOA to reduce proliferation risks at Iran’s Fordo and Arak facilities.

Diplomats from the E3 — the three European countries still in the deal, the UK, France and Germany — recently met with the US National Security Council and the State Department on the issue, Al-Monitor was given to understand. European officials, speaking not for attribution, suggested they received conflicting signals from the Trump administration about what to expect, with the NSC thought to generally oppose renewing the waivers and with the State Department suggesting that allies hoping for the waivers’ renewal might be pleasantly surprised.

State Department and NSC officials did not offer immediate comment in response to queries from Al-Monitor on Sunday and Monday about the waivers and about consultations with the E3 on the matter.

For now, the Johnson government that took office last week has signaled continuity with that of its predecessor led by Theresa May in mostly aligning itself with its E3 allies on Iran and supporting the JCPOA, even as the UK makes its exit from the EU its chief priority.

“There is no quid pro quo," new British Foreign Secretary Dominic Raab told BBC radio Monday, referring to talk of a possible swap of an Iranian oil tanker seized by the UK off the coast of Gibraltar this month for a British-flagged vessel subsequently detained in the Strait of Hormuz by Iran. "This is not about some kind of barter. This is about international law and the rules of the international legal system being upheld.”

Raab said the UK still supported the idea of setting up a European effort to protect maritime shipping in the Persian Gulf rather than joining a US-led effort, Operation Sentinel, under the auspices of the US Central Command. But the new top British diplomat disputed that the two efforts are in competition.

"This shouldn’t be some sort of geopolitical, EU versus US tussle,” Raab said. “This should be (about) what puts us in the best position with the widest group of international actors to uphold the rule of law.… It would be important for the European-led initiative to have US support to make it viable."

“There is very little reason to think Boris Johnson will move toward Trump on Iran, climate change, immigration, and other thorny issues,” Thomas Wright, director of the Brookings Institution’s Center for the US and Europe, told Al-Monitor by email. “He's always been very centrist on those issues. He could change to appease Trump, but that would help [UK Labour Party leader Jeremy] Corbyn in the election. So I think he'll hope that his personality will be enough to bring Trump on board, but he won't give him anything substantive. [It is] also worth noting that he was a strong supporter of the JCPOA while foreign secretary.”