Theories about the motivation behind an escalation of attacks in the Sinai peninsula say that terrorists could be aiming to distort Egypt’s image abroad — especially in light of an international soccer tournament — or that they might be retaliating for the trial of a high-ranking Islamist militant. 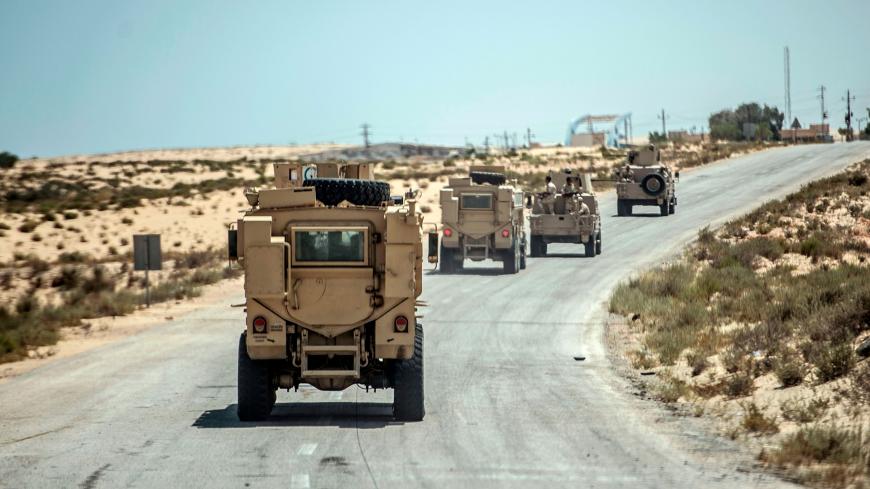 CAIRO — Recent terror attacks in Egypt's Sinai Peninsula have security forces on guard, especially as the country hosts the Africa Cup of Nations soccer competition, which is expected to draw some 50,000 tourists to six locations in Egypt this year. Security is a sensitive subject with Egyptian officials, and multiple deadly Sinai attacks in June haven't helped cultivate the image the country wants to portray.

A June 26 terrorist attack left seven policemen and four militants dead, according to an Interior Ministry announcement that day. The assault targeted a police checkpoint southwest of el-Arish in the northern Sinai Peninsula. A police statement mentioned that one of the militants died after his explosive belt detonated. The police confiscated several explosive belts, hand grenades and other weapons from the scene. No group has claimed responsibility for the attack so far.

The terror attack was the peninsula's third in June.

On June 5, militants attacked a checkpoint, resulting in the death of eight policemen and five militants, according to an Interior Ministry statement. The Islamic State-affiliated Wilayat Sinai (Province of Sinai) claimed responsibility. The next day, the ministry said, officials arrested some of the alleged attackers at a house in el-Arish. During that raid, 14 militants died. Police said they found in the militants’ possession 14 machine guns, two explosive belts and three other explosive devices.

Another attack took place June 13, when armed men kidnapped two Egyptian lawyers and a number of citizens in northern Sinai. The BBC quoted legal sources and witnesses as saying that masked men kidnapped the civilians in two separate events near the international road linking el-Arish to Bir al-Abed. Lawyers Mahmoud Said Lotfi and Kamal Awad were among the kidnapped, in addition to factory workers and other people. Egyptian security authorities didn't comment on the kidnapping incidents, but on June 15, the Sinai Tribes Union organization announced three of the men had been released; the lawyers weren't among them. It remains unclear who was behind the kidnapping.

The Egyptian Ministry of Justice accepted a request from the Egyptian Lawyers Syndicate to delay processing all cases related to the northern Sinai attacks in the hopes of not provoking other attacks, Sameh Ashour, head of the Egyptian Bar Association, told the BBC.

Khaled Okasha, head of the Egyptian Center for Strategic Studies, told Al-Monitor he believes the recent escalation in Sinai attacks is related to Libya handing over to Egyptian authorities Hisham el-Ashmawy, a senior Islamist militant and former Egyptian special forces officer. Ashmawy, who is accused of numerous terrorist attacks, was returned to Cairo in May.

Despite recent attacks, Okasha says officials have prevented many others since February 2018, when the army launched a wide-scale campaign called “Comprehensive Operation – Sinai 2018” aimed at eradicating Sinai terrorism. The operation came in response to the infamous November 2017 attack on a Bedouin mosque in al-Rawda, which killed 305 people. According to Okasha, were it not for the campaign and police launching preventive strikes, terrorist attacks would have increased

"Comprehensive Operation – Sinai 2018 played a great role in reducing the frequency of terrorist attacks. Despite the fact that attacks are still occurring, their impact has been greatly attenuated compared with the past," Okasha told Al-Monitor.

He said that no matter how tight security precautions are, sudden attacks can't be prevented, but that police raids and preventive strikes against militants in June prevented those militants from penetrating the security barriers and further infiltrating Arish, which would have caused more crimes against civilians.

Said Sadiq, a political sociology professor at the American University in Cairo, said the recurrence of terrorist incidents in Sinai aims to cripple Egyptian security during the Africa Cup of Nations, which began June 21 and ends July 19. The surge in attacks also coincides with Egypt’s term in presiding over the African Union, he said, adding that such attacks harm Egypt's image, making it seem incapable of providing security for its own citizens.

Sadiq told Al-Monitor, “The latest terrorist attack [June 26], which led to the killing of seven policemen, has affected the internal Egyptian situation, especially after the news was published internationally. ... The attack pushed security forces to impose more security in the capital. Fans coming in and out of stadiums were searched, and the areas were secured around the [soccer] stadiums where the matches of the Africa Cup of Nations take place.”

Sadiq stressed that the militants’ strategy depends mainly on choosing the right time to achieve the greatest political and security impact. He pointed out that the last incident was a few days after the start of the soccer tournament, and the kidnapping of the Egyptian lawyers came eight days before the events started. He noted that the early June attack came on Eid al-Fitr, the holiday marking the end of Ramadan fasting.