Can Iraq get its water wheels on UNESCO World Heritage List?

Local academics believe that water wheels, used all around the world, were discovered on the banks of the Euphrates River in Anbar province and should be on the World Heritage List. 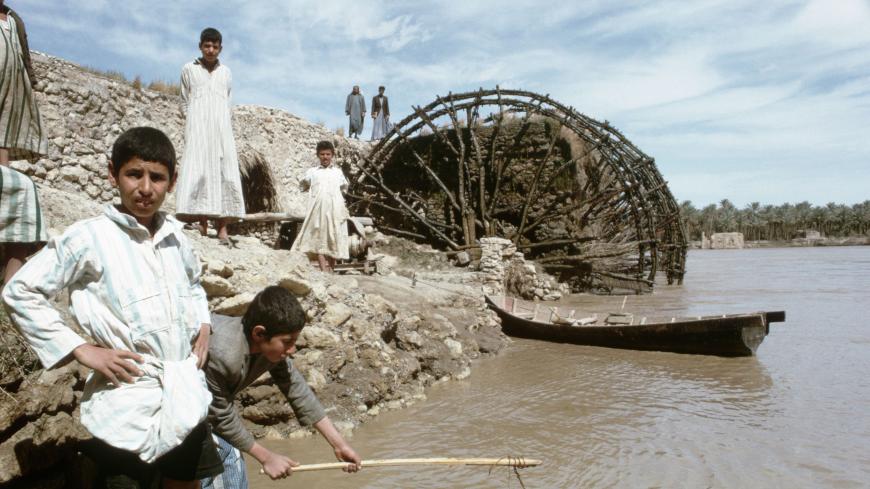 Young boys stand on the banks of the Euphrates River near an ancient water wheel. Hit, Iraq, Dec. 1, 2018. - Dean Conger/Corbis via Getty Images

Iraq has been working for the last three months to rehabilitate its historical norias in Hit, a city located in western Iraq on the banks of the upper Euphrates River. The Iraqi government aims to inscribe these water wheels, which played an important role in the irrigation of the land for centuries, on UNESCO's World Heritage List.

The water wheels of Hama in Syria, known as the "Norias of Hama," have been on UNESCO's tentative list — the earliest stage of inscription to the heritage list — since 1999.

Though norias, or water wheels pulled by livestock or the force of the water itself to transmit water from wells or rivers to irrigate the fields, can be seen around the world, their birth place is Iraq, claims Qahtan Mohammad Saleh al-Hiti, who teaches at Al-Ma’arif College in Ramadi, Anbar province.

Hiti, who has carried out extensive research on the history of Hit and its water wheels, told Al-Monitor that some early form of these wheels were discovered by the residents of the city of Hit, whose foundation dates back to 2300 B.C.

Hiti said that the water wheels similar to the ones we use today were invented on the banks of the Euphrates around 200 B.C., to enable irrigation even when the water level of the Euphrates River receded. "It was a great innovation that made agriculture in the Fertile Crescent even more prosperous," he said. Though the first water wheels were modified over the centuries, the basic design was used well into the late 20th century, until new dams, political instability and violence delivered a heavy blow to the region’s agriculture.

Writer Sabah Naahi explained in a recent article published in Al-Arab that the norias were an integral part of the rich agriculture in the area. However, dams built upstream lowered the river bank of the Euphrates, then strife, unrest and wars in Iraq and Syria delivered a heavy blow to Anbar province's agriculture. Locals fled after the Islamic State took over the area, which led to the total collapse of agriculture and water wheels became obsolete, uncared for and slowly rotted away.

With renewed focus on the region's rich heritage, both local authorities and Baghdad turned its attention to the region’s water wheels. In April, the members of a committee formed by Anbar province and charged with reviving heritage and archaeological sites met with officials from the local government to see whether they can continue with the renovations of the water wheels in the region, most of which are under private ownership. By April 29, the Ministry of Water Resources successfully completed the restoration of a water wheel in Turba area on an island in Hit.

Abdul Mon’im Abdul Aziz al-Dousri, a member of the High Central Committee to Revive Heritage and Archaeological Sites and a firm advocate for restoring the norias, spoke to Al-Monitor about the need to have a comprehensive plan to restore the ancient water wheels and inscribe them on the World Heritage List.

Dousri said that he has prepared a 16-step plan to rehabilitate the water wheels and submitted it to the advisory board of Anbar province. His report suggests rehabilitating the norias while keeping intact the original structure made of mulberry trees. “This is the only wood suitable to build norias,” he specifies in the report. He also urges that craftsmen with experience in building norias are selected for the renovation works.

The main challenge is finding the funding to restore the norias. “We need support from UNESCO to keep this heritage," Dousri said, urging the government to bring the file before the United Nations' cultural arm. "The government also needs to provide funding so that the owners can repair and maintain them,” he added.

The general director of the arts department at the Iraqi Ministry of Culture, Tourism and Antiquities, Ali Iwyed al Abbadi, told Al-Monitor that his department has already launched a media campaign on the historical value of the water wheels and organized a photo exhibition.

“[We] held an exhibition on April 10 with photographs demonstrating the techniques of building norias and how they were used throughout the ages,” he said. The ministry also launched a project whereby the craft of noria restoration is taught to the younger generation, so the skills of building and repairing norias would not be lost.

Building water wheels may also be added as a course to the curriculum of the Baghdad-based Institute for Traditional Crafts and Arts, he added.

Hit’s District Administrator Mohannad al-Hiti told Al-Monitor, “The Ministry of Water Resources made field visits to assess the damages [to the existing water wheels] so that they can determine what needs to be done to restore them. The ministry then submitted a report to the prime minister [who approved the project and supports the plans to nominate it for the World Heritage List].”

Iraq has six sites inscribed on the UNESCO World Heritage List. The last addition was Babylon, the ancient capital of many civilizations. To be on the list, the site has to be placed first on UNESCO's tentative list and then present a detailed nomination file on its heritage and the government's plans to develop it.

“Putting the water wheels on the UNESCO list is the dream of the city,” Taha Jazza, an academic at the Educational Research Center and a native of Hit, told Al-Monitor. “But this requires great efforts and tireless work by the residents of this historical city, as well as the support of the ministries and government entities. The Ministry of Water Resources has overseen the rehabilitation of the Radi’an family norias. [But we need to follow up] with the support of the Ministry of Culture, Tourism and Antiquities which could initiate this discussion with UNESCO in order to acquire the necessary support.”

He said that he believed this would encourage attracting tourists to the city. “The city would open up to the world after years of damage and isolation in the hands of extremist groups taking control of its resources,” he explained, adding that tourists from neighboring countries and beyond could find many historical and tourist delights in the city.