In order to better protect them, the Iraqi government is pressing for the inclusion of Iraq's wetlands as well as the Ur, Eridu and Uruk archaeological sites on the UNESCO World Heritage List. 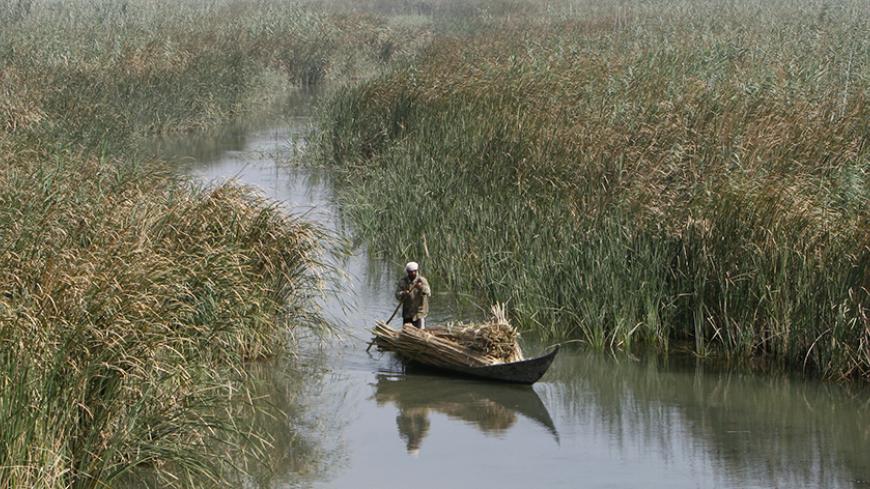 A man paddles a boat loaded with reeds gathered at the Chebayesh marsh in Nassiriya, southeast of Baghdad, July 27, 2008. - REUTERS/Saad Shalash

BAGHDAD — The archaeological sites of Ur, Eridu and Uruk as well as the Iraqi marshlands are under consideration for UNESCO's World Heritage List. The decision will be made at the World Heritage Committee meeting to be held July 10-20 in Turkey, where the UNESCO member states will vote on adding new sites to World List.

On June 1, the committee announced its program to pursue this matter and work toward getting the Iraqi marshlands on the World Heritage List.

The marshlands face drought as desertification plagues the country. The water level of the Tigris and Euphrates Rivers has fallen due to damming by Turkey and Iran on the rivers and their tributaries.

Iraq's wetlands, known as the Mesopotamian marshlands, are located in the areas surrounding the confluence of the Euphrates and Tigris Rivers in the provinces of Basra, Maysan and Dhi Qar in southern Iraq. Eridu, Ur and Uruk are archaeological sites dating back to the Sumerian civilization.

Faleh al-Khozai, a parliament member for Basra province on the parliamentary committee for tourism and antiquities, told Al-Monitor, “The archaeological sites in southern Iraq and the marshlands deserve to be part of the World Heritage List. They date back to the great Sumerian civilization, which gave mankind many scientific discoveries and innovations. These sites are unparalleled attractive tourist areas.”

He went on, “Achieving this goal would give these sites many privileges. Their inclusion in the World Heritage List would turn them into international sites and promote tourism activity as a source of income for the country, which will revive the economic situation. This may provide these cities with international protection from wars and acts of terrorism.”

It should be noted that inclusion on the World Heritage List means that archaeological and heritage sites would be managed by UNESCO, which will preserve the sites and provide them with financial aid under the World Heritage Convention signed in 1972 by 189 countries.

On the odds of success, Khozai said, “The World Heritage Committee will likely vote in favor of Iraq, given that these sites meet all of the necessary conditions to be inscribed on this list. They are natural, historical and cultural sites. They are a magnet for tourism and they need international care.”

Hamid al-Ghazi, head of the provincial council of Dhi Qar, where a large part of the marshlands area is located, said in a June 2 statement that so far, 20 out of 195 member states support the inclusion of the Iraqi archaeological sites and marshlands on the World Heritage List and will vote in favor of Iraq at the World Heritage Committee meeting.

The statement went on to say that an official invitation was sent to the chargé d'affaires of the Holy See to Iraq Monsignor George Panamthundil, the French ambassador to Iraq, and more than 20 other ambassadors to visit the archaeological city of Ur and the Dhi Qar marshes with the Iraqi foreign minister and a delegation from the presidency and the concerned ministries.

In parallel, other Iraqi governmental bodies and nongovernmental organizations are busy with media activities and campaigns to support the inclusion of the Iraqi sites and marshlands in the World Heritage List.

Laith Shubbar, the head of the Development Center for Energy and Water, told Al-Monitor, “The center created a media campaign using the hashtag #YourVoteForYourNation to support the marshlands and is now organizing art activities and events for this purpose.”

He added, “These events include a 1,000-meter painting that will be the longest painting in the world, drawn by children and calling for supporting the inclusion of the marshlands on the World Heritage List.”

He pointed out that French Ambassador Marc Baretti toured the marshlands May 31 as part of a campaign event, suggesting that his country may support the campaign to have it listed as a UNESCO world heritage site.

Iraqi antiquities are being plundered in smuggling operations and have been vulnerable to sabotage and terrorism after Saddam Hussein’s fall in 2003, after which the Iraqi antiquities museum was looted along with various archaeological sites in an environment of security chaos and governmental neglect. These sites continue to lack proper maintenance and protection.

The economic blockade imposed on Iraq by the United Nations in the 1990s halted the archaeological exploration of dozens of ancient cities in Mesopotamia dating back to the Babylonian, Assyrian, Sumerian and Akkadian civilizations.