What is Russia's strategy in Idlib?

Russia is playing the long game with Turkey in the battle for the Syrian provence of Idlib. 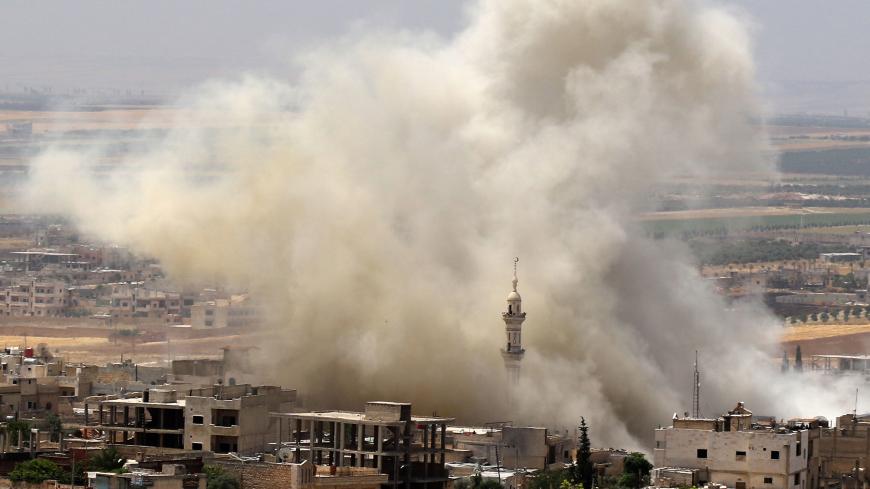 MOSCOW — Russia blocked a UN Security Council draft statement on Idlib on Monday. The statement, jointly sponsored by Belgium, Germany and Kuwait, condemned the ongoing offensive on civilians and infrastructure in the northwestern Syrian city.

The statement read: “The members of the Security Council condemned the loss of innocent civilian lives, and expressed their alarm at the displacement of over 270,000 persons as a result of the recent escalation, as well as the targeting of densely populated areas and civilian infrastructure.”

Russia's UN mission responded on Twitter: “We don’t agree that the situation in the #NorthWest can be viewed separately from [the] situation in other regions.”

"Moreover, the draft document completely ignored the fact that Idlib is controlled by the Hayat Tahrir al-Sham [HTS] terrorist group," the mission added, continuing, "We regret that our colleagues in the UN Security Council have chosen a biased approach to the developments in Syria. The so-called humanitarian 'troika' did not express concerns when the coalition illegally operating in Syria destroyed Khadjin or Baguz. The 'liberated' Raqqa still lies in ruins.”

The Syrian army assault in Idlib, supported by Russia, has been expected since last summer, yet it has only gradually materialized over the last couple of months. Russia is interested in helping President Bashar al-Assad retake control of all Syrian territory, including Idlib and the northeast. This, however, doesn't mean Moscow is happy about doing so militarily.

Initially, the standoff over Idlib presented Moscow an opportunity to play a big-picture foreign policy game with Turkey. Such a game would bring Moscow and Ankara closer on other issues, such as bilateral and military-technical cooperation. From the beginning, Vladimir Putin was willing to let Recep Tayyip Erdogan appear strong on the issue for his constituency, to help him win local elections. In September 2018, Putin had Erdogan sign the Sochi agreement on Idlib and assume some serious commitments, including fixing the HTS problem. Yet, from the outset, these commitments were hard to deliver in full.

Now that Turkey has largely failed to separate its loyal opposition forces from terrorist groups, and with Erdogan in a post-election cycle, Moscow has pressed harder for more robust action. Moscow feels the situation in Idlib is spinning out of control, as HTS consolidates its positions. The Russians themselves are under pressure from the Syrians — and the Iranians, to a lesser extent — because Turkey has failed to do what it promised.

All the objectives Russia says it now seeks with Turkey — joint patrols, peace talks, measures to curb HTS — are important steps in politically managing the situation. But they are not in the ultimate interest of Moscow. These steps are tools to play it "soft," with more respect and sensitivity toward Turkish positions. This is a fine line to walk, which Moscow had to learn the hard way, with the 2015 jet crisis. At the same time, Russia is sending all kinds of "military messages" to Ankara, carrying out bombings in Syria to pressure Erdogan. Though the Russians carefully avoid targeting Turkish positions, they turn a blind eye if the Syrians do.

Erdogan gets that Moscow expects him to play smart and avoid reckless moves, similar to the 2015 jet crisis. In phone conversations with Putin over the past few weeks, Erdogan blamed Damascus for driving a wedge between Moscow and Ankara. Erdogan later signaled to Putin that he understands that Russia is unhappy about Turkey's role in the HTS situation.

Remarkably, these phone conversations came days after reports that Turkey supplied arms to opposition groups in Idlib. According to Reuters, the arms were intended to help Turkey's loyal militants thwart a Russian-backed Syrian army attack after Ankara failed "to persuade Russia in recent meetings of a joint working group that it should end its escalation to avert a major influx of refugees pouring into Turkey, two senior opposition figures said."

A Turkish military convoy reportedly arrived on May 26 at a base in northern Hama near Jabal al-Zawiya, an area that Russian and Syrian jets have pounded for weeks. Turkey dispatched dozens of armored vehicles, anti-tank guided missiles, Grad launchers and TOW missiles to help militants retake the strategic town of Kfar Nabouda and push back the Syrian army. Ironically, some of the weaponry was Russian-made and delivered to Turkey by Russia under bilateral military contracts in the 2000s.

The news fueled the fires of indignation among some pro-Kremlin experts. Vladimir Evseev, a Middle East expert with the Russian Institute for Strategic Studies, argued that the multiple rocket launchers used by HTS to target the Russian air base could have only ended up in Syria via Turkey.

“The launchers that [the terrorists are] producing in Idlib don’t have proper capabilities for the range [to reach the base],” he told Nezavisimaya Gazeta on May 21.

“Ankara may be arming its allies from the so-called moderate opposition, and those guys may resell all that stuff to the scoundrels," he said. "This, however, in no way changes the essence of Erdogan’s policy in settling the Syrian crisis.”

At the official level, however, Moscow seeks every opportunity to engage Turkey on Idlib, making it clear that the situation is "about the two," meaning it should, could and will be settled by Russia and Turkey. No third party — especially the Americans or the Europeans — should be putting additional pressure on the Idlib situation, hence Russia’s rejection of the UN statement.

“Look, everyone is playing their own game here,” a senior Russian diplomat told Al-Monitor. “Americans are now seeking every opportunity to drive a wedge between us and the Turks. Erdogan’s statements look reassuring when it comes to the delivery of S-400, but things are uncertain on other potential military contracts, so the disputes we may be having with Ankara work well for them.”

He continued, “As for the Europeans, they want to create an impression they are still in the game and care. But for the lack of any better constructive options, all they can do is make statements and propose papers to oblige us with moral responsibility over the fight in Idlib. We are fighting terrorists there, and they should first take the plank out of their own eye before telling us to remove the speck from our eyes.”

“It goes without saying that bombardments by terrorists from Idlib are unacceptable and measures are being taken for neutralizing their fire emplacements," Peskov told media on June 3.

The only way to settle the crisis, he said, is to have Turkey adhere to the Sochi accords. “Russia maintains cooperation with Turkey, which is responsible for preventing such attacks [by terrorists] from Idlib," Peskov said.

The whole situation has been long coming. But as Russia expects it be solved via dealings with Turkey, Erdogan has his own views of what Russia should do. The two most common speculations in Moscow are that Erdogan is either anticipating a good proposal on northeast Syria — in this case, Idlib may be a bargaining chip on Kurdish matters. Or he is expecting a good proposal on Idlib itself — a proposal that would help Turkey maintain influence in that part of Syria, possibly through the incorporation of some of its proxy forces into a future local government. Either way, this may take a while, as the escalation in Idlib will likely mount.