Can Russia plug through US sanctions to reconstruct Syria?

Russia seeks to work around US sanctions to help reconstruct Syria, but some of Damascus' own policies may be unhelpful in this endeavor. 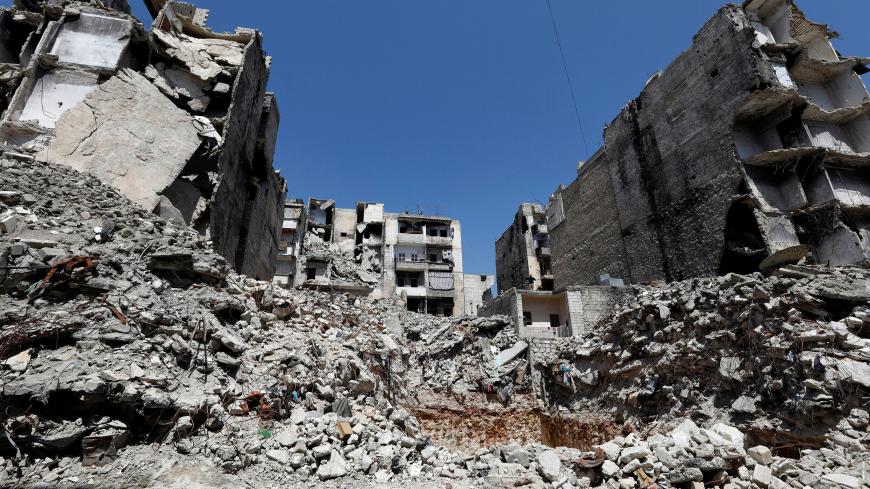 As the United States eyes new sanctions on Syria, Russia increasingly finds it needs to work out solutions that would nonetheless push forward the post-conflict reconstruction in the country the way Moscow envisions them.

Syria has been subject to legislatively mandated US penalties since the 1970s. In 1979, Syria ended up on the US list of state sponsors of terrorism that, among other things, placed a ban on exports of dual-use goods to Syria. Yet Washington preserved contacts with Damascus. When Bashar al-Assad, then a new reform-minded leader, came to power in the early 2000s, the idea of lifting the sanctions was considered on a number of occasions.

Back then, Russia was among those that lobbied the United States to lift the sanctions for the sake of Syria’s integration into the global financial system that would presumably help transform the Syrian elite into a responsible and predictable player. While ultimately under Assad Jr. Syria embarked on the capitalist path, the progress toward the reformed economy was uneven. Many things were also backsliding under the influence from outside, of which the US invasion of Iraq became the major external factor.

The sanctions that Syria faced under the Bush administration over the perceived role of Damascus as a problem to US Iraq policy targeted the export of American goods — except food and medicine — under the 2003 Syria Accountability and Lebanese Sovereignty Restoration Act.

These very sanctions, however, did not unlock their considerable potential until the outbreak of the Syrian crisis in 2011. Moreover, in August 2011, an executive order was issued to prohibit trade in services and dealings in or related to petroleum or petroleum products. The recent developments are related to the US ban on oil shipping to Syria by sea and imply penalties for “trade and other transactions” to the entities and individuals that provide support to the Syrian government, “including those who deliver or finance petroleum shipments to the government or government-owned entities, such as the US-designated Syrian Company for Oil Transport or Banias Refinery Company.” This, by extension, effectively placed many Russian ships transporting Iranian petroleum under the sanctions.

The challenge is further aggravated by the sanctions that Russia itself faces and even more so those that Iran has come to experience. All of this contributes to the continuing crippling of the Syrian economy.

Against this background, Russia could step up as an oil supplier to Syria, yet its companies, including state-owned corporations, observe the sanctions’ regime and feel reluctant risking any violations for the sake of Syria. The associated risks of being put on the lists administered by the US Department of the Treasury's Office of Foreign Assets Control are assessed as high, whereas the Syrian market is not seen as worth it, especially given the absence of short-term and medium-term profits from the transactions. What further complicates the picture is Damascus’ preference to borrow from Iran rather than Russia, and the fact that Syria cannot yet be self-sufficient given that the country’s largest oil fields are controlled by US-backed Kurdish forces.

Yet the Russian sanctions-restricted companies consider engaging in the rebuilding efforts. The only difficulty is how to arrange the money transfer. To address this issue, different ways of establishing the subsidiaries of the sanctioned banks are being worked out. One of the biggest recent moves in this area was the reported lease of the Tartous port to Russia. Later, however, Minister of Transport Ali Hammoud was reported as saying that this in fact was not the rental case. Instead, the investment contract totaling $500 million was concluded with Stroytransgaz, a Russian company that is under the US sanctions. Under the agreement, over the course of 49 years, the company will have been running the port and expanding its infrastructure. In addition, it is highly likely that the Syrian continental shelf of the Eastern Mediterranean has an oil reserve the likes of the Zohr, Leviathan and Aphrodite fields. Earlier, Russia and Syria signed two road maps on energy cooperation that can be recalled by Moscow as a legal basis for development of this potential field.

“Russia pursues political rather than economic goals in Syria. Given the context, the sanctions against Syria will not affect Moscow’s major policy,” Ivan Timofeev, director of programs at the Russian International Affairs Council, told Al-Monitor.

“The Russian policy in Syria is about to embark on a new stage,” a high-ranking Russian diplomat told Al-Monitor on condition of anonymity. “Regardless of the ongoing hostilities and war, we are about to enter the stage of resource and responsibility allocation to oversee the country’s economic rehabilitation.”

Some Russian and European policy institutions have already elaborated on ways to reconcile respective differences in this area. While Russia sees Syrian reconstruction mainly in terms of rebuilding the damaged physical infrastructure, European Union states link the reconstruction efforts to political transition.

Meanwhile in Moscow there are two competing views on how to aid Syria’s recovery. Some argue for the need of political reforms and power transition, while others suggest preparing the ground for Assad’s reelection in 2021. The latter scenario, however, is fraught with numerous complications that makes an increasing number of experts argue that Moscow needs a partial re-legitimization of the Syrian regime. Absent at least some reforms, the nation may be sent into another downward spiral of confrontation and hostilities or terrorist attacks. This would deprive Russia of its political and diplomatic gains and sway the gain from its presence in Syria.

All of this may soon be putting a lot of pressure on Damascus, and thus stress the need for Moscow to shift from exclusively military measures to a new mixture of military, political and economic tools.

“Moscow still has the task of developing a single coherent economic policy on Syria. The Russian approach is currently shaped by the demands of the Syrian market and earlier military and economic approach to the Syrian crisis. This needs a rethink and a change,” another high-ranking Russian diplomat told Al-Monitor on condition of anonymity.

This, in turn, implies a consistent updating of economic legislation in Syria, with the aim of making it more relevant for Russian business, primarily medium-sized enterprises, and joint projects. Given the need to bolster its position on the ground, Russia should not necessarily wait for the Europeans to join its rebuilding efforts.

In this context, developing the electric power industry is one area where Russia may be particularly helpful. State-run banks and other companies could grant loans to boost the country’s enterprises in a range of industries, which would be central to the Russian strategy on this track. On the whole, Russia’s relevant ministries and departments, together with their Syrian counterparts, should elaborate the loan-granting scheme for the most profitable and strategically important industries. That said, some in the Syrian establishment and among government officials still look to the West while cozying up to Moscow and dragging their feet concerning contracts with the Russians.