Former Fatah senior Mohammed Dahlan was not present at the Bahrain conference, but his fingerprints were all over it from his efforts to gather financial aid for the Palestinian Authority. 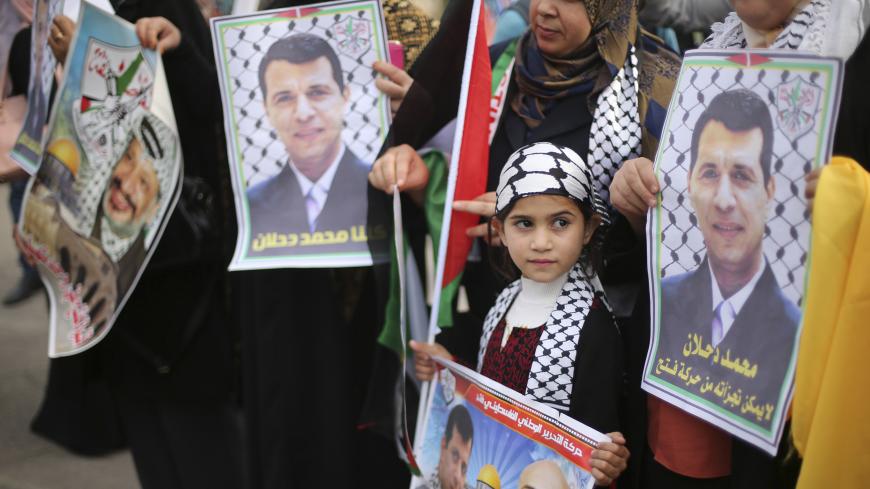 Two days prior to the June 25 US-led summit in Bahrain, finance ministers of the Arab League convened in Cairo at the request of Palestinian President Mahmoud Abbas in a bid to rescue the PA from collapse. The June 23 discussions produced a decision to provide the PA with $100 million in monthly economic aid, some of it as grants and some as loans.

Abbas’ appeal to the Arab League was likely intended to deflect some of the criticism directed at him within the PA for rushing to boycott the US economic plan presented in Bahrain, even though it would be wealthy Persian Gulf emirates offering most of the money and the aid would be provided through an international investment fund.

In the space of one week, the Palestinians have been deluged with an unbelievable bonanza: Tens of billions of dollars pledged in Bahrain and hundreds of millions in Cairo. Both groups also pledged infrastructure improvements in the West Bank and Gaza Strip, new industries and trade, employment projects and even a transportation corridor connecting Gaza and the West Bank.

Abbas has long been the target of extensive criticism in the PA. Polls conducted by the Palestinian Center for Policy and Survey Research indicate that most PA residents hope the 83-year-old leader will step down soon. Such sentiments are not voiced publicly, certainly not in the Palestinian media. Criticism of the president is taboo in the West Bank and those who dare express any could find themselves tarred as “enemies of the people” and risk imprisonment. Hints of displeasure with Abbas are found mostly on social media.

The only ones daring to express public criticism are those nicknamed “Jama’at Dahlan” or “the Dahlan band” — associates of exiled Palestinian leader Mohammed Dahlan, who has been living in Dubai since Abbas expelled him from the Fatah organization in June 2011. In exile, Dahlan has established aid funds for the Palestinians, raising most of the money in the Gulf states. His associates say that the ties he has formed helped Dahlan raise hundreds of millions of dollars used to rehabilitate refugee camps in Gaza and the West Bank, boosting his standing among wide swathes of the public, much to Abbas’ displeasure. Top PA officials claim Dahlan’s money is “tainted” and designed to establish an organizational infrastructure that will make him president.

The deteriorating economy has increased the persecution of Dahlan’s associates, and the more pressure Abbas’ security forces put on them, the more inclined they are to speak out. They feel they have nothing to lose and have to fight for their future and rightful place. They are so resentful of him that in conversations they never refer to Abbas by name, using instead defamatory nicknames.

“His 'no' policy will bring us down,” said one of Dahlan’s people who once worked for the Palestinian security forces in Gaza but fled when Hamas overthrew Fatah and took over the enclave in 2007. “We don’t agree with the alleged peace suggested by the unstable American president, either, but turning your back on the Gulf states that are willing to invest billions in easing the Palestinian crisis is an act of stupidity that could turn out to be a historic mistake. Abbas only cares about himself and his seat, not about the future,” he told Al-Monitor on condition of anonymity.

Another associate of Dahlan who returned to Gaza after being beaten up by PA security forces, told All-Monitor that anyone who takes the trouble to do so can find Dahlan’s fingerprints all over the Bahrain conference. The source said on condition of anonymity that few know about his years of behind-the-scenes activities in the wealthy Gulf states, the ties he formed, the projects he led in Gaza and the West Bank. Dahlan’s involvement in the reconciliation between Hamas and Egypt and the funds he raised for the West Bank and Gaza in the Gulf “paved the way for mobilizing these countries’ active participation in the economic conference in Bahrain,” he said. Like his colleague, this member of Dahlan’s inner circle said, “One can argue with the diplomatic plan of the White House, but never say no to big money, especially since most of it comes from rich Arab states that believe something good can be done with it for the future of the Palestinians before it is too late.”

Abbas, he added, “decided to plead and raise money from members of the Arab League in order to divert criticism by his people, but experience shows that Arab League members make pledges they cannot keep. Who will give him money — Egypt? Jordan? Or maybe Yemen?” he asked. “Do they even have money for themselves? How will they give any to Abbas? After all, a promise was made in Bahrain to establish an aid fund for these very countries with whom he pleaded for money to save the PA. So can one rely on them to save the PA from collapse?”

Tensions between top PA officials and the Dahlan associates they consider subversives threatening the PA’s security are nothing new but have grown in light of the severe economic downturn in the PA. Abbas loyalists think Dahlan and his group are taking advantage of the situation and stirring up trouble because they smell impending chaos in the PA and are preparing the ground for their leader’s return. Even as the crisis expands and PA staff are not being paid in full, Dahlan is offering them more emergency aid. Thus, his people are gaining power and the needy seek their help. A kind word about them whispered in Dahlan’s ear could perhaps help and perhaps guarantee survival in these tough times.

The PA’s economic decline also greatly worries the Israeli political and security echelons. Israel has reportedly offered PA representatives various “creative solutions” to break the logjam created by Abbas’ determined refusal to accept funds that Israel owes the PA as long as Israel deducts from them the equivalent of the stipends paid to the families of terror attackers and jailed Palestinians. Both Israelis and Palestinians are well aware of the implications of a PA collapse. In addition to a projected increase in terror attacks and the security repercussions, Israel will have to provide massive humanitarian aid for residents of the West Bank while a war of succession is waged.

It is no secret that among those contending for Abbas’ seat, Israel favors Dahlan. He would not make life easy for the Israelis, but Israel is familiar with his pluses and minuses. For Israel, someone who used to head the Gaza counterterrorism forces, fought Hamas and met with the heads of Israel’s security agencies will be better placed than others to rebuild the PA left behind by the elderly and embittered president.