Palestinian President Mahmoud Abbas managed to veto the participation of an official Israeli delegation at the upcoming Bahrain conference. 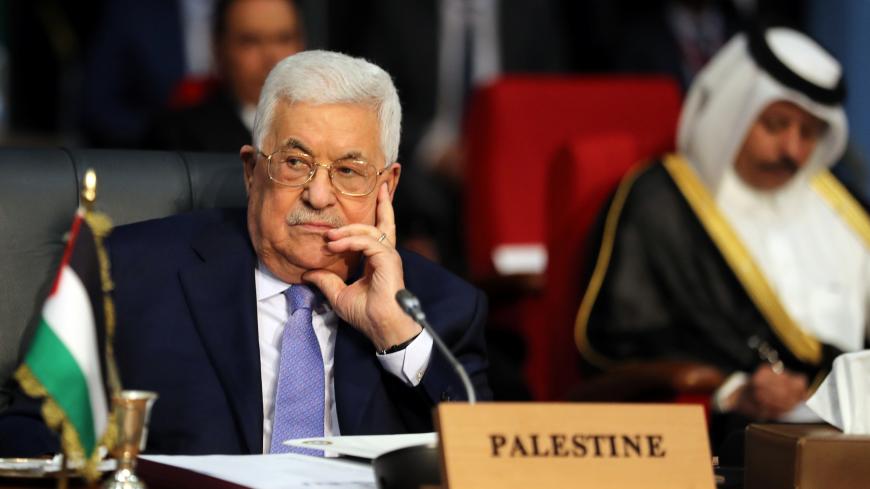 The economic conference set to open June 25 in Bahrain is supposed to deal with the economic ramifications of the Israeli-Palestinian conflict. The only problem is no Israeli or Palestinian representative will attend. The Palestinian Authority (PA) is angrily boycotting the event and, at the last minute, Israel was pushed outside. The dramatic, festive launching of the United States' “deal of the century” was downgraded at the last minute.

The nadir was reached when the White House announced June 17 Israel would not be formally represented at the conference; even the name of the conference was changed to the “Economic Workshop.” The reason for the change, according to official American sources, is because they want to focus on business and not inject politics. Unofficially, however, this is additional proof that while Donald Trump and his administration understand business, they remain neophytes when it comes to Middle East politics.

High-level Israeli sources confirmed to Al-Monitor that Palestinian President Mahmoud Abbas vetoed Israeli participation. Despite the fact that Abbas himself is boycotting the event, he succeeded in swaying several important Arab states to his point of view. These key states informed the American administration that if Israel will be officially represented in the conference, they will boycott it or sharply lower the ranks of their participants. The Americans are hoping for a double-digit number of Arab finance ministers at the conference. They didn’t want to end up with a handful of junior officials and thus endure public humiliation. At this stage, US envoys Jared Kushner and Jason Greenblatt had to make a decision: They decided to cut their losses and take Israel out of the picture. They opted to try and recoup American pride via ensuring a respectable and inclusive Arab representation in Bahrain.

Originally, Israel was supposed to be the central participant in the event, the jewel in the crown. That would have provided excellent photo-op opportunities for Prime Minister Benjamin Netanyahu, just in time for the September elections. Afterward, someone got cold feet and the invitations went out to all the capital cities in the Middle East — except for Jerusalem. In the next stage, there was talk of lowering the Israeli profile in general and the ranks of the participants in specific. On June 16, Israeli Foreign Minister Israel Katz still said Israel would be attending the conference, albeit at a lower rank. Two days later, it was made clear Israel would not officially participate at all.

Instead, several Israeli businessmen were invited to the conference, including Maj. Gen. (res.) Yoav Mordechai, who had held the position of Coordinator of Government Activities in the Territories until recently. Mordechai was, and still is, one of the most popular Israelis in the Arab world. He was invited together with his business partner, also a former official in the highest ranks of the Israeli security system. Mordechai is connected to the economic and political elites of the Gulf emirates and additional Arab states, all while retaining close, stable relationships with the higher-ups of the Israeli government in Jerusalem as well. The eyes in Manama, Bahrain, will be mainly fixed on him.

Another invited guest is professor and Brig. General (Res.) Yitshak Kreiss, now director general of the Sheba Medical Center at Tel HaShomer and a former Israel Defense Forces surgeon general. Another invited Israeli businessman is Shlomi Fogel, one of the owners of Israel Shipyards and a member of Netanyahu’s inner circle of friends. All in all, said our high-placed source, we are talking about a low double-digit number of Israeli businessmen who are not officially part of the government but are very connected to it.

“Now the Americans finally understand what we have known for generations,” said an Israeli businessman — who is also slated to attend the conference — to Al-Monitor on the condition of anonymity. He added, “The leaders of the Arab world live a double life. Behind closed doors they will tell you one thing, but outside those doors they will do something else entirely.”

In the discussions and encounters held by the American staff in Middle East capitals over the last two years, there was much optimism over the odds for success of the conference. “Almost all the Arab elites were enthusiastic and did not express any opposition to Israel’s participation in the event,” a senior Israeli figure said on the condition of anonymity. The source added, "But there’s a big gap between theoretical talk and reality on the ground.” Now the American administration also understands this reality. “There are clear boundaries Arab leaders still cannot cross,” a senior Israeli diplomatic figure told Al-Monitor on condition of anonymity. He added, “So long as there is no progress on the Israeli-Palestinian front, they can’t ignore public opinion in their countries, not to mention public pressure. They can’t be seen publicly with Israel at an official function, as if everything is fine.”

An Israeli Cabinet member told Al-Monitor under the condition of anonymity “the event would be both a success and failure for the Americans, simultaneously. The success lies in the fact the great majority of the Arab world will be represented at the conference, despite all of Abbas’ objections. The failure is the fact that they [the Americans] were unable to push Israel in through the front door and are forced to make do with ‘unofficial representatives.’” In other words, Israel’s status as the official mistress of the Sunni Arab states has not changed. At the moment, no one has the desire or ability to “come out of the closet” and openly demonstrate their secret relationship with Israel. Even the economic incentives and goodies dangled by the Americans did not succeed in creating enough energy to break through the glass ceiling.

One more thing: Even though the PA is bankrupt and Abbas is in the twilight of his rulership and has reached his lowest point of all time in terms of popularity on the Palestinian street, Israel’s exclusion from the conference proves the elderly Palestinian leader still enjoys a stable status in the region. His veto power is still firm, even vis-a-vis the powerful United States.

The official unfurling of the complete "deal of the century" keeps getting pushed off. At the moment, it is Nov. 6; thus, its fate remains unclear. “The Americans won’t [publicize their peace plan] until Israel will vote in its government. According to the present state of affairs, that may never happen,” a senior Israeli political figure told Al-Monitor on the condition of anonymity.

American strategy toward the PA has been to weaken the PA to the maximum, push Abbas into the threshold of insolvency and a historic dead end, and then wave a package of candies at them at the Bahrain conference — all of which has utterly failed at this point in time. The Americans still have not given up. On June 18, Greenblatt was interviewed by Israeli Channel 12 and asked if the American peace team is close to the point where it understands its efforts have failed, and will it give up trying to achieve an arrangement in the Middle East. Greenblatt denied they were close to this point and noted, “If we reach it, we’ll know.” While they may not have not reached that point yet, they are definitely approaching it.