The Tel Aviv municipality is trying to bring order to the chaos unleashed across the urban landscape by the electric scooter craze. 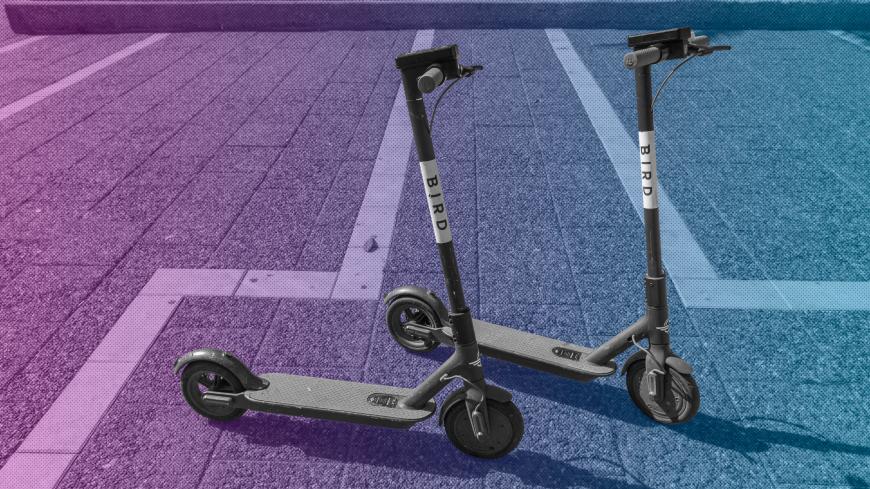 Bird is one of three companies that has inundated Tel Aviv with shared scooters, two of which are seen here on Kikar Rabin square, Tel Aviv, Feb. 8, 2019 - Michael Jacobs/Art in All of Us

Anyone who has been in Tel Aviv in the past year has encountered shared electric scooters laying on sidewalks, in the middle of pathways, in public parks and at entrances to apartment buildings. Three international companies — US-based Bird and Lime and the German company Wind — have dumped some 10,000 scooters on greater Tel Aviv.

After long months of total chaos, on June 17 the Tel Aviv municipality published regulations for shared scooter services. The new regs limit parking the vehicles to various parts of the city and designates marked parking areas. It also limits the number of vehicles and the areas of their distribution and increases the policing of riders on sidewalks, authorizing parking police to confiscate scooters whose riders violated the rules.

“Electric scooters are a kind of social utopia,” Ido Cohen, director of the start-up Loadmill, told Al-Monitor. “They address the very serious problem of mobility in cities and the problem of the ‘last mile.’ According to data from the rideshare company Lyft, most of their rides are less than a mile. The scooters solve this problem with less air pollution, noise and less traffic. It’s the reason that in the future they will seriously hurt the taxi industry, it seems.”

The shared scooters are enormously popular according to a study Cohen conducted analyzing data from the vehicles’ charging stations. Cohen’s found in 2018, all 330 operating scooters from Bird, the only company then operating in Tel Aviv, were being used at any given time. Over the course of several months, Cohen counted 1,715 daily trips on average.The data show a consistent pattern of useage, he said.

Cohen estimates that there's no turning back, that the scooters are here to stay. “The growth of these companies is insane,” he said. “All over the world, people rush to these initiatives.”

Data that Cohen collected from the scooter-sharing companies show that Tel Aviv is one of the most successful cities for them. “First, there’s one day during the week when there’s no public transportation,” he said. “From our studies, there’s a significant jump in use on Sabbaths and holidays. Second, the hot and humid climate in the city makes walking and bike riding hard. Third, Tel Aviv residents are tech-leaning and rush to adopt new technologies.”

Tel Aviv Deputy Mayor Meital Lehavi, who has taken the lead in regulating the scooters in the city, considers it unrealistic to proceed based on the thinking that one should always get “zero meters from your destination,” which is a possibility the scooters offer.

“Man is a walking animal — not riding, not flying, and not crawling,” she remarked to Al-Monitor. “We haven’t come to replace walking. In the beginning, we allowed spontaneous distribution of the vehicles, but we saw that this was leading to catastrophe. Now we’re looking into a pilot of docking areas, which would be about a hundred meters one from another.”

According to her, this move reflects a balance between the desire to integrate the scooters and a desire to protect all users of the streets. “If someone has to walk 50 meters, it’s not the end of the world,” she said. “We must protect our children, our elderly parents. On the other hand, Tel Aviv is heading toward a jam. We have so many residents, visitors and commuters to the city, and the city is in second place in Israel with respect to air pollution from transportation.”

The scooter’s greatest advantage — freedom from fixed docking stations — is exactly what makes it a questionable vehicle in its current form, Yoav Lerman, an expert in urban planning, told Al-Monitor.

“Any license to scatter scooters in the public space is a license to turn to the city into a junkyard,” Lerman said. “Tel Aviv is a crowded city with narrow sidewalks, some of which are less than a meter wide. In addition, this is a vehicle that if it’s not properly parked is very dangerous. If a scooter falls on a child who tries to lift it, it could result in a severe injury.”

Lerman emphasizes that the shared nature of the scooters makes users less sensitive in certain respects. “The moment the vehicle isn’t yours, you’re less concerned about where you leave it,” he explained. “You’re also less concerned with the question of whether it’s parked safely, whether it could fall, whether a biker or an elderly person might not see it and trip over it. The combination of non-ownership and the opportunity to spontaneously leave is fatal and dangerous in a crowded city like Tel Aviv.”

“The secret of the success of this initiative is that you can leave the scooter anywhere,” Cohen insisted, comparing the scooters to motor bikes. “If we create docking stations, it would kill the initiative. Motor bikes can be parked anywhere, and no one thinks of creating dedicated zones for them. The idea should be to increase enforcement and make sure users park the vehicles responsibly. There are technological solutions for this.”

The approach of localities to the scooters varies around the world.The State of New York prohibits them, but that is apparently being reexamined. San Francisco limits their number, and Paris is imposing limits on their use and parking. Other cities are engaged in lively debates about the vehicles, but it looks like the scooter won’t be stopped. The solution it offers residents of big cities in terms of price, availability and efficiency is something no other shared vehicle can match.