The growing trend of biking in Israel has also considerably increased the number of accidents with pedestrians on sidewalks. 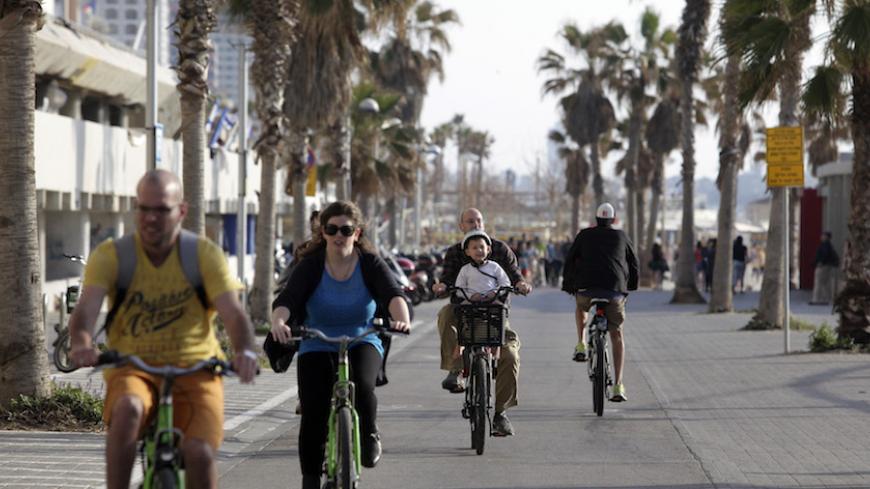 Insufferable traffic jams, growing awareness of healthy lifestyles and the new generation of chic bikes have contributed to the growing bicycle craze that has gripped Israel in the last few years. What once was a children's activity or a specialized sport now attracts a wide range of cyclists who are part of one of Israel’s biking clubs or professionals commuting to work.

In Tel Aviv, for instance, bikes are a particularly efficient means to beat the traffic and circumvent a shortage of parking. Across the country, amateur riders join groups that unite fellow bike lovers, who take part in early morning nature rides or evening city tours.

Electric bicycles are popular with the younger generation. But in the hands of these youngsters, the electric bikes become a hazard — not only do the youths drive dangerously and ignore the traffic rules, they also put themselves at risk by not wearing a helmet.

As bicycles have become a preferred means of transport for many, the Israel Bicycle Association was endorsed by 61 Knesset members and initiated in June a new Knesset bill. According to the bill, every local authority with more than 30,000 residents would have to submit a plan for constructing new bike paths and improving the ones that exist in its jurisdiction, and build bike racks near major buildings and train and bus stations. The bill was blocked in the Ministerial Committee for Legislation, but Yotam Avizohar, the association’s director, believes he can convince the minister of finance to remove his objection to the bill. Even so, Avizohar knows that the road is still long until the State of Israel becomes a bike-friendly country.

To illustrate the widespread use of bicycles, Avizohar talked to Al-Monitor about the data from the Central Bureau of Statistics that reflects the increase in nonmotorized bike imports to Israel. The data shows that between 2012 and 2015, there was a 25% spike in the number of bikes imported to Israel. In the last two years, the rate of imports grew even more.

“It took us six years to convince Israel Railways to allow bikes on trains, but there is a lot more work to be done on the topic — especially with the local authorities,” Avizohar said. “In many towns there is no comprehensive network of bike paths, even though it would be possible in terms of infrastructure and necessary from a safety standpoint. There is no timetable for getting this work done and the small funds provided by the Ministry of Transportation to build bike paths are not utilized.”

He added, “Instead, municipal inspectors are given the authority to enforce the law and prohibit riding on sidewalks.”

But some people are less than thrilled by the bicycle revolution. Take for instance Hagit Oriyan, who manages a Facebook page called “Returning Tel Aviv sidewalks to pedestrians.”

Oriyan publishes the stories of people who have been hit by regular and electric bikes. She told Al-Monitor, “If anyone thinks enforcement by municipal inspectors would solve the problem, he is dreaming. It will only reduce it. At the rate this disaster, this curse, is growing, they will not be able to manage the task.”

Oriyan cited data published on July 16 by Or Yarok (Green Light), according to which only 14% of riders use designated bike paths.

According to Dr. Oren Tavor, a senior physician at the Ichilov Hospital pediatric emergency department, in the last five years — since electric bikes came to Israel — the number of people injured in bike accidents has doubled. “From 629 injured in 2012 to 1,438 injured in 2016. That is 2.2 times higher. The jump was also seen in the number of children injured: from 89 in 2012 to 252 in 2016 — 2.8 times higher,” Tavor said. “In no other area is there a similar increase in injuries.”

In his conversation with Al-Monitor, Oriyan harshly attacked the government, local authorities and the police — and didn't stop there. “They abandon those on the sidewalks,” she said. “I demand licenses for electric bicycles. Aside from Avizohar, Knesset member Tamar Zandberg and Minister of Transportation Israel Katz, any sane person understands that electric bicycles are motorcycles in every sense. The Ministry of Transportation has rejected regulation of this vehicle, rejected raising the minimum age to ride it, rejected mandatory licensing and insurance. The police do not enforce the jungle in the streets and pedestrians are trampled under the wheels of bikes that are overtaking the city.”

According to Avner Ovadia, the spokesman for the Ministry of Transportation, the ministry has regulated all bicycles, including electric bikes, in ordinances approved by the Knesset and published in every media outlet. Ovadia told Al-Monitor that the Ministry of Transportation encourages bike riding as an alternative to personal automobiles to ease traffic on the roads. “Our ministry aids local authorities in planning and implementing bike paths in areas where such paths for bike riders can be paved,” Ovadia said.

He added that the Ministry of Transportation formulated in 2016 a trailblazing plan, at a cost of 250 million Israeli shekels ($70 million), to create a metropolitan network of bicycle freeways in the Dan region (Greater Tel Aviv), 150 kilometers (93 miles) in length. As for the claim of lack of enforcement, Ovadia said that the responsibility to enforce electric bicycles — like all vehicles, including two-wheelers — lies with the police.

“We are working to create workplaces that are friendly to riders,” Avizohar noted. “We are talking about bike racks and showers at workplaces. In the research study that we conducted, we found these are important components to encourage people to ride their bike to work. We argue that an employee who gets to work by bike is a better employee; he is healthier, friendlier, environmentally conscious and more energetic. I have no doubt that the benefit of riding bikes is greater than its potential detriments.”