A group of women has established the first cycling organization in northeastern Syria and held its first bike race in the city of Amuda, all part of an effort to encourage women to ride bicycles and promote green transportation. 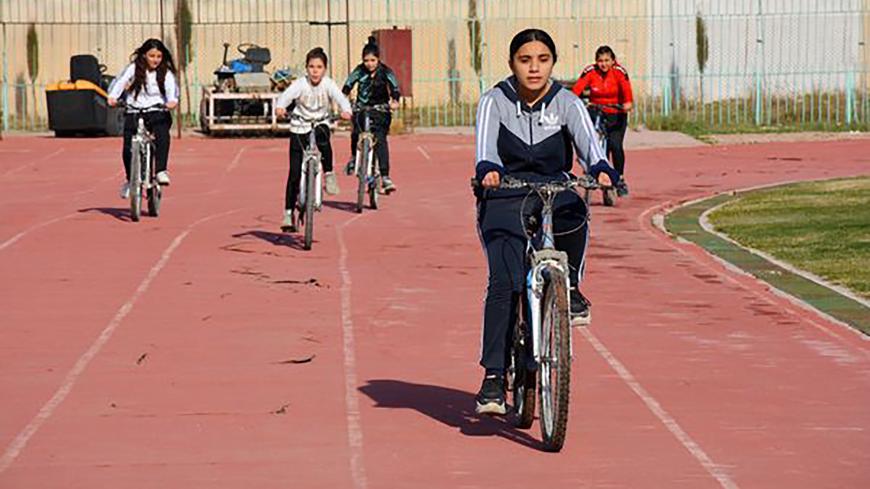 Women ride bikes as part of the “I Want a Bike” initiative in the northeastern Syrian town of Amuda in this undated photo. - Midia Ghanem/Al-Monitor

A group of female journalists and activists in the city of Qamishli, in northeastern Syria, are behind an initiative called “I Want a Bike” that strives to overcome traditions and taboos that prohibit women from riding bicycles and motorcycles as well as encourage reliance on bicycles and reduce pollution.

I Want a Bike has received broad acclaim among local women.

Midia Ghanem, a 28-year-old reporter for a local newspaper called Ronahi, first thought of the idea. In cooperation with the Sports Federation affiliated with the Autonomous Administration of North and East Syria, she put on the first women's cycling race on Jan. 16, the first such race in the area.

Ghanem told Al-Monitor that about 30 participants competed in in the town of Amuda, west of Qamishli. She said, “It took a lot of time and effort to prepare for the competition and I trained the competitors for two months.”

Ghanem noted, “Since our team succeeded, we are planning to hold competitions in different cities and towns in northeastern Syria, with the participation of women from Kobani, Derek, Manbij, Raqqa, Deir ez-Zor and other places. We seek to turn our competition into a wider annual event to reach all of northeastern Syria, with the participation of the largest number of women possible.”

She explained that the three-kilometer race started at the Darbasiyah roundabout and ended at downtown Amuda's Free Woman Square. The top three finishers won training bicycles provided by the Sports Federation.

Ghanem said, “I have been riding a bike since childhood and never stopped. All my friends can testify that I am a skilled bike rider. One of my friends asked me once to teach her to ride a bike, so I taught her within five hours. When I saw how happy she was to be able to ride a bike, I got the idea for the I Want a Bike campaign.”

She said that about two months ago, “I presented the idea to my colleague, journalist Shinda Akram, who works as a TV host at a local channel. She was interested and just a few days later we had formed a cycling team of 15 young women. Every day we have new women joining the team, which includes 50 women today, and we welcome others to join whenever.”

Speaking about the difficulties she faced, Ghanem noted that she has been harassed for riding a bike to work, but she didn't let it stop her thanks to the support of friends and co-workers. “I get my daily exercise by riding my bike to work, not to mention that using bikes reduces car exhaust that causes respiratory diseases, and it is an easy, clean and economical means of transportation.”

Akram told Al-Monitor, “Our campaign calls for encouraging women's cycling and even motorbike riding in public streets, and for breaking the barrier of fear for some girls who are too shy to ride bikes.”

Akram said, “Riding a bike needs appropriate clothing, and it is preferable to wear sporty clothes for comfort and protection,” adding that women unfortunately also have to consider their clothing while riding bicycles so that they are not targets of harassment and bullying.

Aladdin told Al-Monitor that participating was a dream come true. She pointed out that bike riding saves commuters time by helping them escape traffic, and it also reduces air pollution.

Local cardiologist Luay Hassan told Al-Monitor that cycling has both physical and psychological health benefits for women, noting, “Women cycling daily, whether for pleasure or as a means of transportation, helps fight obesity, promotes cardiovascular health and reduces anxiety and depression. It also maintains health and strengthens the bones, as well as helping to burn a lot of calories and generally improves the level of fitness.”