Turkish activists put heels on wheels to encourage women to ride bicycles for transportation, health, empowerment and a cleaner environment. 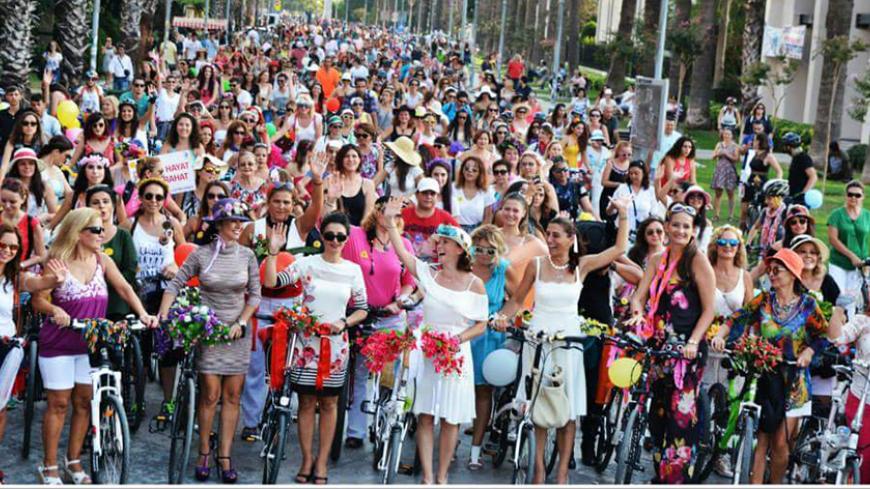 The Chic Women’s Bicycle Tour kicked off Sept. 20 in 10 Turkish cities. The call for participants, made through various social media outlets, stated, “This women’s activity is organized by women for women.” The cycling activists calling themselves Suslu Kadinlar (Chic Women) described the event as “independent, commercial free, without politicians and free for all.” They invited everyone to join. The bicycle tour was held for the third time in conjunction with the annual Car Free Cities Day, an initiative organized as part of the European Union’s “Mobility Week” activities. The Chic Women’s tour attracted the most attention from the public, and photos from the event help explain why.

One of the requirements for participation was to dress up, wear makeup and decorate your bike. It is the rare protest where participants take breaks to freshen their makeup. The riders' high heels, colorful dresses, quirky hats and flowery headbands made for great photo ops of beautiful women on wheels. Going against the trend of wearing sporty biking gear, these women dressed to attract maximum attention.

Al-Monitor interviewed Sema Gur and Pinar Pinzuti, the tour organizers. The cycling event is Gur’s brainchild. The high school teacher only learned to ride a bike three years ago, at the age of 38. Gur told Al-Monitor, “We organized the first tour in Izmir in 2013. We called on women to join all dressed up, because I thought of the event as a celebration, like a carnival. My goal was to enjoy a solidarity ride among women of all ages and all levels of cycling ability to gain confidence riding in the city streets. In a male-dominated environment, we are mostly told when to ride, what to wear when we are riding. I wanted to challenge these stereotypes so that women view the bicycle as a viable transportation option, not just for recreation. I wanted to tell women, ‘Just come. We are not traveling long distances. We are not competing. You can dress as you please and share this experience.’”

Al-Monitor asked whether it was a women-only event. Pinzuti, a cycling activist and the group's blogger, said, “We organized this event for women, so I can say this is a women-mostly event, as we welcome men who agree to abide by our rules.” The rules for men state, “Dress fancy. Do not intimidate beginner-level female cyclists if you are an expert. Please do not try to dominate the event.” Such women-mostly or women-only events are designed to generate a welcoming and noncompetitive space for women’s empowerment.

The Chic Women's bicycle club helps women year round. They advise them on how to purchase or rent a bike and how to maintain it, and they offer support on finding the courage to get out and about with your bike. Encouragement is a crucial factor given that only 3% of adults in Turkey use bikes as a form of transportation, and only 0.06% of adult women ride bikes to go shopping or to work.

The various groups forming support networks for women to cycle highlight the importance of biking for one's health as well as leading to a simpler lifestyle and cleaner environment. For example, in Istanbul, a city of approximately 20 million people, more than 1,000 new vehicles are added to traffic each day. It is therefore imperative to find alternative means of transportation. Bikers in all of Turkey's major cities lament the lack of bike lanes and abundance of aggressive drivers. For female cyclists, harassment is also a major issue.

As a method of protest, the Chic Women’s Bicycle Tour can be classified as a creative and peaceful one. Gur said, “We did not face any opposition from the police, but rather support. The first year, it was a small organization, and the police saw us, but they did not block the event. In 2014, I sought permission from the authorities as the number of participants increased, and I feared for their security. The police did not allow us to ride on the main street [Konak Meydani] in Izmir, so ironically, on the car-free day, we could not take over the streets with our bikes. This year, we received support from the city municipality, and the police rode on bikes alongside for our protection.” Pinzuti added, “This year, we started organizing early, and it was effective in reaching higher numbers of women and also expanding the movement to different cities.”

Both Gur and Pinzuti are soft-spoken, hardworking career women who took up cycling as a hobby but soon recognized the potential bikes offered in liberating women. “We have participants from all walks of life. We are not associated with any political party or movement,” Gur added. “We are not just a group of fancy women with lipstick, but women with attitude. We show that you can protest with a smile, waving at the people. It doesn't all have to be bitter. In an environment where women are told not to laugh in public, not to go out in public while pregnant, our initiative is a courageous move.”

Indeed, the movement has rattled the windows of groups with certain moral outlooks. Cycling in public is a contested issue in Islam. In 2007, an “Islamic bicycle” became the focus of intense debate in Turkey. Although there are no legal restrictions against women cycling in Turkey, unlike in Saudi Arabia and other countries governed by Islamic law (Sharia), some Turkish Islamists find women on wheels unacceptable. An imam from Ankara speaking on condition of anonymity told Al-Monitor, “Women should not ride bicycles or motorcycles in public, but they can do it in their own backyards. It has to be a bike designed for women, for hygienic purposes. It is not appropriate for them to ride for a long time, because it is sexually stimulating for women to cycle. So, I would not allow my wife or daughters to get on a bicycle.”

In raising awareness about the impact of cars in Turkey's crowded cities, women all around the country are finding creative methods of protest. On World Car Free Day, Sept. 22, Buket Atli, a young environmentalist, held a picnic in a parking lot. Atli said, “It was a spontaneous event. We have a group discussing issues about the environment and the reckless urbanization projects. I made an announcement about this idea and carried it off. The police did not oppose our picnic. If the event is spontaneous, they are understanding. That said, it is not easy to gauge the reaction of the police. For example, I witnessed one guy who was giving free hugs in the heart of Istanbul get fined on charges of creating a public disturbance. Ours was a limited act, and the people in the neighborhood understood and supported it.”

Women in Turkey from different socioeconomic backgrounds are working hard to raise awareness on a variety of issues. In causes related to peace, women’s rights and the environment, they are playing prominent roles through creative and nonviolent means of protest. Maybe there is a good lesson to be learned from women putting heels on wheels and throwing lipstick and eyeliner in their baskets.