Cyclists get a bumpy ride in Beirut

Cyclists are becoming a more common sight on Beirut's treacherous roads, despite a lack of safety infrastructure. 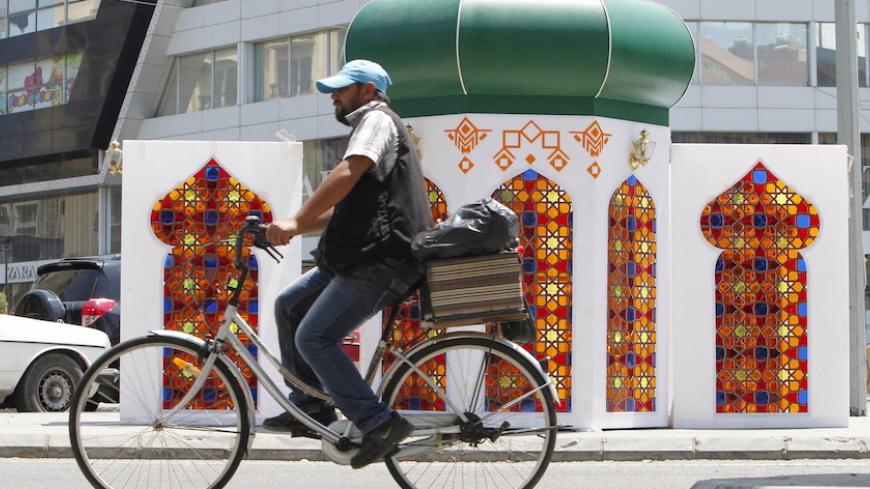 A man rides a bicycle near decorations erected ahead of the holy fasting month of Ramadan at the port city of Sidon, southern Lebanon, June 16, 2015. - REUTERS/Ali Hashisho

Beirut could be considered one of the world's least bike-friendly cities due to its air pollution and traffic jams. But more and more residents are riding bikes during the day — and night.

Every Thursday night, cyclists wearing helmets and reflective yellow cuffs for visibility cruise bravely on the main roads with Cycling Circle, a company that specializes in cycling projects in Lebanon. Karim Sokhn founded the company in 2012 to share his passion for cycling with others. Since then, he has organized rides in Beirut and biking trips to villages and historical sites around Lebanon.

“I used to bike between my house and the university every day, and everyone looked at me strangely,” Sokhn told Al-Monitor. “Biking was either for the very rich or the very poor. The very rich who could afford expensive bikes used them for exercise, and the very poor who couldn’t afford any other way of transportation used bikes out of necessity.”

Sokhn pointed out that everyone used to bike before the Lebanese Civil War (1975-1990), but the war destroyed the country's infrastructure and also changed how people lived. “It is now a challenge to get people to bike as a way of life,” he said.

He started the night rides with his friends, and more and more people who heard about the rides through word of mouth joined them. This eventually led to his starting Cycling Circle.

“My goal is to promote biking as a way of transportation and create a safe and secure environment for people to have the best experience, with guides, insurance and security measures taken during the rides we organize,” Sokhn told Al-Monitor. “I also want to develop bicycle tourism in Lebanon.”

He added, “I even started a delivery service on bikes — called ‘Deghri Messengers’ — after watching the movie 'Premium Rush' about a delivery service in New York. We stopped this year, but at least it made us known and gave a positive image of the bike in Beirut.”

Sokhn opened a boutique and community space last year in Badaro, a popular Beirut neighborhood. He developed new bike tours, gave biking lessons to all skill levels, held technical workshops to teach bikers how to repair their bikes and started sales of secondhand bikes. “It’s a very slow process, but we see more and people interested in bicycling,” he said.

“There are quite a few people who bike to work every day,” Sokhn told Al-Monitor. “Also, the fact that a lot of foreigners living in Beirut ride a bike encourages Lebanese to think they can do it as well.”

The growing trend of cyclists in the city prompted the municipality of Beirut to implement its first bike-sharing system downtown in January 2017. The initiative wasn’t successful, as the new bicycle lanes were quickly overrun by motorcycles and parked cars.

“The initiative was good marketing because it made people think about biking. However, it was a disaster on a practical level,” Sokhn said. “It is not enough to make a few lanes and give people bikes to share. We need a law to regulate this activity and to protect the bikers. We need to have an awareness campaign to educate people.”

Organizations such as the Chain Effect and Moonlight Cycling organize cycling events and raise awareness about road security. An online platform called Lebanon Bicycle, run by the nongovernmental organization Logos Association, gathers information on social biking events where cyclists can meet each other.

Georges Tachdjian, president of Logos and administrator of Lebanon Bicycle’s page, told Al-Monitor that people from all over Lebanon can use the website to "connect with each other and discover the city through [biking] social activities.”

He said, “We aim to promote bicycle usage instead of cars. We also aim to create a team of professionals who can participate in championships around the world. We’ll start by developing a regional network to organize competitions, starting in 2018. But our biggest hope is to get safe spaces and lanes in parks or in parts of the city where children will be able to bike for fun safely.”

For those who want to start biking in Beirut, graphic designer Siwar Kraytem offers some tips — from what to wear to how to bike on crowded roads — in her guidebook, “ABCycling in Beirut.” The upbeat and humorous guide also takes up women’s issues, such as whether it is possible to wear a skirt on a bike, cycle during your period or what to do when you get lewd comments while biking.

“I started riding a bike out of necessity during my second year of school and grew to like it,” Kraytem told Al-Monitor. “I do not understand why biking is so undervalued as a means of transport. A lot of people started asking me questions about how I do it, if it’s dangerous, what I hear from car drivers, so I eventually thought of a guide to sum up all the questions a starter would have, in a fun and interactive way.”

She hopes the book will get more people biking. Her advice is simple: “You have to be confident while riding and maintain a steady hand.” This is a useful tip to keep in mind while biking the jungle of Lebanese roads.