The war did not stop local activists in Damascus from organizing a public bike ride aimed at raising awareness about the benefits of cycling as an alternative means of transportation. 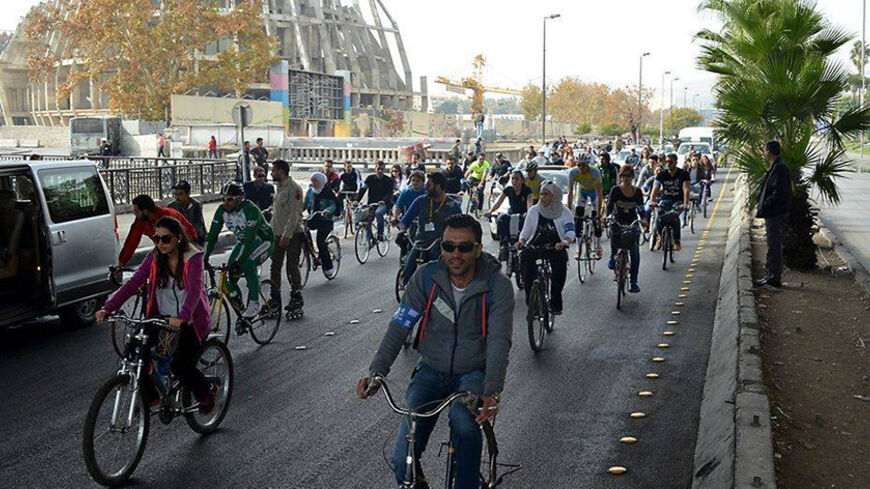 DAMASCUS, Syria — Defying the war around it, locals in Damascus took part in a city bicycle convoy Nov. 21 to promote the use of bikes to bypass traffic woes exacerbated by dozens of military and security checkpoints. The “Yalla Let’s Bike” initiative organized the ride under the slogan “A bicycle on the road keeps the traffic away,” with 900 Syrians of different ages and social classes taking part.

The convoy's route — which was coordinated by the event’s organizers, the Damascus governorate and traffic police — took off from the Dar al-Baath garden on the Mezzeh highway in central Damascus. It was an ambitious place to start, given that earlier this month a suicide bomber had hit a tunnel on the highway, killing two and wounding eight.

At 10 a.m., the bikers moved toward Umayyad Square to reach Marjeh Square, which has also had its share of suicide bombings and mortar attacks during the more than three-year war. Then, they returned to their starting point. Engineers, professors, youths and children took part in the convoy in an attempt to promote the concept that bicycles are better than cars amid the suffocating traffic in Damascus resulting from so many checkpoints.

One of the organizers, Sara al-Zein, told Al-Monitor, “We are in need, now more than ever, for the culture of bicycles to spread. The selfish desire of people to take public transportation despite the crisis of transportation and traffic makes bicycles a comfortable choice.”

She said, “We want to break the norms and social snobbery, according to which bicycles are for the poor or male athletes. This is why we asked every participant to wear their office clothes, to encourage other people to ride bikes as a transportation means that does not bring them shame.”

Tamam Dabbas, an engineer and a participant, told Al-Monitor, “I participated in this convoy with my son and daughter. I wore my office clothes to encourage my colleagues at work to ride bicycles as a way of transportation.”

“I have been riding my bike for a year now. I no longer have to be stopped at checkpoints and be late for work. Also, it is a healthy practice. I work out every day and it is more economical than cars, especially after the skyrocketing increase of oil prices,” he said.

At noon, the convoy reached its final destination at Umayyad Square, where bikers gathered for entertainment, such as naming the most beautiful couple, the youngest participant and the smallest bicycle. 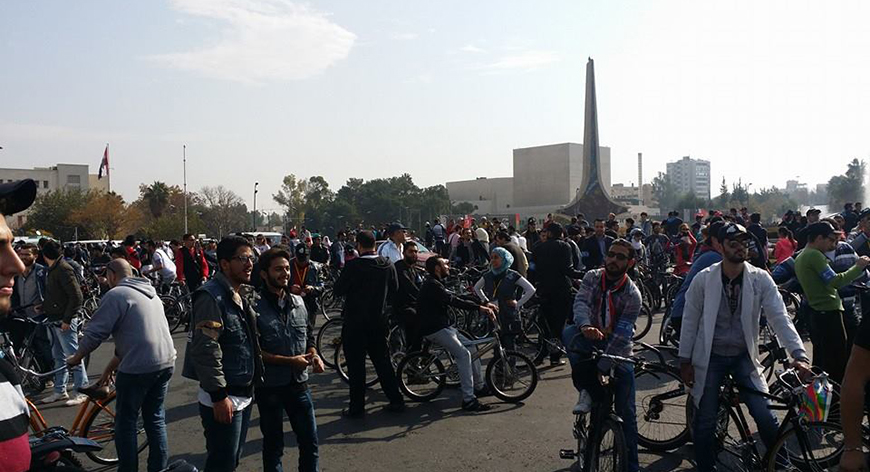 Yalla Let’s Bike was begun in Syria in April 2014, with the contribution of 50 volunteers. The founder of the initiative, Maan al-Hemma, and some members began to use bicycles as a means of transportation. Shortly after, the idea spread to university students, who were the most affected by traffic. The idea then spread to different social and age groups.

“The initiative faced some obstacles when it was first launched, the most difficult one being the confiscation of many bicycles. This is why we asked everyone to get a license in coordination with the Damascus governorate, so they are able ride their bikes on the streets without any fear,” Hemma told Al-Monitor.

“We opened an office for license requests, which we send to the municipality council. Indeed, 1,500 bicycles were granted licenses,” he said.

In July 2014, the initiative’s organizers suggested that bicycles be allowed inside the campus of Damascus University to facilitate the movement of students. This was done in coordination with the university administration. Around 150 bicycles were allowed in and places were reserved for them, but the innovation was short-lived.

Zein said, “Shortly after bicycles were allowed in, the administration ordered them out under the pretext that it could not ensure the safety of students, especially after a girl fell while she was riding her bicycle on campus.”

Yalla Let’s Bike organized other activities, including the initiative “Where can we find a bicycle?” begun in August 2014, assembling a guide to shops that repair bicycles. Another initiative was organized in September 2014 under the name “Let’s Bike to Shaalan,” during which 50 participants rode their bikes in the Shaalan neighborhood in downtown Damascus.

The organizers also published a safety manual and began another initiative titled “Yalla Girls Let’s Bike,” to encourage women to ride bikes and break barriers imposed by the traditions of Middle Eastern society. In coordination with the Damascus governorate, bicycle lanes were created on some highways in the city, including the Mezzeh highway, which links Umayyad Square to Marjeh Square. In the future, it is hoped that special bicycle lanes will be made available on all the streets of Damascus and other cities.

Away from the noise of the war and the sounds of rockets, the organizers of Yalla Let’s Bike meet every week to discuss new ideas to promote cycling among citizens. They hope to make Damascus an environmentally friendly city by focusing on the importance of bike riding as a fun, less costly, healthier and eco-friendly way of transportation.