Amid the increase in fuel prices in the world, which is also reflected in the UAE, transportation costs increased as well as the prices of small cars. The solution for residents with limited income is to resort to electric scooters. 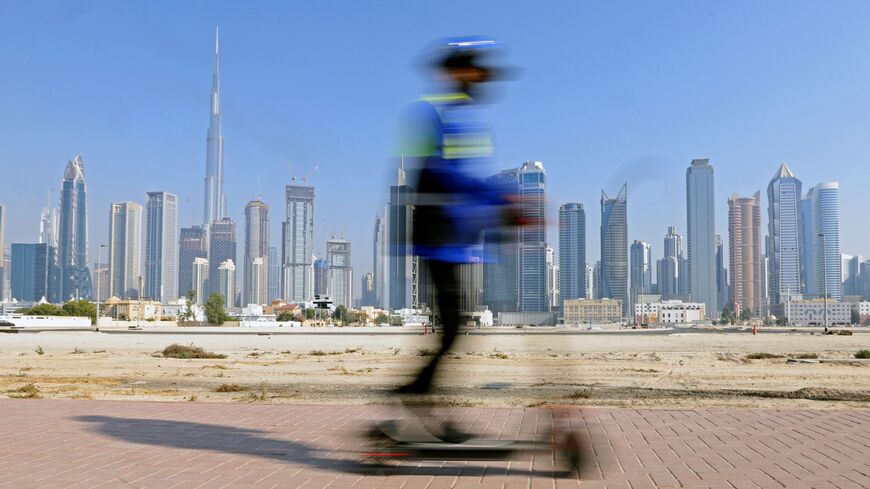 A man rides his electric scooter in Dubai backdropped by the Gulf emirate's highrise buildings on February 16, 2021. - KARIM SAHIB/AFP via Getty Images

The demand for driving permits to use electric scooters has significantly increased in recent months in Dubai, which is home to nearly 3.5 million people (according to 2019 Emirati government estimates).

The increasing demand for e-scooters comes in light of the rise in global fuel prices in the wake of the Russian-Ukrainian war. Public transportation in the United Arab Emirates has been particularly affected, putting a strain on low-income residents who rely on it to get to work.

Nearly 89% of UAE residents are expatriate workers, with the majority of these (59.4%) coming from South Asia, in addition to many Egyptians (10.2%) and Filipinos (6.1%). These workers, who are often employed in low-wage jobs, have increasingly resorted to scooters as a cheap transportation option.

The prices of used small cars and new cars with four-cylinder engines have also increased by about 40% due to high demand in light of the fuel prices.

The increase in fuel prices has also driven up the cost of taxi rides and ride-sharing services.

Many residents found themselves unable to afford cars let alone cab rides on a daily basis. Most workers and employees of Asian and Arab nationalities in the Dubai emirate live in remote areas or in their work areas where public bus service is not available. E-scooters are a handy solution for them to commute to work while avoiding Dubai’s traffic jams and saving time.

Abu Bakr Mohamad, an official in the Roads and Transport Authority (RTA), told Al-Monitor, “The RTA issued 38,102 permits for e-scooters during the first three months into the launch of its digital platform that was announced in June. An average of 423 permits are issued by the RTA per day, and they are issued free of charge.”

Asked about the conditions that applicants need to meet to be able to get an e-scooter permit, Mohamad said, “To get the permit, one should not be aged below 16 and should pass the training course on the RTA website. The training course includes lessons about scooter technical specifications and standards and the areas where scooters are allowed to be used. The course also offers lessons about scooter traffic signs.”

There are specific areas and streets where e-scooter permits are needed, but permits are not mandatory in bicycle lanes or on sidewalks specified by the RTA. When one holds a valid driver’s license or international driving license, they don’t need a permit either.

The Dubai government is working to make the emirate more bike friendly, and the RTA is encouraging residents and visitors to use e-scooters as an alternative means of transportation. According to the digital platform, 11,206 (equivalent to 29%) of permit holders are tourists and visitors.

Amjad Abdel Qader, a Syrian citizen who has been residing in Dubai for 12 years, told Al-Monitor, “More than three months ago, I decided to get rid of my car, as it used to cost me a minimum of 40 dirhams ($10.90) a day, not to mention the parking fees as one can never find free parking in Dubai or any other emirate. If I go to work five days a week, I would have to pay at least 60 dirhams per week ($16). Then there is the cost of [traffic] tickets, which are issued in Dubai for the silliest reason.”

He added that he works next to his house “so I don't really need a car. I drive the scooter and get to work in no more than 15 minutes. When I finish work, I do not have to worry about traffic or look for a place to park my car at the supermarket, for example.”

Nesreen al-Hamdi, an Egyptian, told Al-Monitor that she has been living in Dubai for five years and works for an insurance company in Al Barsha.

She had taken out a car loan to buy a car, but her work stopped for a while due to the pandemic so she had to return the car. When she decided to buy a second-hand car at the beginning of the year, the Russian-Ukrainian war broke out and prices rose, so she had no choice but to ride a scooter.

Her Indian and Filipino colleagues encouraged her to buy one because it would make her life easier, so she did. She has been driving an e-scooter since May for nearby transportation and taking the metro, tram or bus to farther destinations.