More women in Lebanon are using motorcycles to move around the city as fuel prices are soaring amid the devastating economic crisis. 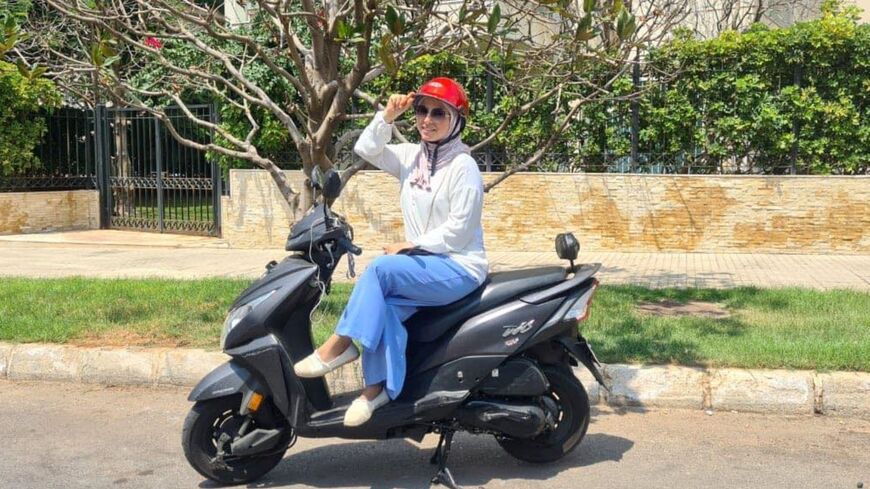 Rana Karazi sits on her motorcycle in Beirut, Lebanon. Karazi makes a living offering rides to women around the city. - Photo from Rana Karazi's Facebook page

BEIRUT — Soaring fuel prices in Lebanon have pushed citizens to find more affordable alternatives to their vehicles. The sight of women on motorcycles has become more common, since motorcycles are more fuel-efficient than cars.

Aya Awad, 20, a university student who lives in Tarik el-Jedideh in the capital Beirut, told Al-Monitor, “I bought a motorcycle about three years ago, just when the economic crisis began. It is cheaper and faster than a car during congested rush hours.”

She added, “This decision changed my life. It is a convenient and affordable means of transportation. I go everywhere with my motorcycle, to university, out with friends, or shopping.”

Since 2021, fuel prices have risen gradually as the government began lifting subsidies, while purchasing power shrank. This coincided with an increase in the taxi and public transportation fare. Combined with the lack of a modern public transportation system in Lebanon, more women are using motorcycles, ignoring customs and traditions and gender discrimination.

Sarah Ghandour, 33, an employee in the Ministry of Information, told Al-Monitor, “I have been driving a motorcycle since 2018. It first started as a hobby, before the rise in fuel prices. I would use my motorcycle for going out to the mountains and the beach on holidays. But I also used my car to go to work and other places.”

But now the motorcycle is a necessity, she said, because it is cheaper and "helps me avoid traffic congestion on the roads and find an easy parking spot.”

Ghandour has not faced difficulties or been bullied. “In the southern suburbs of Beirut, where I live, it is rare to see a woman driving a motorcycle," she said. "We often see women behind a man on a motorcycle. But when the crisis started, the number of women who bought their own motorcycles increased, most of them veiled.”

“I never thought it would be possible for me to drive a motorcycle," said Nancy Yammout, 43, who bought one two months ago. Her family worries about traffic accidents and Lebanon's dilapidated infrastructure,” she told Al-Monitor, but “One ride with a friend, a member of the Hawks-MC motorcycle club, changed my life. I saw many women driving very big motorcycles. When I saw a woman in her 50s leading a team of male motorcyclists, I was encouraged more to start driving my motorcycle everywhere.”

Yammout explained that motorcycles need less fuel, and "I enjoy driving my motorcycle during all seasons. I chose mine big and loud, because they are safer and other drivers can notice it. I learned at the academy how to drive safely.”

Some women are even making a living with their motorcycles. Rana Karazi, a 40-year-old mother of two, told Al-Monitor, “I have been driving a motorcycle since 2015, but I started my project ‘moto taxi’ after the Oct. 17 revolution, when I lost my job at an insurance company in Beirut.”

Karazi currently lives in the Cola area in ​​Beirut and drives many women and girls to their workplaces and universities. “I get around 60 and 70 moto-taxi calls daily,” she said.

Karazi started offering these services by chance, when a friend asked her to drive her son home for a fee. “Because I am a veiled woman, women tend to trust me more. I posted an advertisement online and it got me a lot of buzz.”

Making a living from her motorcycle “has changed my life," she said. "Driving a motorcycle as a taxi gave me more self-confidence, and improved my financial situation.”

Karazi currently charges a fare of 50,000 Lebanese pounds (around $1.50 at the black market rate) inside Beirut, half of what a car would charge.