Modern Gulf cities built around car dependency face a net-zero pledges test. Plans to retrofit cities and weave in sustainable mobility are in the pipeline, but the car is still king. 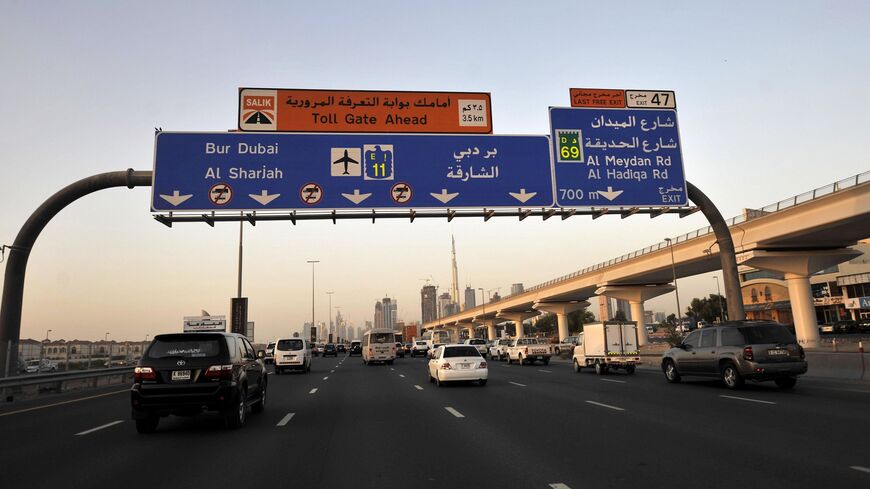 A picture taken on June 1, 2009 shows the traffic on a highway in Dubai, the most populous city of the United Arab Emirates. - OLIVER LANG/AFP via Getty Images

The Gulf Arab states’ first oil exports in the mid-20th century triggered migration to cities. Neighborhoods built around individual car-based mobility were built, primarily inspired by the United States’ 1950s suburban dream. “Cities in the Gulf were designed on low-density planning, and that does not make public transportation financially feasible because ridership is very low, just like in many American cities,” noted Karim Elgendy, an urban sustainability consultant and founder of Carboun, an initiative promoting sustainability in cities of the Middle East and North Africa. He said population density in major Gulf urban centers is “very low.” In Saudi Arabia’s capital, Riyadh, the rate is three times lower than what UN-Habitat recommended for sustainable neighborhood planning — at least 15,000 people per square kilometer. Worse, density is declining. Mecca's halved between 1983 and 2010.

Oil discoveries “undermined, with unparalleled suddenness, the roots of an ecosystem which reflected a perfect adaptation to an environment many generations old,” Mohamed Riad, then professor of geography at Qatar University, wrote in a 1981 research paper on petro-urbanism.

Decades later, the car culture’s pitfalls, including impacts on public health, are coming back to haunt Gulf states, now some of the world's most urbanized countries. Kuwait has the world’s highest rates of childhood asthma linked to traffic pollution, followed by the UAE.

The climate crisis tops the international agenda and nudges policymakers to explore alternatives. Elgendy told Al-Monitor he was consulted by the government of Dubai a few weeks ago. “There was great interest in improving and redefining mobility,” he said, before the UAE, of which Dubai is one of the seven sheikhdoms, hosts the COP28 climate conference in 2023.

The Dubai 2040 Urban Master Plan emphasizes quality of life to help attract talent as a hub for the global economy. UAE’s government portal says the plan aims to “encourage mass transit use, walking, cycling and flexible means of transportation."

“The approach evolved with the realization that the question of climate change could no longer be avoided,” said Camille Ammoun, a policy advisor in sustainable urban development to Dubai from 2007 to 2018.

Dubai successfully weaved into the city the Gulf’s first metro network in 2009 (Doha followed suit in 2019), primarily along the main artery of the city, the Sheikh Zayed Road. Dubai’s Roads and Transport Authority estimated that the metro eliminated about one billion car journeys from 2009 to 2020. Throughout 2021, Dubai Metro carried 151 million riders.

Besides expanding metro networks, analysts interviewed for this report called for higher population density around transportation nodes. In Doha, the regeneration of the downtown Musheireb district has translated into higher density around Doha Metro's central station hub.

There are disparities, though. “I do not think there is much interest in public transportation at the moment in Kuwait, and there is very little action on the ground. Oman likewise,” Elgendy said.

Kuwait's last major transportation plan was in 1978. “I remember an elder from a very affluent background telling me that he used to go to the market with his grandmother by bus,” said Jassim Al-Awadhi, founder of Kuwait Commute, an initiative established in 2018 to raise awareness about public transport. But since 1980, bus ridership in the emirate dropped by 86% to only 2.2% of the total population boarding a bus daily.

As ridership plunged, bus operators focused on fewer routes, mainly to high-density areas where low-income workers live, strengthening a perception among Kuwaiti citizens who account for only about 30% of the population that bus networks only cater to blue-collar workers.

In the meantime, the number of cars in Kuwait jumped by 65% between 2006 and 2016. “Automobiles have taken control of our lives," Al-Awadhi told Al-Monitor. The long-discussed Kuwait Metro, still in draft form, is “like a dark joke because nothing happens on the ground.”

Also, the Gulf’s hot and humid climate — temperatures climb above 50°C (122°F) during summer — discourages walking or cycling for half of the year, including for first-mile-last-mile distances. Cities like Montreal and Hong Kong prove that extreme climates are not a deterrent to public transportation, but it requires protective infrastructure to provide comfortable conditions.

Urban planning analysts believe the solution in the Gulf lies in air-conditioned multimodal transportation nodes where passengers can switch from a metro train to bus, tram or even micro-mobility.

“Over the last couple of years, e-scooters have emerged as a popular mobility solution to tackle the first-mile-last-mile issue, especially in Dubai,” said Syed Munawer, a senior urban planning specialist at Qatar National Master Plan.

He told Al-Monitor that setting up dedicated walkways and lanes for scooters would increase public transportation adoption and offer a cost-effective door-to-door alternative to individual cars.

Autonomous electric vehicles are also viewed as a solution to tackle first-mile-last-mile issues — Dubai plans to roll out the Gulf’s first driverless taxis in 2023 — but air transport is met with skepticism. “There is always a fascination with new things, such as air mobility, but I do not see their advantage from a sustainability point of view. Air transportation is very demanding in terms of energy use," Elgendy said.

Building new cities and transportation modes from scratch could be a solution, Saudi Crown Prince Mohammed bin Salman believes. The Line, a linear futuristic town planned along a 170-km strip of land, is billed as a series of neighborhoods without any roads, streets or cars, connected by an ultra-high speed transit network.

“In my opinion, the main question is do we invest in urban mobility as a publicity stunt, or to genuinely reinvent the way we move around Gulf modern cities,” a source within Gulf urban planning circles told Al-Monitor. “There is a staggering mismatch between ambitions and actual policy frameworks.”

Another problem is that the interests of several influential family-owned business conglomerates, such as car importers and construction companies, remain closely tied up with car-based mobility.

Putting the genie of car culture​​ back into the bottle also implies rethinking the consumer culture. “Cars are attractive articles of consumption; that is something people aspire to,” Elgendy said. Ammoun noted, “The individual car is still king ... Dubai was built for cars even more than some American cities, such as Los Angeles,”

Elgendy concluded: “It is incredibly hard to retrofit cities. It requires huge investments.”

Removing cars from the equation has never been considered, Munawer said. EV manufacturing plants are in the pipeline in Saudi Arabia to make 300,000 cars a year by 2030, half of those built by Public Investment Fund-majority owned EV startup Lucid.

So far, the electrification push does not extend to fleets of gasoline-powered buses that shuttle armies of migrant workers from their labor camps on the outskirts into Gulf cities every day. The segregated clusters also shed light on the Gulf’s long-favored planning strategy of housing in one area, shops in another, etc.

“I shiver when I see some of the planning regulations still in practice here that exclude retail or mixed use in residential areas,” the urban planning source said. “To develop sustainable mobility we should provide mixed use communities that offer live-work-play options.” The source added: “We have to change the way we plan Gulf cities.”