Is Qatari money to Gaza falling into Hamas operatives' hands?

Despite Israeli claims that it strictly controls the distribution of Qatari financial assistance transferred to Gaza, some of the funds appear to be ending up in the hands of Hamas operatives through "commissions," deceit and "protection money." 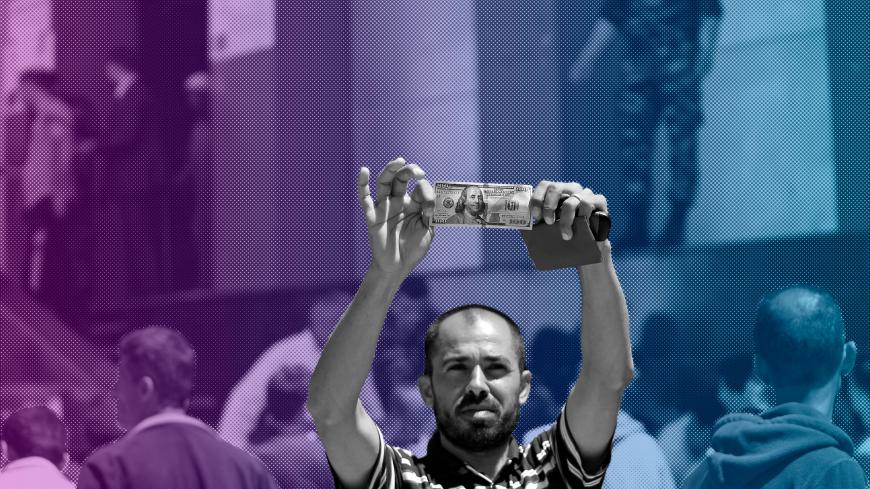 Reports in the Palestinian press note that another tranche of Qatari money arrived in Gaza on June 16. Qatari envoy Mohammed al-Amadi entered Gaza through the Erez crossing and deposited millions of dollars in the branch of the postal service bank on Omar al-Mukhtar Street in Gaza City. It was also reported that the installment is supposed to be distributed to needy families, with each receiving $100. After a series of delays, distribution began, with 60,000 families receiving the grant. While this is a minuscule amount by Western standards, it is no exaggeration to say that in Gaza, it saves countless lives.

Since October 2018, Qatar has distributed tens of millions of dollars to some 100,000 needy families in Gaza. Yet, this is just a drop in the bucket. Gaza is home to about 2 million residents stricken by an astronomical unemployment rate that exceeded 50% in 2018.

Over the last few months, Israeli Prime Minister Benjamin Netanyahu had come under considerable criticism for allowing the transfer of Qatari money to Gaza. His political rivals accused him of having surrendered to Hamas and of paying them protection money. Recently, however, criticism has been much less scathing, perhaps because the next round of campaigning for Knesset elections, scheduled for Sept. 17, hasn’t really started, and party members are still tired from the last elections, held in April. It is also possible that Israelis have simply come to accept that money from Qatar, not from Israel, is flowing into Gaza, and believe that the recipients of the small sum distributed have been approved by the Shin Bet and are not involved in terrorist activities.

In any event, this arrangement, which is a political risk for Netanyahu, has reduced the likelihood of a major armed conflict with Hamas. Although a few brief rounds of violence have erupted in the last few months, they have all been cut short by a series of Egyptian-mediated cease-fires.

While the Israeli political system is showing signs of exhaustion over the Qatari grants, the Israeli security system continues to scrutinize the payments, out of fear that some of the money will trickle down to Hamas’ military wing, the Izz ad-Din al-Qassam Brigades, or “inflammatory activists,” as the Israel Defense Forces puts it.

According to a June 19 report in the Lebanese daily Al-Akhbar, Israel prevented the transfer of money this month to some 5,000 families. According to a source in the Civil Administration, hundreds of Palestinians were removed from the list of those eligible for a grant because of their participation in the demonstrations along the border fence with Israel or for launching incendiary balloons. The source said that Israeli security forces have a “blacklist” of Palestinians who were to receive money but who failed to meet the qualifications this month. In fact, Israeli security forces check recipients' eligibility on a monthly basis. He said that Israel knows which families need aid and whether they use the money for nefarious purposes.

The removal of families from the list of recipients came as a surprise in Gaza. A Hamas source speaking on the condition of anonymity told Al-Monitor, “Israel is looking for excuses. It has no right to initiate a selection process and remove people who engaged in nonviolent demonstrations against it. Demonstrations against the closure are legitimate. The right to demonstrate should not be linked to the receipt of aid by the needy.” The source also said that the Palestinians plan to ask Egypt and the United Nations to intervene in the matter.

At a press conference in Gaza on June 20, Ismail Haniyeh, head of Hamas' political bureau, accused Israel of violating the terms of the cease-fire mediated by Egypt, Qatar and the United Nations. He went on to say that Israel has “no respect” for the 2 million people living under siege in Gaza, who have seen no improvement in their living conditions.

Is some of the money that Qatar sends to Gaza actually making its way to Hamas' military wing? Another source in the Civil Administration who spoke to Al-Monitor on the condition of anonymity said that some 100,000 families are eligible to receive Qatari money. Describing how the money is distributed, the source said, “Huge crowds of people appear at the distribution centers, including Hamas activists with status and power in Hamas. They disguise themselves as needy recipients in order to get money.”

That aside, Israel’s main problem is overseeing the larger sums of money that Qatar sends to Gaza to improve the enclave's infrastructure. It turns out that despite tight Israeli oversight and supervision by UN representatives and the Qatari delegation, there are still ways for Hamas members to acquire funds under the table from local contractors and merchants who have won infrastructure tenders.

“We are still talking about an organization that controls Gaza by force,” explained the latter Civil Administration source. “The big contractors approved by Israel, who get work paving roads, laying water pipelines or fixing power lines, are forced to pay protection to Hamas activists.”

The owner of an Israeli firm that handles the coordination of permits to transfer goods into Gaza and their transport from the Ashdod port to the Kerem Shalom crossing told Al-Monitor, “You’d have to be naive to think that money doesn't trickle down to Hamas.” Speaking on the condition of anonymity, he said that his Palestinian counterparts in Gaza have described how anyone who wins a tender to do work there is required to pay a 10-22% “commission” to Hamas to ensure that they can do the work safely.

“It is easier for everyone to say that Israel has full supervision,” the owner said, “but there is no such thing as full supervision, especially with the really big sums, which allow businesses and contractors involved in infrastructure projects to pay ‘protection money’ to Hamas. Those are the rules of the game, and they [the contractors] know it and accept it. They would starve to death if they ever refused.”

He also told Al-Monitor that to bring merchandise into Gaza, merchants and contractors there need to obtain a permit, and to do so, they must present the local District Coordination and Liaison Office with the tax receipts, or “​muqassa,” they receive from Israel for the goods they've purchased. They are then required to pay an additional 5% “ransom” to the Hamas bureaucrats involved in the permitting and “verifying” merchants' possession of a muqassa. Failure to pay up could mean that they would lose their license to do business in Gaza.

These and similar systems are how money reaches Hamas, including its military wing. Is Israel aware of this? There is no doubt about it. Is Israel ignoring it? In most cases, yes.