The ideological differences and open hostility among the national religious and ultra-Orthodox parties exposed by the April elections could backfire on Prime Minister Benjamin Netanyahu's decision to call for new elections, in September. 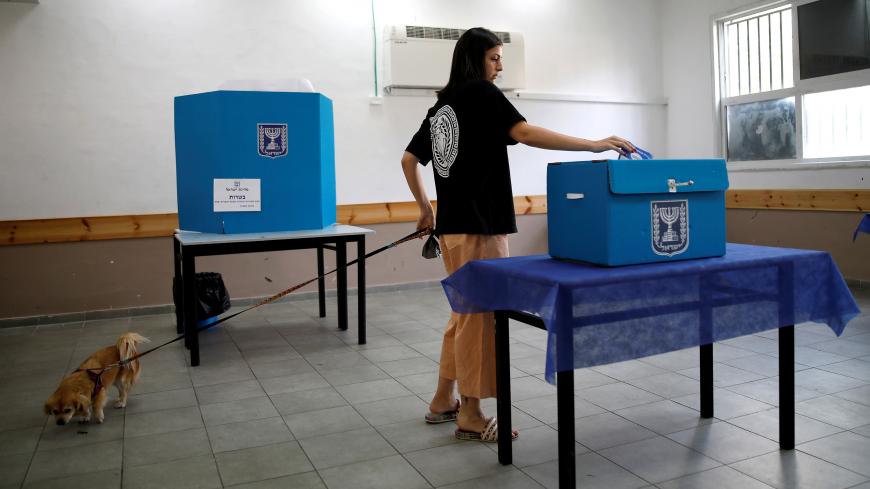 A woman casts her ballot for the 21st Knesset at a polling station, Tel Aviv, Israel, April 9, 2019. - REUTERS/Corinna Kern

In many election campaigns, the parties issue platforms, and candidates give speeches and make promises that everybody knows they won’t be able to keep. Politicians often take advantage of voters’ short attention span to pass economic measures at the start of a term on the assumption they'll be soon forgotten. If election campaigns are like masquerade balls, the morning after the election is when the masks come off. It is then that governments have to make choices to realize policies. The full consequences of Prime Minister Benjamin Netanyahu’s decision to call elections within five months of those held in April are still to be determined, but it is clear that it has caused some politicians to be caught with their masks off, exposed in their embarrassment.

Netanyahu himself has been exposed more than anyone, as he now has to deal with having promised not to work to prevent his own trial but having been found to be doing just that from the moment he thought he would be able to form the next government. In fact, his Likud party has reportedly been trying to advance immunity legislation to help him while trying to assemble a government. On the left, significant opposition to Labor party leader Avi Gabbay has been exposed, and a public quarrel has broken out among Blue and White leaders over cooperating with the Arab parties. Netanyahu’s attempt to form a government with whoever was willing to join him, at any price and under any condition, has exposed the disgrace of the Likud.

All told, however, in no corner of the political map has exposure been as revealing as in the religious camp. The divisions that have characterized this camp since its founding as the Ha-Mizrahi movement in 1902 have now been exposed to the light.

Ha-Mizrahi was established after the Zionist Congress decided to support secular Zionist education. The religious Zionists wanted the Zionist Federation to stick to lobbying for the right to create a Jewish state, leaving the question of life and education in that state to be decided outside the diplomatic necessities. The decision in favor of secular education by the majority of delegates of the congress — who had a clear secular orientation and were concerned about Jewish educational institutions being religious in character — was a slap in the face to devout delegates. As a result, led by Rabbi Yitzhak Yaakov Reines, religious Jews founded Ha-Mizrahi as a movement focused on safeguarding their interests within the Zionist framework, in which they were a minority.

The rabbis heading the new movement were trusted partners of Theodor Herzl, the visionary behind the Jewish state. They supported his suggestion of considering the creation of a temporary Jewish state in Uganda, and he helped them find funding for their goals. After the establishment of Israel, Ha-Mizrahi and Ha-Poel Ha-Mizrahi, the religious worker’s movement created alongside Ha-Mizrahi, founded the National Religious Party (NRP), in 1956.

Meanwhile, anti-Zionist ultra-Orthodox founded the Agudath Israel movement in 1912 in response to religious Zionism, which as noted collaborated with secular Zionism. Agudath Israel saw Zionism as a grave danger to the future of Judaism and therefore avoided involvement with the Zionist movement. These anti-Zionists feared that Zionism would sweep up naive Jews, who would be swayed into believing that Judaism is not a religion but a people and that Jews deserved a Jewish state, attainable as a matter of diplomatic lobbying and devoid of any connection to the Messiah’s arrival. Many things have changed since then, but much has remained virtually unchanged.

The Holocaust of European Jews and the establishment of Israel have changed the anti-Zionist fervor of Agudath Israel — which represents the lion’s share of the ultra-Orthodox Yahadut HaTorah — but not their fundamental reservations about the idea of the establishment of the state. The Ashkenazi ultra-Orthodox define themselves as anti-Zionist or “non-Zionist” and are not members of the Zionist Federation, although most accept Zionism and cooperate with official institutions. At certain moments, however, the anti-Zionist ghost arises, mostly tied to the unwillingness by the ultra-Orthodox to take responsibility for the direct management of the secular state’s affairs — like Health Minister Yaakov Litzman taking the title of deputy minister — or in their dismissive attitude toward symbols of the state and celebration of Independence Day. The biggest difference between the national religious and ultra-Orthodox camps, however, is the ongoing ultra-Orthodox struggle against the military enlistment of yeshiva students, despite the integration of national-religious Jews into the Israel Defense Forces (IDF) and its leadership.

In the Zionist stream today, there exist at least three streams of the religious right: the modern Orthodox, represented to a great extent by New Right leader Naftali Bennett, who seek full integration into the Israeli governing system; the more ultra-Orthodox version of the devout Zionists, led by Rabbi Rafi Peretz, who emphasize obedience to the rabbis in espousing Jewish law as opposed to secular law and obedience to the decrees of rabbis as opposed to army commanders; and adherents of the far-right nationalist Meir Kahane, a stream that is considered a wayward stepchild, even among most of religious Zionism, but because of its significant number of supporters, the larger movement feels compelled to include.

The ideological differences among these groups are significant despite their unceasing efforts to sweep them under the rug. The divides came to the fore on the eve of the April elections for the 21st Knesset, as Bennett and former Justice Minister Ayelet Shaked left the national-religious HaBayit HaYehudi to establish the New Right. The turbulent manner in which Peretz was named to head the United Right (composed of three factions) also exposed differences. These came to light once again in the roundabout way in which Netanyahu forced Jewish Power, Kahane followers, onto the United Right, the offspring of the NRP. The hostility among these groups was exposed following the election, when it erupted in public. Getting ready for the Sept. 17 elections for the 22nd Knesset, it will be hard to get the genie back in the bottle.

There is not much time for these groups to line up, put on their masks and march together toward Netanyahu’s open arms. It may very well be that the Pandora’s box opened after the April elections will lead to the 22nd Knesset looking very different. If Liberman continues in his recalcitrance, and the hostility on the religious right continues or even worsens, Netanyahu’s “brilliant maneuver” of calling a second election will turn into something else entirely. It may be that fewer parties cross the electoral threshold, or if they do pass it, they might find it impossible to sit together in the same government.