Knesset member Betzalel Smotrich of the United Right party is campaigning for Israel to be run according to religious law, and there are no guarantees he won’t make it happen. 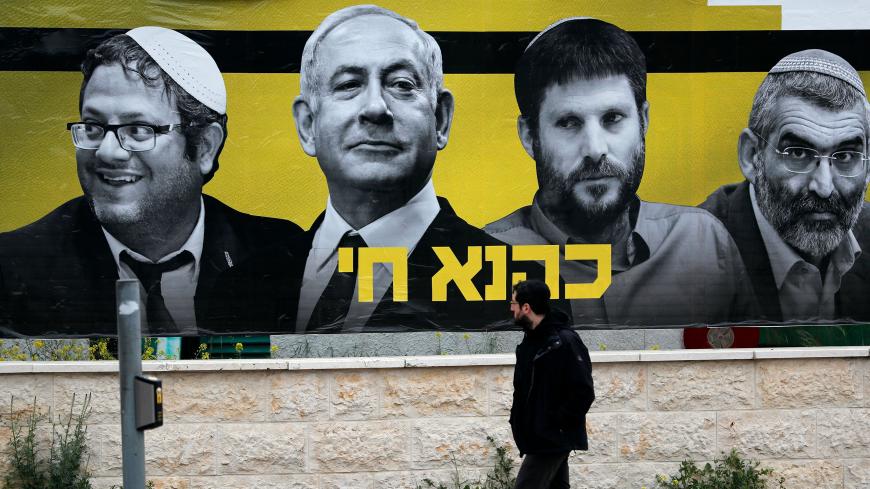 Israel's April elections revolved around the pending indictments against Prime Minister Benjamin Netanyahu. While the centrist and leftist political parties committed not to join a Netanyahu-led government and attacked various proposed immunity laws designed to protect him, the right-wing parties including even ultra-Orthodox Shas have closed ranks around his leadership and proudly declared that they will back Netanyahu.

Now it seems that the focus of the September elections will no longer be the suspicions of corruption surrounding Netanyahu but rather the threat to Israel’s eroding democracy and essence — whether it will continue to be a democratic, secular state or a Torah-based halachic one governed by rabbis and religious rules.

Avigdor Liberman, the head of the secular right-wing Yisrael Beitenu who insisted on passage of his blueprint for ultra-Orthodox conscription as a condition for joining a Netanyahu government, fired the opening shot of this clash. Liberman, whose proposed legislation passed its first reading in the Knesset in July 2018, struck out often against the ultra-Orthodox in recent months, but this week he realized they were not the only political bloc in Israel espousing a halachic state. They are not the only ones to threaten the secular lifestyle of the majority of Israelis. The statement by Knesset member Bezalel Smotrich indicated clearly that part of the religious Zionist population share the same ambitions of a Jewish-law state vision.

During the four-week tenure of the 21st Knesset, Smotrich, chair of the National Union Party and second on the Knesset list of the United Right, staked out a claim as one of the leaders of religious Zionism. The doctrine he espoused proves that the historic, moderate National Religious Party is defunct. A nationalist ultra-Orthodox stream has risen on its ruins, having much in common with the religious vision of ultra-Orthodox Judaism.

Smotrich found a platform for his views at a June 2 gathering marking Jerusalem Day, held at the Merkaz Harav yeshiva, considered for years one of the more moderate and prestigious institutions of the national-religious stream. Now, it seems the nationalist ultra-Orthodox stream has infiltrated it and even taken over.

“We want the justice portfolio because we want to restore the Torah justice system,” Smotrich said, referring to the ministerial positions he and his party would demand after the next elections. He subsequently told Israeli public radio, “The Jewish people is a special people that needs to live according to the Torah.” In other word, down with the Supreme Court and its justices, who he believes rule according to foreign and liberal legal doctrines.

Netanyahu, who was present at the event and had earlier fired his ministers of education and justice, Naftali Bennett and Ayelet Shaked, addressed participants and leveled a snide remark at Smotrich and United Right chair Rabbi Rafi Peretz. “I see you have already been crowned,” Netanyahu said, referring to reports that he may give the two vacated ministerial posts to them. “I’m not going there.” However, in the Netanyahu kingdom, where acolytes call the prime minister “King Bibi,” anything is possible. What currently appears taken from the fantasy world of religious adherents (and a nightmare scenario for secular Israelis) is possible. While Netanyahu did not “go there,” who will guarantee that after the Sept. 17 elections, if he is once against tasked with forming Israel’s next government, he will not give in to the nationalist religious right as he has in the past? After all, Netanyahu was the one who launched the attack on the Supreme Court and opened the door to far-right radicals.

Peretz was offered the leadership of the party after Bennett and Shaked left it. During the election campaign he confronted Smotrich on several occasions. Still, concerning Israel being governed by Jewish law and imposing a Jewish lifestyle on the country, he and other party members accept Smotrich’s position: the ongoing radicalization within religious Zionism.

In his radio interview, Smotrich spelled out what he meant: “The State of Israel and the state of the Jewish people will return to be governed as it was governed in the days of King David and King Solomon — by Torah law.” He went on to assuage concerns that he meant to restore Israel to ancient times or the Medieval era, saying the laws of the Torah would be imposed “obviously in accordance with our days, our challenges and economy and how society lives in 2019.” He reassured his listeners that people who violate the Sabbath laws would “not be stoned so easily.”

Smotrich is well known for his aggressive and belligerent style. Obviously, he is not calling for any stoning or slavery laws. On the other hand, the limiting of secular space and the infiltration of religion into the public space are telling. They reflect the extent of the changes within Israeli society. For instance, the ultra-Orthodox parties and the national-religious would like to see Israel closed on the Sabbath (steps toward forcing supermarkets to close and halt public transportation have already been taken). The Chief Rabbinate and the local religious councils are getting more responsibilities. Women are increasingly excluded inside the Israel Defense Forces and the education system. Female soldiers are prevented from singing at events because religious soldiers protest that they are not allowed to hear it. This exclusion of women spreads into the civil public space as well, where women and men are often separated.

For Smotrich and his colleagues, a Jewish-law state also means overhauling the courts. They want to see more religious judges who might rely on Jewish law. They want a religious state where Jewish law dictates rules and regulations.

Smotrich’s remarks and his determined tone prompted stormy reactions across the political spectrum. Netanyahu was quick to draw a red line, tweeting, “The State of Israel will not be a halachic state.”

How credible is Netanyahu’s pledge? Not very. Already during his first term in office, in 1996, Netanyahu capitulated to ultra-Orthodox demands. When he was defeated by Ehud Barak in 1999, the cheering crowds on Tel Aviv’s Rabin Square, relieved to avoid surrender to the ultra-Orthodox and especially to the Shas party, roared, “Anything but Shas.”

Netanyahu, it should be recalled, was willing to do just about anything to appease Shas spiritual leader Rabbi Ovadia Yosef and Rabbi Yitzhak Kaduri, whispering in the latter’s ears the immortal comment, “The left has forgotten what it means to be Jewish.”

Netanyahu not only gave in to the ultra-Orthodox, but also to the settler movement that has since seen further radicalization. The moderate National Religious Party had served in successive Labor-led governments since the founding of the state. It nurtured national-religious education, institutionalized Kosher dietary laws and controlled the country’s Chief Rabbinate. But over the years, things have changed. The nationalist-ultra-Orthodox-settler movement has taken control of the legacy handed down by the National Religious Party and over its leadership. The vision leading, uniting and characterizing its successors is that of Judea and Samaria (the West Bank) and even the Gaza Strip as the hallowed ground bequeathed to them by God; the holy "land of Israel." The same can actually be said of the Islamist political movements that have arisen in the West Bank and Gaza and hope to impose Sharia on all Palestinians in the territories. These movements sanctify the land in a similar way by decreeing them as "waqf" lands — and not just Jerusalem (al-Quds), but also the West Bank and Gaza.

Smotrich follows in the footsteps of the so-called “hilltop youth,” bands of unruly young nationalists who would place a caravan or tent on a strategic hilltop in the West Bank and thereby plant the seeds of illegal settlements. They forced the government to provide them with basic services, and Netanyahu provided most of them with legal standing after the fact.

The appetite of these nationalists has since grown. The religious right parties are no longer interested only in expanding Jewish settlements in Palestinian areas. They have developed additional aspirations — to weaken the Supreme Court, which makes it hard for them to take over private Palestinian lands, and to impose a religious lifestyle on all Israelis. This way, they can kill two birds with one stone: Instill the sanctity of the land and defang the judges who base their rulings on alien laws, according to Smotrich and his friends. The law of the Torah and laws instituted by King David or Solomon will make the radical religious right’s job easier.

The founders of the State of Israel decided in 1948 that the state would not be based on Torah law and adopted British Mandatory law. The only realm in which religious law was given precedence was that of marriage and divorce. However, for Smotrich and his friends in the United Right, which include the followers of racist nationalist Rabbi Meir Kahane, this is not enough. They aspire to apply the laws of the Torah on all Israelis, a large majority of whom are secular. And this is the point where the real struggle over the character and future of the state of Israel begins.