Iraqi Minister of Electricity Luay al-Khatteeb told Al-Monitor that US exemptions in the energy sector will continue amid tensions in US-Iran relations. 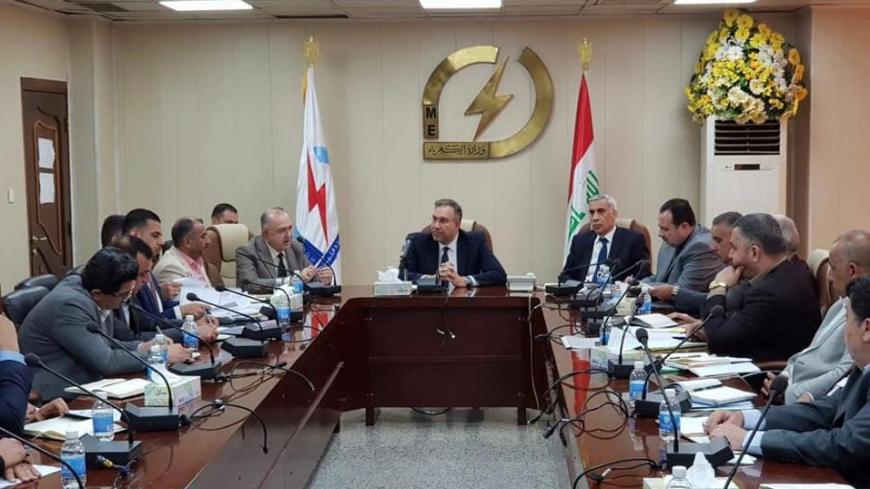 In an exclusive interview with Al-Monitor, Iraqi Minister of Electricity Luay al-Khatteeb talked about the situation of Iraq’s electricity sector amid tense US-Iran relations. He discussed the waiver timeline that Washington granted Baghdad to keep buying Iranian gas and mentioned his fear that some parties are politicizing the electricity sector in Iraq.

Iraqi Prime Minister Adel Abdul Mahdi’s government voted Oct. 25, 2018 to appoint Khatteeb as minister of electricity. Before he was tasked with the ministry, Khatteeb was director of the Iraq Energy Institute and worked as an engineer for several international companies such as British Gas, the Dutch Shell Company and the Indonesian National Oil Company.

Al-Monitor: Does Iraq have any concerns in the electricity sector due to US-Iranian tensions?

Khatteeb: We have taken our precautions, specifically in summer, by putting more optimistic productivity plans, compared to 2018. We increased production for May by around 3,500 megawatts compared to electricity production levels in 2018.

The challenges of the political conflict in the region exist, but through our understandings with the United States, we explained that Iraq should not be involved in regional or international disputes. Our need to import electricity temporarily from Iran might not exceed six months or a bit more, but our need for gas will last for about two to three years until the situation of Iraqi gas improves.

Al-Monitor: What are your concerns and plans if Washington refuses to give Baghdad new exemptions for gas imports from Tehran?

Khatteeb: We have electricity and gas exemptions from the United States. They know and understand our gas needs. Neither the international community nor the United States would benefit from putting spokes in the wheels for Iraq. We have our priorities, and we have been strong US allies in the war against terrorism. We were victorious but paid the price humanitarianly and economically. The exemptions are divided into time periods and are extendable. I believe they will continue because Iraq’s situation is different from that of our countries, and we do not have an alternative.

Al-Monitor: Is there another country you can import from? Some information indicated that Iran is selling you gas at high prices.

Al-Monitor: Do you think Iraqis will take to the streets in summer because of electricity?

Khatteeb: Our past steps have created more energy and have placed us in a better position. Although the situation is not ideal, it is better. To reach radical solutions, major agreements are needed. We hope people will understand that we signed agreements with Siemens and that our contracts with General Electric are ongoing. The radical changes will happen in 2020 because the production capacity and major transportation projects will become operational in the last quarter of 2019, reaching mid-2020.

Al-Monitor: Were you forced into a partnership with both Siemens and General Electric? And are the companies’ contracts part of the international distribution of shares in Iraq?

Khatteeb: The previous administration of the Ministry of Electricity signed two maps to boost the electricity sector, the first being the Siemens roadmap and the second the General Electric roadmap. Both are not binding. We reviewed and outlined the work of these companies, and we prepared an Iraqi roadmap rather than a company roadmap.

The agreement with Siemens was worth 1.7 million euros. With General Electric, we have not signed anything yet regarding the roadmap. But there were development and installation contracts worth 1.5 million euros signed in the past six months. Regarding the roadmap, there has been nothing so far. The timeline of the map is four years and it began May 1. It will be divided over three phases. The competition between Siemens and General Electric should be positive and healthy, and it should serve the reconstruction of Iraq — specifically the power issue.

Al-Monitor: Are there any indications to your claim that the electricity sector is politicized?

Khatteeb: Everything in Iraq is politicized. My hope is that it will no longer be so. At the Ministry of Electricity, we advise all parties interested in Iraqi affairs not to use an imposing tone. We are an independent state, and we have our entity. Iraq is stronger than it was in 2003. Such demands can be asked of a weak state, but not Iraq. Some embassies want to promote their companies; we welcome this idea, but we refuse pressure.

Al-Monitor: What is the situation of Iranian companies that have contracts with Iraq amid US sanctions?

Khatteeb: Everything is working normally. Those companies are limited in number; we pay them in Iraqi dinars with simple contracting operations.

Al-Monitor: Will you announce the privatization of electricity, or did this experience fail?

Khatteeb: Relying on the role of the government in everything has dangerous repercussions and would lead to failure. We are no longer a socialist country. We rely on the market economy and on creating job opportunities. We want to ensure a promising and attractive environment for hard currency to create a strong local private sector. We are examining the possibility of involving the private sector in investing in production and distribution but under strict international conditions that would aid the state treasury with revenue.

Al-Monitor: Did Saudi Arabia propose to sell electricity and gas for a lower cost than Iran?

Al-Monitor: Are you worried about being a victim if protests against the electricity situation are staged and you are dismissed?

Khatteeb: Protesting is a legitimate, constitutional right, and our responsibility in government is shared. Everyone must commit to their duties. The citizen has a right to protest, but he must pay the bill.

Al-Monitor: You don’t have a supportive political bloc. Will you be sacrificed?

Khatteeb: The people are my parliamentary bloc, and I am doing what I should. The decision is up to the parliament. I was questioned by the parliament four times in six months. I am not clinging to the position. I am here to do my job, and I will leave when my term is done.