To alleviate concerns that a visit to Iran might complicate foreigners being able to enter the United States at a later date, Iran reiterated that it will allow tourists to enter the country through its international airports without having their passports stamped. 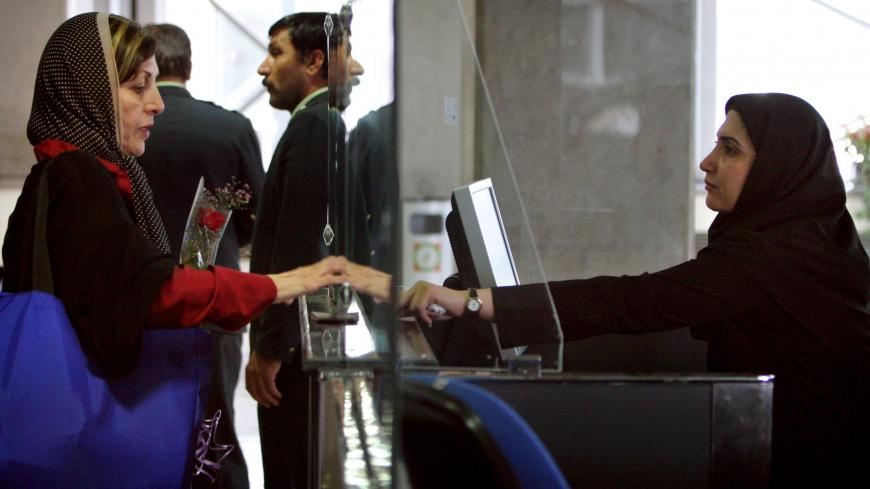 To calm tourists' fear that a visit to Iran might prevent them from being able to enter the United States, Iran announced in June that it is allowing foreign tourists to enter through its international airports without stamping their passports. Under a US law passed in 2015, travelers who visit Iran and six other countries are subject to enhanced scrutiny when later attempting to enter the United States.

Iran’s Mehr News Agency reported on June 23 that President Hassan Rouhani had instructed the Interior Ministry to coordinate with the border police to eliminate rules related to stamping visas in foreign tourists’ passports. Government spokesperson Ali Rabiei had said on June 19 that the move is aimed at attracting larger numbers of tourists. Accusing the United States of “economic terrorism,” he also said that tourists to Iran fear that an Iranian stamp in their passports will create uncertainty for future travel and that the policy of not stamping passports would make them feel “comfortable” about traveling to Iran.

The latest announcements appear to be of an informative nature, as Iranian officials had said in November of last year that they would stop stamping passports. Ali Asghar Mounesan, head of Iran’s Cultural Heritage, Handcrafts and Tourism Organization, had said on August 19 that the plan was based on reducing travelers’ concerns about the US regulations and sanctions.

Some Europeans who have traveled to Iran during the past few months and spoke to Al-Monitor confirmed that their passports had not been stamped upon their arrival at Imam Khomeini International Airport in Tehran. Matthias Koch, a German citizen who travels to Iran frequently, said he was surprised when he entered without a stamp on his last two visits, in late 2018 and spring 2019.

“I think it could have a positive aspect for the average tourist,” Koch told Al-Monitor. “They would feel more secure.”

Under the Visa Waiver Program (VWP), citizens from 38 countries are allowed to enter the United States for 90 days without a visa. Those visitors, including from the United Kingdom, France and Germany, are required instead to register through the Electronic System for Travel Authorization (ESTA).

After the November 2015 Islamic State attacks in Paris, the United States adopted the Visa Waiver Program Improvement and Terrorist Travel Prevention Act (2015), which set out new eligibility requirements for travel under the VWP. Iran, Iraq, Libya, Syria, Sudan, Somalia or Yemen were designated “countries of concern,” and ESTA-eligible travelers who have visited them must apply for a US visa at a US Embassy or consulate instead of registering online. In January 2017, the US President Donald Trump signed an executive order widely referred to as the “travel ban” or “Muslim travel ban,” which makes it more difficult for citizens from seven countries, five of them Muslim and including Iran, to obtain immigrant and nonimmigrant visas to enter the United States.

"Personally, I did not care much [about the stamping procedure] as I have no plans to visit the US in the near future” Koch told Al-Monitor. “Still, a visit should be possible by arranging an interview appointment at the US embassy in Berlin. I guess there'll be quite some questions, looking at my old stamps.”

Nicolas, a French travel agency owner who requested that his full name not be used, said he visited Iran twice in the past year, adding that airport authorities have not stamped his passport since August last year. He organizes tours for French travelers to Iran. Unlike Koch, he had no optimism concerning the new policy.

“To be honest, I don’t think this is going to have an effect on tourism, because it is very simple,” Nicolas told Al-Monitor. “When you go to the US, they ask you if you’ve been to Iran. … Even if you don’t have a stamp in your passport, I don’t think people are going to lie.” He further explained that tourists are concerned that information about their previous travel destinations will be available through passenger manifests.

“I have some tourists that ask me about this, and I tell them that they will have no stamps in their passport, and they say ‘Ok cool. Then we can go to the US.’ But I think it’s a bit complicated because it is dangerous to lie to the US border authorities,” Nicolas told Al-Monitor. “The only thing that you otherwise have to do is to go to the embassy, have an interview and explain why you’ve been to Iran. Or you can ask for a visa for 10 years, which is quite expensive, and it’s not like ESTA, which takes a few minutes on the internet.”

Hamed, a dual national German-Iranian who has lived in the United States, said that with the tightening of US immigration policies, “The willingness of foreigners to visit Iran has gone down.”

“The general perception is that travel to Iran will severely complicate future travel to the US. While [the law] now requires application for a tourist visa, which does impose a burden on said travelers, the vast majority of cases are processed with little to no questioning or complications.”

He added, “I speak here from personal experience since I have taken a number of foreign friends to Iran, many of whom later applied for work permits or permanent resident status in the US. I think the recent change of how tourist visas to Iran are being handled, by not stamping travel documents anymore, is a positive change that will hopefully lift the fear of traveling to Iran.”

Iran says nearly 7.8 million tourists visited the country during the last fiscal year, which ended in March. That figure is a 52% rise compared to the year before, but there are fears that rising tensions with the United State will hamper growth in tourism. Attacks on oil tanker ships near the Strait of Hormuz that the United States blames on Iran, which Tehran has denied, and the Islamic Revolutionary Guard Corps downing a US drone that was allegedly in Iranian airspace, which the US disputes, have put the two countries on a potential collision course.

The rising tensions could have a “huge impact” on tourism to Iran. Nicolas told Al-Monitor, “When the US accuses Iran, it has a much bigger impact on public opinion than when Iran accuses the US,” he said. “I have some tourists who plan to go to Iran soon, and they are really scared. … If the tensions continue like that, I think they are going to cancel the trip.”