The new US president's Jan. 27 executive order to ban Iranians and nationals of six other countries from entering the United States has directly impacted countless families, including couples who have found themselves separated. 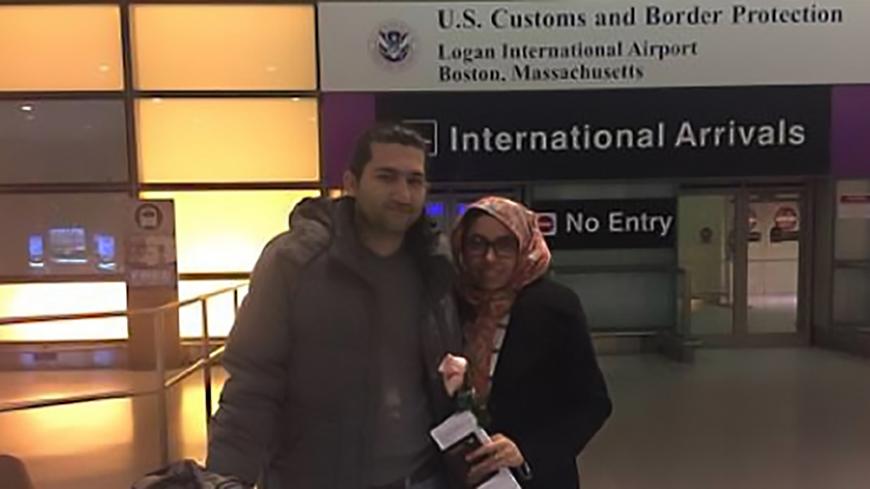 Happy endings are seeming harder to find with President Donald Trump in office, but one potentially heartbreaking story did wind up having a good outcome at Boston’s Logan International Airport. When Poorya Kamali, a 28-year-old studying for a doctorate in chemistry, learned of Trump’s Jan. 27 executive order to ban the entry of citizens of seven Muslim-majority countries, his wife, Fatemeh Safaee, had begun her trip back to the United States from their native Iran. Safaee is a holder of an F-2 visa, which allows spouses of student visa holders to enter the United States. Kamali and Safaee had spent Christmas break in Iran with family; he had returned earlier to begin his semester at the University of Kentucky in Lexington.

“Airport authorities denied her transit in Frankfurt [Germany],” Kamali told Al-Monitor. “They didn't let her board the flight to Chicago. They sent her back to Iran.”

Needless to say, Kamali was devastated. When he initially shared his story, he wasn’t sure he was going to see his wife anytime soon. He said, “I’ve thought about quitting my studies and leaving this country. I can't be here without her.”

Then two federal judges in Massachusetts, Judge Allison Burroughs and Magistrate Judge Judith Dein, imposed a seven-day restraining order on the entry ban. Subsequently, German airliner Lufthansa issued an announcement allowing all travelers with passports from Iran, Iraq, Libya, Somalia, Sudan, Syria and Yemen with valid travel documents to board flights to Boston. Kamali saw the opening and instantly booked a ticket for Safaee to fly from Tehran to Boston via Munich. Then he drove for 17 hours from Lexington to Boston to reunite with his wife.

US Customs and Border Protection kept Safaee for three hours, worrying Kamali. When she finally appeared, he and his wife ran into each other’s arms. “Seeing her in America, then in the car next to me and finally in our own home — it’s so hard to believe. It’s been such a long week,” Kamali recalled.

The situation has returned to that prior to the signing of the executive order — at least for now. Federal Judge James Robart in Seattle on Feb. 3 issued a ruling effective nationwide that temporarily suspended the travel ban. US Customs and Border Protection also agreed to go “back to business as usual.” Even the Department of Homeland Security announced it would not follow the executive order. The White House has vowed to fight Robart’s decision, calling his action an “outrageous order” and described the entry ban as “lawful and appropriate.”

German-Iranian Nima Rasekh, a 27-year-old mathematics graduate student at the University of Illinois at Urbana-Champaign, is still awaiting his own happy ending. His wife, Parivash Tahani, 25, is also a mathematician and currently stranded in Iran as her multiple-entry F-2 visa became invalid once the executive order went into effect. “We went through all necessary legal steps to get a valid visa, but still have been mistreated like this,” Rasekh told Al-Monitor.

Austin Carlson, a 29-year-old American studying for a doctorate in pharmacy at South University in Savannah, Ga., has found himself in a similar situation. He and his wife, Maryam Shaykholeslam, a 34-year-old researcher of heritable genetic diseases at Esfahan University in Iran, got married in both Iran and Turkey in August and sent their paperwork to the US Citizenship and Immigration Services in October. They were waiting for their I-130 visa (petition for alien relative) to be processed when the travel ban was implemented. “This order prevents me from being with my wife,” Carlson told Al-Monitor. “We do feel betrayed, especially me. My country has decided my wife isn’t good enough to come here, for no other reason than where she was born.”

Carlson said he knew there would be obstacles in their relationship, considering the strain in US-Iran relations in recent decades. “We knew this order would come. We had seen drafts and heard it talked about. We only held out hope that things would change and that our fears wouldn't be realized.” Carlson added, “You cannot imagine the moment when you call your wife to tell her it was worse than you had originally thought. How is a man supposed to tell his wife he doesn't even know when they will see each other again? What comfort can I offer her? … We both have a very real fear that she may never be able to come here. We are terrified and completely stunned.”

The Iranian government was quick to reciprocate the ban on the entry of Americans to Iran, although it announced that visas already issued are still valid. The Iranian Foreign Ministry announced Feb. 3 that the US wrestling team would be barred from taking part in the Freestyle World Cup in Kermanshah on Feb. 16-17. However, Foreign Minister Mohammad Javad Zarif announced Feb. 5 that the American wrestlers would be let in and that other exemptions would be made through a mechanism set up by the ministry. It’s now unclear whether Carlson will be able to travel to Iran to see his wife.

How this ban impacts the United States

Rasekh doesn’t think the country has changed as a result of the travel ban. “Even if Trump lost and none of these things happened, then it would still be the same country with the same people," he said. "Most people in my town are perfectly fine people and I always knew that many places in the United States would react to me with far more hostility.” He does fear that US immigration policy will change, and thinks heading back home to Germany is probably best. He told Al-Monitor, “[There is] no point in staying if I'm just going to be harassed every day by the government and any agreements we have made might be canceled any second.”

He isn’t optimistic about the future. He believes the power of organizations such as the American Civil Liberties Union is limited — especially with Sen. Jeff Sessions, R-Ala., known for his anti-immigration stance, awaiting confirmation as the new US attorney general. He said, “Right now it seems like the hot topic, but in a couple of weeks — when, for example, repealing Obamacare becomes a thing — most people will forget about it and move on.”

Carlson says his family can be traced back to Ellis Island. “We are a nation born from and enriched by immigrants,” he told Al-Monitor. “This new executive order affects Americans. It harms those who have family overseas and it sows uncertainty and chaos in our lives. Perhaps even more importantly, it harms the United States of America as a country. Our diversity, our freedom, our values — they are our true strength. Actions such as this undermine them all.”

There are countless other couples in the same situation. As Al-Monitor sought more out for comment on how they have been affected by the executive order, many said they were unwilling to share their stories — not for their personal privacy, but out of fear of reprisal from the US government.