Beyond impacting travelers and their families around the world, the US president's move to ban citizens of seven Muslim-majority countries from the United States has crushed academics at home and abroad. 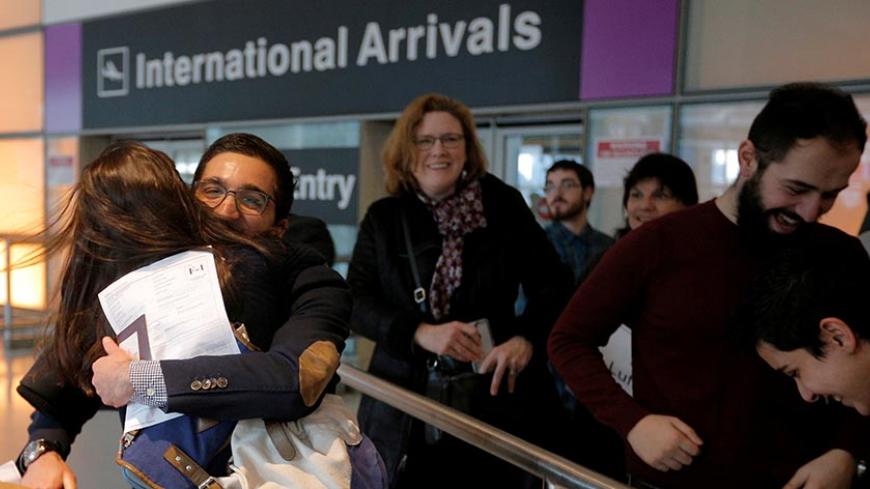 Behnam Partopour, a student from Iran, is greeted by his sister Bahar (L) at Logan Airport after he cleared US customs and immigration on an F-1 student visa in Boston, Massachusetts, Feb. 3, 2017. - REUTERS/Brian Snyder

When US President Donald Trump signed an executive order banning the entry of citizens of seven Muslim-majority countries Jan. 27, travelers and families around the world were plunged into confusion and disbelief. The sudden and unexpected move disrupted the lives of people who have been endlessly vetted over years. Sick grandparents were kept from entering the United States for medical treatment, and an Iranian baby girl was initially denied access to life-saving surgery. Before the clarifications came in the days after the announcement, even green card holders traveling outside the United States struggled with the prospect of not seeing their American children for the foreseeable future.

Even though US District Judge James Robart ordered a national halt to the enforcement of Trump’s executive order Feb. 3, the effects on academia in the United States remain.

More than 17,000 students in the United States come from the seven banned countries. In the 2015-16 academic year alone, Iranian students with visas to study in the United States numbered 12,000, with the vast majority enrolled in graduate degree programs. In the same academic year, students from Iraq numbered 1,901, Syria 783, Yemen 599, Somalia 35, Libya 1,514, and Sudan 253.

In interviews with Al-Monitor, students who remain reluctant to have their full names published for fear of reprisal from immigration officials at US borders relayed stories of anxiety as they contemplate being forced to abandon their studies.

The ban has already had an unprecedented impact on many bright minds who make important contributions to US academia.

When the executive order was announced, Sara, a Ph.D. biology student originally from Syria, found herself stranded in Europe, where she had gone over winter break to visit her ailing mother. Hossein, a Ph.D. student in anthropology, did not know if he could return from Iran, where he has been conducting fieldwork for the past eight months. Seyed Soheil Saeedi Saravi, a PhD researcher from Iran and a newly accepted fellow at Harvard University’s Brigham and Women’s Hospital, was barred from entry. Suha Abushamma, a physician at the world-renowned Cleveland Clinic originally from Sudan, was detained in New York upon her arrival and sent back to the Middle East. Samira Asgari, an Iranian with a Ph.D. from the École Polytechnique Fédérale de Lausanne in Switzerland, was prevented from boarding a plane to Boston at the Frankfurt Airport to begin work on a tuberculosis project at Harvard Medical School.

American universities have been quick to respond. Presidents from the United States’ leading colleges and universities have individually and jointly sent letters to Trump, including a widely publicized letter from 47 university presidents stressing that the executive order threatens American higher education. In addition to publicly voicing their dissent, university leaders have also sent out emails to faculty and students, vowing to provide legal assistance to their international students and faculty members affected by the order.

Subra Suresh, the president of Carnegie Mellon University (CMU), wrote a particularly strongly worded letter to his university community, saying, “The topic of immigration is very personal to me. … I first came to the US at age 21 with a partially filled suitcase, less than $100 in cash, and a one-way airplane ticket purchased with a loan. Once in the US, I was able to pursue a series of extraordinary opportunities for scholarship and service without regard for my national origin — an experience that forged in me an unshakeable faith in the ability of this nation to help everyone to succeed, wherever they came from.”

Suresh added, “My own story is just one among millions that have shaped the history of this country. Immigration and international collaboration are not footnotes in the story of higher learning. Andrew Carnegie, CMU’s founder and such a central figure in America’s industrial dominance during his time, was an immigrant. All six Americans who were awarded Nobel Prizes in 2016 were born abroad, as were a substantial portion of the membership of the US National Academy of Sciences. Tens of thousands of foreign-born students, researchers, scholars, innovators and faculty members across the country, including many at CMU, do pioneering work at the cutting-edge of science, technology and artistic creativity. The point is clear: Our very prosperity and security as a nation, and thus our freedom, depend in part on the people who come to this country from around the world.”

Over 30,000 US faculty members and 62 Nobel laureates have signed a petition condemning the executive order.

The executive order has had other negative effects on American academia. For instance, the backlash against the ban has extended to Iran, which has announced a reciprocal ban on the issuance of visas to US citizens, though not retroactively.

The Association for the Study of Persianate Societies had long planned to hold a major conference bringing together American and Iranian scholars. The conference was set to be held in March in the southern Iranian city of Shiraz. But shortly after the executive order was made, the association announced that the historic gathering, which 45 Americans were set to attend, had to be canceled.

To be clear, the reciprocal visa ban by Iran has prompted a backlash too. Last week, 72 academics at Iran’s prestigious Sharif University publicly called on the Iranian government to do away with its retaliatory ban and allow US academics into the country. Meanwhile, universities across Canada and the United Kingdom have stepped up to offer admission to students destined for American universities but who now face being refused entry into the United States.

As of this writing, legal efforts to keep the ban from being further implemented seem to be working. But even if the ban is lifted entirely or ends after the executive order's specified 90 days, its effects seem likely to linger much longer.

“Even if the courts in the US overturn Trump’s order, I don’t know if I want to be in a country where the administration sees me as a threat,” Ali, an Iranian PhD student in the social sciences, told Al-Monitor. “And Trump is so xenophobic and so unpredictable that who knows if this order gets overturned, but another one is put in its place? Will I forever be barred from visiting my family in Iran for fear that I won’t be let back into the US to finish my studies, which I’ve now spent decades on?”