The Trump administration’s "Travel Ban 3.0" runs the risk of turning current Iranian Americans into the last of their kind. 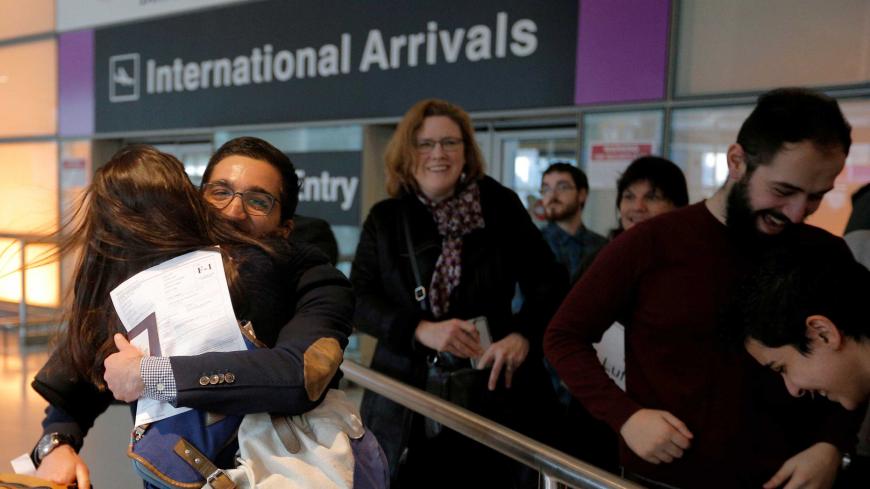 Behnam Partopour, a student from Iran, is greeted by his sister Bahar (L) at Logan Airport after he cleared US customs and immigration on an F-1 student visa, Boston, Mass., Feb. 3, 2017. - REUTERS/Brian Snyder

On Sept. 24, the United States announced a revised travel ban that, unlike its predecessors, may face fewer legal hurdles. “Making America Safe is my No. 1 priority. We will not admit those into our country we cannot safely vet,” President Donald Trump tweeted just after his administration released the details of his new proclamation.

Given that 62% of nonimmigrant travelers impacted by what many dub Travel Ban 3.0 are Iranian citizens, this indefinite ban — if upheld — could have long-term consequences on the Iranian-American community.

Unlike the previous two bans, the new measure — which adds Chad, North Korea and Venezuela to the list of blacklisted countries while removing Sudan — may be upheld as legal for a number of reasons, as Elie Mystal, editor of Above the Law, has pointed out. First, the ban says the United States requires certain information from countries before giving their citizens visas for travel to the United States, and puts forward that Iran, Libya, Syria, Yemen, Somalia, Chad, North Korea and Venezuela cannot meet those requirements. Second, it says countries can get off the list if they provide this information. And third, it treats different countries differently.

These parameters, which did not exist in the first two versions of the travel ban, could mean that the ban could potentially be upheld in court. Furthermore, the new ban does not affect those with validly issued green cards, visas or travel documents. It also does not apply to refugees; new rules governing refugees will apparently be announced soon. However, unlike the other two bans, this ban has no end date — it only requires periodic reviews.

The first ban, which attempted to prohibit the entry of green card holders and those with valid visas, came under immediate attack by activists and civil rights groups. The second ban, which had a focus on families of US citizens, also faced immediate pushback.

Amy Malek, a scholar of the Iranian diaspora and professor at the College of Charleston, told Al-Monitor, “Travel Ban 2.0 placed kinship at the fore, requiring travelers from these countries to possess bona fide relationships with US citizens. In doing so, the Trump administration made bizarre assumptions about who we regard as kin, which relationships are real and therefore which deserve to be preserved through granting rights to travel.” She added, “In response to community protests and judicial challenges to these interpretations, Travel Ban 3.0 dealt with that pesky kinship problem by imposing a blanket ban on nearly everyone, regardless of any relationships or bona fides.”

Although the Trump administration claims that it is no longer a Muslim ban because of the addition of non-Muslim majority countries, Becca Heller, director of the International Refugee Assistance Project, has argued, “Of [the newly added] countries, Chad is majority Muslim, travel from North Korea is already basically frozen, and the restrictions on Venezuela only affect government officials on certain visas.” As such, the Trump administration’s claim that Travel Ban 3.0 doesn’t single out Muslims appears far-fetched.

As the bans have disproportionately affected Iranians, the Iranian-American community has organized itself in the past few months with a series of lawsuits, amicus briefs, direct actions and campaigns to reverse the bans. Organizations such as NIAC Action have teamed up with 12 major civil rights groups to oppose the ban. Along with organizations such as the ACLU, Muslim Advocates and Amnesty International, NIAC Action will in coming weeks deliver petitions from constituents demanding Congress take action. The National Iranian American Council has stated, “Amending this ban does not change what its intent has been since its inception, which was clearly to ban Muslims. The Trump Administration has simply tried to make the president’s racist proclamation to ban all Muslims more palatable.”

If it becomes indefinite — which could very much be the case given the absence of diplomatic relations between Iran and the United States — Travel Ban 3.0 will have severe consequences for the Iranian American community. Neda Maghbouleh, a professor at the University of Toronto and author of a book on race and Iranian-Americans, told Al-Monitor, “One short-term consequence is that Iranian nationals working in America won’t even be able to renew their work visas, much less stay on a more permanent basis. This is disastrous for American industries that have long relied on Iranian human capital to grow our economy and maintain a competitive advantage in sectors like biomedical science, tech and engineering.”

Al-Monitor also spoke with Mana Kharrazi, the executive director of Iranian Alliances Across Borders. The group filed an amicus brief that was cited in the 9th Circuit’s ruling deeming the revised travel ban unconstitutional in June. Commenting on the revised travel restrictions, she said, “The administration’s ban is an attack on our communities and discriminates based on national origin and religion. Barring our families from the United States protects no one and only perpetuates the hatred that has left us vulnerable to violence over the past year. We must challenge this ban and the hatred at its root. We absolutely have a right to exist in the United States and refuse to be pawns in a political agenda that has little to do with safety and security.”

The issue of "safety and security” is the animating question of the new proclamation. It claims that the new ban will allow the United States to know that the people traveling from the blacklisted countries are who they say they are. But as Amy Malek told Al-Monitor, “Diaspora communities often rely on travel and transportation to thrive, whether to maintain social networks, operate transnational businesses or sustain family relationships across borders. And these relationships benefit America in numerous ways, whether cultural, economic, political or social. So to claim this blanket ban benefits all American citizens — as the proclamation does — ignores the millions of American citizens whose relatives, partners and colleagues are effectively and indefinitely blacklisted by this new proclamation.” She added, “This is not a minor inconvenience. It is deeply painful, it is callous and it is rooted in anything but a genuine concern for the safety and well-being of this country and all its citizens.”

Yet the direst consequences could be for the future of the Iranian-American community. Maghbouleh told Al-Monitor, “[The ban] represents a foreclosure of possibilities for the future of Iranian-Americans. Relative to other groups, we haven’t been in the United States as immigrants for very long — only really the last 40 years. But now, because immigration from Iran is banned indefinitely, those of us who are already here — either as naturalized citizens or born to our Iranian immigrant parents — have to imagine a future where we might as well be the last Iranian-Americans.”