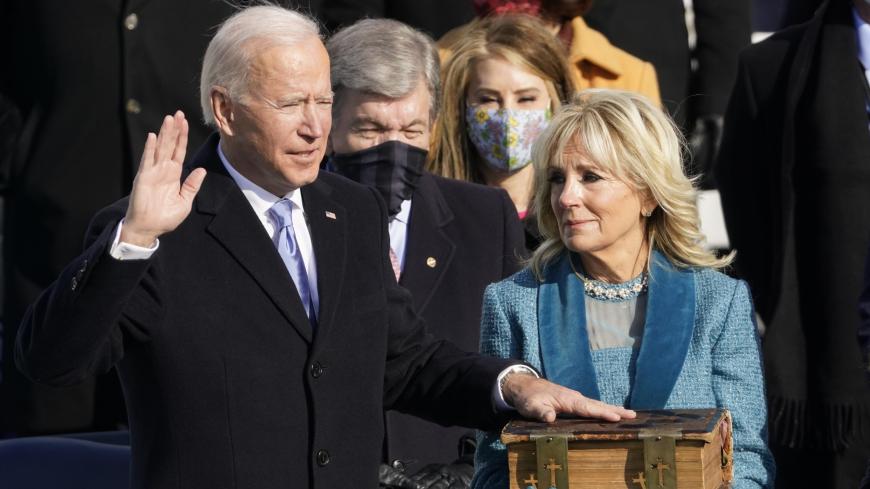 Joe Biden is sworn in as the 46th president of the United States by Chief Justice John Roberts as Jill Biden holds the Bible during the 59th Presidential Inauguration at the US Capitol on Jan. 20, 2021, in Washington. - Andrew Harnik - Pool/Getty Images

With the stroke of a pen, President Joe Biden has ended his predecessor’s ban on travelers entering the United States from several Middle Eastern and African nations, fulfilling a campaign pledge to dismantle policies seen as discriminatory against Muslims.

Early iterations of the travel ban, which followed Trump’s campaign trail comments calling for “a total and complete shutdown of Muslims entering the United States,” were struck down by federal courts. The Supreme Court in 2018 upheld a revised version that also barred travelers from North Korea and certain Venezuelan government officials. Last year, the Trump administration imposed additional restrictions on travel from Eritrea, Kyrgyzstan, Myanmar, Nigeria, Sudan and Tanzania. Iraq was dropped from the list of banned countries in 2017.

Krish O’Mara Vignarajah, president and CEO of Lutheran Immigration and Refugee Service, said Biden’s decision to overturn the Trump-era travel ban Wednesday sends a clear message that the United States will once again be a welcoming nation for immigrants and refugees.

“Turning the page on this dark chapter in American history is the first step in rebuilding and reimagining an immigration system that works humanely and justly for all,” Vignarajah said. “The concern is going to be, what does the pipeline of individuals abroad look like and how quickly can we resume the program?”

Processing the backlog of visa applications won’t be easy. US immigration and consular officials will have to sort through the thousands of names languishing in a sort of limbo known as “administrative processing" where applications are sent for further review.

Those who were originally denied entry due to the travel ban may also want to reapply. A waiver process allowed applicants who met certain criteria to gain entry to the United States, but critics said the system was confusing and arbitrary. Between December 2017 and March 2019, just 5% of those who had applied for a waiver were granted one, according to State Department figures.

To complicate matters for the new administration, the coronavirus has slowed down the processing of visas across all US consulates, said Muzaffar Chishti, senior fellow at the nonpartisan Migration Policy Institute in Washington.

“Government machinery is very difficult to unwind in the best of circumstances,” Chishti said. “The pandemic adds a layer of complexity to this.”

Biden’s executive action makes good on a campaign promise to reverse what he described as a “vile” ban that was part of an “assault on black and brown people.” Iman Awad, deputy director of Muslim-American advocacy group Emgage Action, commended the president but said there's more to be done.

Emgage Action and other immigration advocates are calling on Congress to pass legislation that would amend the Immigration and Naturalization Act to ensure no future administration can institute a blanket ban without offering credible evidence and appropriate oversight.

They're also calling on the new president to fulfill his pledge to admit 125,000 refugees in fiscal year 2021, compared with Trump’s 15,000 cap. The historic cuts made to the US refugee resettlement program during the Trump administration saw the number of Muslim refugees admitted to the United States plunge from nearly 40,000 in 2016 to just 2,500 in 2020.

Biden signed the execution action terminating the travel ban in the Oval Office; he also has called for a direct review of the Trump administration’s “extreme vetting” practices. The president also announced he is sending immigration legislation to Congress that includes new funding to promote integration and inclusion, increase English-language resources and assist individuals seeking to become US citizens.

“People can strut— just a little — today. Then, we get on with work,” said Anthony Elghossain, a Beirut-based lawyer who, along with others, assisted families impacted by the travel ban.

He recalled when a Syrian-American woman called to let them know that she and her spouse had made it to the United States after years spent waiting for his visa to be cleared.  “I don’t know where she, or everyone else, is today,” Elghossain said. “But I can see her smile.”