The announcement followed Trump's attack on refugees during a campaign rally in Minnesota. 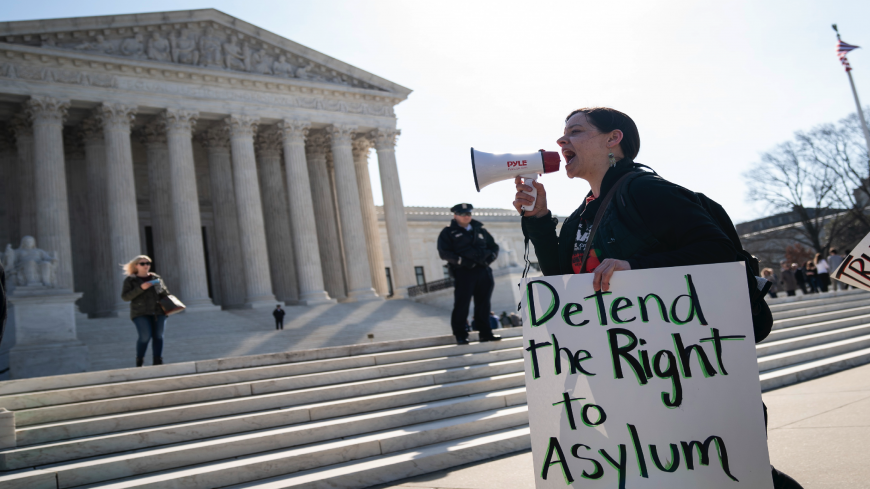 A small group of activists from BAMN (Coalition to Defend Affirmative Action, Integration & Immigrant Rights, and Fight for Equality By Any Means Necessary) protest outside the US Supreme Court on March 2, 2020, in Washington, DC.

The administration told Congress late Wednesday night that it planned to bring no more than 15,000 refugees fleeing war and persecution to the United States in fiscal year 2021, compared to the maximum 18,000 permitted in 2020.

Trump has cut the country’s refugee intake three times before, first slashing former President Barack Obama’s quota by more than half, to 50,000, during his first year in office. The State Department cited a backlog of 1.1 million asylum cases and defended the new 15,000-person ceiling as one that reflects “administration’s continuing commitment to prioritize the safety and well-being of Americans, especially in light of the ongoing COVID-19 pandemic."

According to a statement from the State Department, there will be specific allocations for religiously persecuted refugees, Iraqis whose work with the United States has put them in danger, and refugees from El Salvador, Guatemala, Honduras, Hong Kong, Cuba and Venezuela.

Trump, who has sought to limit both legal and undocumented immigration during his presidency, warned during a campaign rally in Duluth, Minnesota, on Wednesday evening that Biden would increase refugee admissions “from the most dangerous places in the world including Yemen, Syria and your favorite country, Somalia.”

Minnesota has one of the highest populations of refugees per capita in the nation. Rep. Ilhan Omar (D-Minn.), who came to the United States from Somalia as a child, is a favorite target of the president.

“Biden will turn Minnesota into a refugee camp, and he said that — overwhelming public resources, overcrowding schools and inundating hospitals. You know that. It’s already there. It’s a disgrace what they’ve done to your state,” Trump told the crowd.

At 125,000 refugees, Biden’s proposal quota is significantly higher than Trump’s but more in line with those of past presidents. Prior to the current administration, the United States had admitted an average of 95,000 refugees per year since the modern refugee program was created in 1980.

Trump has drawn criticism among Evangelicals, a group whose support he sought in 2016, for failing to do more to protect refugees, in particular those fleeing religious persecution. In a letter this month, more than 200 bishops and reverends from the Evangelical Lutheran Church in America urged the White House to restore refugee intake to the previously typical levels.

Trump’s order comes amid the world’s worst refugee crisis on record, with waves of displacement from countries such as Syria, Myanmar and Afghanistan. By the end of 2019, 79.5 million people were forcibly displaced from their homes, according to the United Nations. Of those, 26 million were refugees.

“Those fleeing violence, war and religious persecution in the region have had the door slammed shut on them, both because of drastic cuts in admissions, as well as xenophobic bans that discriminate based on national origin,” said Krish O’Mara Vignarajah, president and CEO of Lutheran Immigration and Refugee Service, a nonprofit that works with the federal government to resettle refugees.

“It’s unconscionable that, of the countless families who have been forced from their homes in Yemen, literally only one person was resettled in the United States this past year,” she told Al-Monitor.

Yemen is embroiled in a civil war that, according to the United Nations, has created the world’s worst humanitarian crisis. An estimated 24 million people — some 80% of the population — are reliant on humanitarian assistance.

Of the 11,814 refugees resettled in the United States this fiscal year, just 481 came from Syria. Since the uprising in 2011, more than half of Syria’s pre-war population of over 12.7 million people has been forced to flee their homes.

The Trump administration’s refugee proposal arrived as lawmakers complained they had not been consulted on the numbers, as legally required. This week, congressional aides told Al-Monitor that the Democratic leadership on the House and Senate Judiciary committees was not made aware of the admissions plan.

“President Trump has harsher words for innocent refugees than for the dictators they are escaping,” they said in a statement Thursday.