Trump mum on refugee admissions despite pleas from Congress

The administration has drastically reduced the number of refugees resettled annually in the United States. 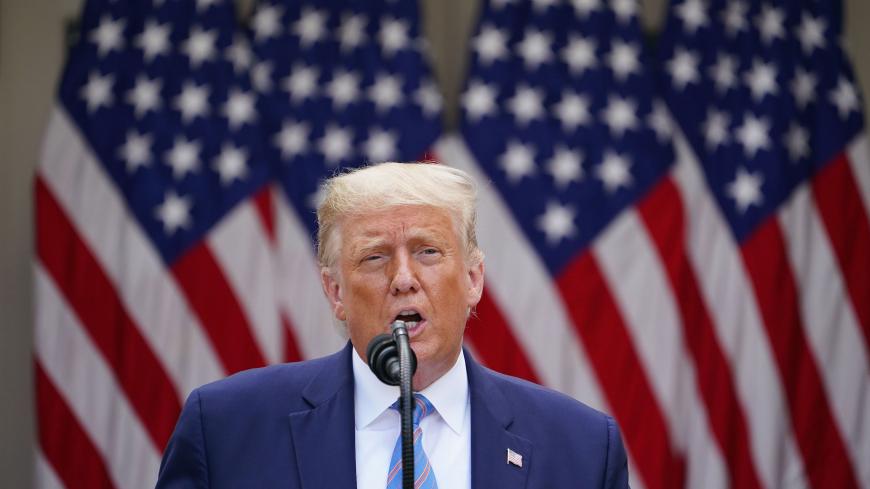 The Trump administration still has not told Congress what next year's cap on refugee admissions will be, as required by law. Here, US President Donald Trump speaks about COVID-19 testing, in the Rose Garden of the White House in Washington, Sept. 28, 2020. - MANDEL NGAN/AFP via Getty Images

As conflicts across the Middle East bring continued waves of displacement, the Trump administration hasn’t yet told Congress how many refugees will be allowed to settle in the United States next year, despite a legal requirement that it do so.

Before the new fiscal year starts Oct. 1, the White House is required by law to report to the House and Senate Judiciary committees next year’s cap for refugee admissions. Prior to issuing a determination, the administration is supposed to send Cabinet-level officials to consult with members.

That hasn’t happened. Democratic staff told Al-Monitor that the administration has not attempted to schedule the statutorily required consultation or shared its proposed admissions plan with the committees, despite repeated inquiries.

“Given the magnitude of this crisis, the United States must not abandon our leadership role in providing safety to refugees who are most in need of resettlement,” Democratic Sens. Dick Durbin of Illinois and Dianne Feinstein of California and Democratic Reps. Jerry Nadler of New York and Zoe Lofgren of California wrote in a Sept. 8 letter.

“The law is clear that the consultation must occur before the start of the fiscal year,” they wrote. “Yet, for the last three years, the Trump administration has refused to consult with Congress in a timely or meaningful manner.”

The United States has admitted an average of 95,000 refugees per year since 1980, with the exception of the last several years under Trump. The president has steadily chipped away at the program, setting a cap of 18,000 refugees for the current fiscal year.

As of Sept. 28, 10,892 refugees had been resettled in the United States — just over half the number proposed. During the first 10 months of the fiscal year, fewer than 200 refugees arrived from Syria, where nearly a decade of civil war has produced 5.6 million refugees and left a further 6.6 million Syrians internally displaced.

Earlier this month, the bipartisan US Commission on International Religious Freedom, a congressionally appointed watchdog, pressed the administration to restore the admissions target to the previous average of 95,000.

“Unprecedented numbers of individuals worldwide are forcibly displaced by conflict or persecution, including based on their religion or belief, yet the resettlement to the United States of religious minorities and other refugees has declined sharply in recent years,” commission Chair Gayle Manchin said in a statement.

“The United States must continue to offer safe haven to those targeted for their faith,” she said.

Ancient faiths across the Middle East are shrinking in number. Six years after the Islamic State swept through northern Iraq, the country's oft-persecuted Chaldean and Assyrian Christians, as well as the ancient Yazidi religious minority, still fear for their survival. In war-wracked Yemen, the Houthis have targeted members of the Baha'i community over their beliefs, which the Iran-aligned rebels consider heretical.

If he wins in November, former Vice President Joe Biden has said he will increase the refugee cap to 125,000 per year and seek to increase admissions over time.