Intel: US watchdog calls on State Department to add Syria to list of religious freedom violators

Secretary of State Mike Pompeo should designate Syria as one of the world’s worst religious freedom offenders and put Iraq, Turkey and Egypt on a special watch list, the US Commission on International Religious Freedom recommended in its annual report. 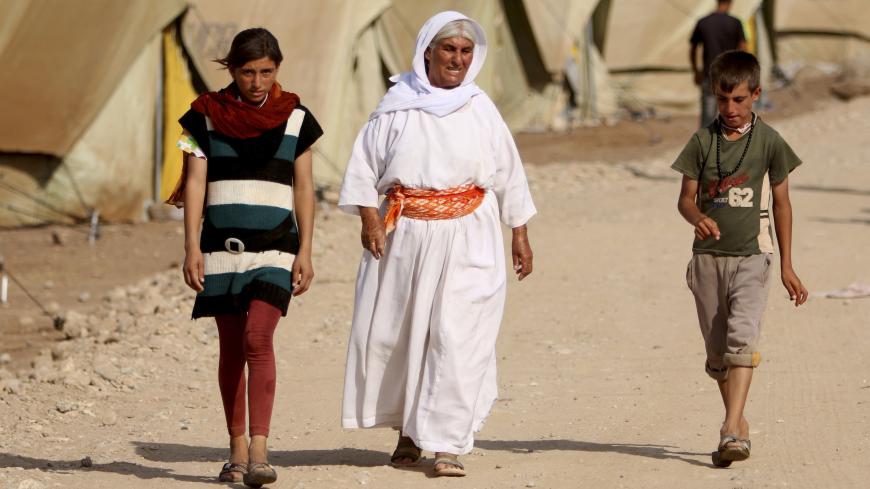 Refugees from the minority Yazidi sect, who fled the violence in the Iraqi town of Sinjar, walk past tents at Nowruz refugee camp in Qamishli, northeastern Syria, Aug. 17, 2014. - REUTERS/Rodi Said

Secretary of State Mike Pompeo should designate Syria as one of the world’s worst religious freedom offenders and put Iraq, Turkey and Egypt on a special watch list, the US Commission on International Religious Freedom (USCIRF) recommended in its annual report.

Syria’s majority Sunni population accounts for most of the victims of President Bashar al-Assad’s nine-year-long campaign to crush the opposition, including the recent Russian-backed government offensive in opposition-held Idlib province.

Syria is also home to Alawis, Shia Muslims, Druze and a small number of Jews and Christians. The report notes ongoing violations against those minorities by radical groups including the Islamic State (IS) and Hayat Tahrir al-Sham (HTS).

The number of Yazidis in Syria, an ancient monotheistic religion targeted with mass executions and sexual slavery by IS, continues to dwindle. In the country’s Afrin region, rights organizations have accused Turkish-backed armed groups of destroying religious sites and forcing Yazidis to convert to Islam.

“The Assad regime has not stepped in to stop any of it,” USCIRF Vice Chair Nadine Maenza said of religious persecution in Syria. “They tolerate it.”

The notable exception to Syria’s status as a country abusing freedom of religion is the Kurdish-led autonomous administration in northeast Syria, the report concludes. Maenza calls it the only part of the region that’s seen an increase in religious freedom this past year.

“To create a government that emphasizes tolerance for religious freedom in the neighborhood they’re in, it’s a remarkable thing,” said Maenza. “It is a place that could be a sanctuary for religious minorities to be able to practice their faiths.”

The watchdog, whose commissioners were appointed by Congress and President Trump, also recommended April 28 that 11 new countries be included on the State Department’s Special Watch List, including Egypt, Iraq and Turkey.

Why it matters: Religious freedom in the Middle East is under continued attack at a time when US refugee admissions are at an all-time low. For fiscal year 2020, President Donald Trump set the cap at 18,000, with just 5,000 slots reserved for people fleeing religious persecution.

In its report, USCIRF recommends the administration return to the annual ceiling of roughly 95,000 and prioritize those under attack for their religious beliefs in countries like Syria.

What’s next: USCIRF has for seven years straight recommended the State Department revise its list of CPC-designated governments to include Syria.

There is a chance that doing so could trigger a new round of penalties on the Assad regime, as the International Religious Freedom Act requires the president to take action in the event of a CPC designation. The State Department, however, has historically reimposed existing sanctions or reissued waivers against transgressing countries.

Among its other recommendations, USCIRF called on the Donald Trump administration to release all of the $50 million in stabilization assistance that the White House promised in October 2019 would be used to support ethnic and religious minorities in Syria.

The administration should also put significant pressure on Turkey to withdraw from the northeast and ensure that neither its military nor the rebel groups fighting on its behalf abuse religious and ethnic minorities in Kurdish-held Syria, the report said.

Know more: Bryant Harris examines how Congress is preparing sanctions on the Assad regime and its backers under the Caesar Syria Civilian Protection Act. In northwest Syria, Khaled al-Khateb takes a look at the recent defections of prominent leaders within HTS.