While the declared aim of Trump administration’s “maximum pressure” campaign against Iran is to pressure the Islamic Republic to alter its policies, Iranian women and civil society are also being subjected to extreme constraints. 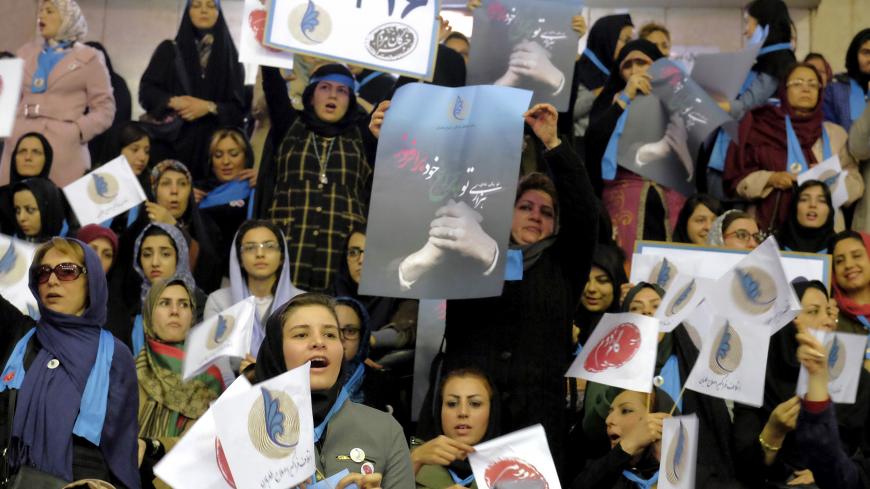 As tensions between Iran and the United States reached dangerous levels in recent weeks, Iranian human rights activists warned about the dire ramifications of sanctions and other pressures for women and the women’s rights movement in Iran.

The US policy of “maximum pressure” on Iran has been composed of ever-expanding sets of sanctions imposed in the aftermath of President Donald Trump’s unilateral withdrawal from the 2015 nuclear deal last year. The pressure has been intensified by a looming threat of imminent war. Not surprisingly, maximum pressure is having a big impact in Iran — but perhaps not the impact the United States claims to seek.

The worsening implications of US sanctions are reaching alarming levels, with women and the women’s rights movement in Iran among the collateral damage.

Indeed, Iranian women complain about the spiraling prices of imported contact lenses, cancer and diabetes drugs and even sanitary pads and tampons. They have had to resort to food rationing and substitution strategies to stretch a weak rial and feed their families as the reimposition of US extraterritorial sanctions batters the Iranian economy.

Washington maintains that sanctions do not apply to medicines and food. While technically true, in reality ordinary Iranians are seeing shortages of drugs, medical supplies and other essential goods as banking channels have been shut down and Iran faces limited access to foreign currency.

One 28-year-old mother from western Kermanshah province told Al-Monitor about her newborn baby, who was diagnosed with acid reflux in April. The doctor prescribed a Zantac (ranitidine) syrup. “We searched all the pharmacies in my hometown and then I called my friends in Tehran but the syrup was nowhere to be found,” said Nasrin, who asked that her last name not be used. Finally, she ordered the syrup, which is produced by British multinational GlaxoSmithKline, from Iraqi Kurdistan through family acquaintances. “We paid 120,000 tomans [$28.50] for the syrup, while the same syrup was available in the pharmacies in Iran for just 25,000 tomans [$5.95] before the [reimposition of US] sanctions.”

US officials have repeatedly stressed that they have legitimate concerns about the Iranian government’s behavior and that they need to take action. Yet so far women, children and ordinary Iranians who were not part of the Islamic Republic's decisions seem to be those most directly suffering as the country’s economic decline is having broad social and public health impacts.

“There is no doubt that women, like the rest of society, have suffered greatly from the sanctions,” said Nazanin, a female lawyer from Shiraz who asked that her last name not be used. “Recently I caught a urinary tract infection and the doctor said she had seen an alarming rate of women with infection in the last six months. The foreign imported sanitary pads are in short supply and reputable brands like Always are very expensive, which means women have to rely on the low-quality Iranian version.”

As the Trump administration’s “maximum pressure” campaign against Iran unravels the day-to-day stability of the lives of Iranian women, it also is undermining the very movements that fight for women’s rights. Indeed, dozens of Iranian human rights defenders conveyed to Al-Monitor that they simply no longer have the time or means to dedicate themselves to voluntary activism. As a recently expatriated Iranian Kurdish human rights lawyer explained, “When you have the members of the middle classes unable to meet their basic needs, the civil society organizations promoting human rights, including women's and children’s rights and the environment, usually lose their edge because their members become more concerned about making ends meet.”

Predictably, Iran’s powerful security services have intensified their crackdown on dissenters, using rising international tensions as a pretext. There are dozens of human rights lawyers and activists now also rotting in jail — and women’s rights activists are feeling the state’s repressive hand as much as anybody.

The United States has a long-standing policy and public record of supporting human rights promotion in Iran and speaking out on behalf of persecuted human rights defenders. With escalating tensions and increasingly harsh policies coming out of Washington, however, such positive efforts on the part of the US government are becoming overshadowed by the negative impacts of its other policies.

There is no doubt that successive Iranian governments have mismanaged the national economy, tolerated unfettered corruption and diverted huge resources to the military. Similarly, it is undisputable that Iran’s abysmal human rights record is born out of the policy choices of those in power in Tehran. Without doubt, Iran’s leaders deserve a hefty deal of blame for what is happening today. Having said that, within the region, issues such as economic mismanagement, corruption and human rights abuses are sadly not unique to Iran. What has pushed the situation in Iran over the edge are the US punitive policies and rhetoric that have helped cripple the economy, exacerbated corruption and emboldened the most repressive elements of the state.

“I am totally against the sanctions by America,” said Maryam, a teacher from Tehran who declined to give her full name for fear of retaliation from the authorities. “The sanctions have no effect on the families of the officials, the pressure is on the people. People are afraid.”

If the United States is ever going to see positive change in Iran, that change will likely come from women and civil society groups in the country. Indeed, women and civil society have consistently advocated for normalized relations between Iran and the United States. But as the lives of ordinary Iranians become more difficult and just about every bit of time and energy is spent on making ends meet, the space for activism shrinks and participation in political life becomes more and more of a luxury that few can afford. As such, all signs point to increased repression and lesser civil society activism as the shadows from the US sanctions grow longer.