Washington's mounting pressure on Tehran might have been expected to forge unity among Iran's rival political camps. But Iranian hard-liners seem to be seizing the moment by attacking an already weakened Rouhani administration ahead of key polls next year. 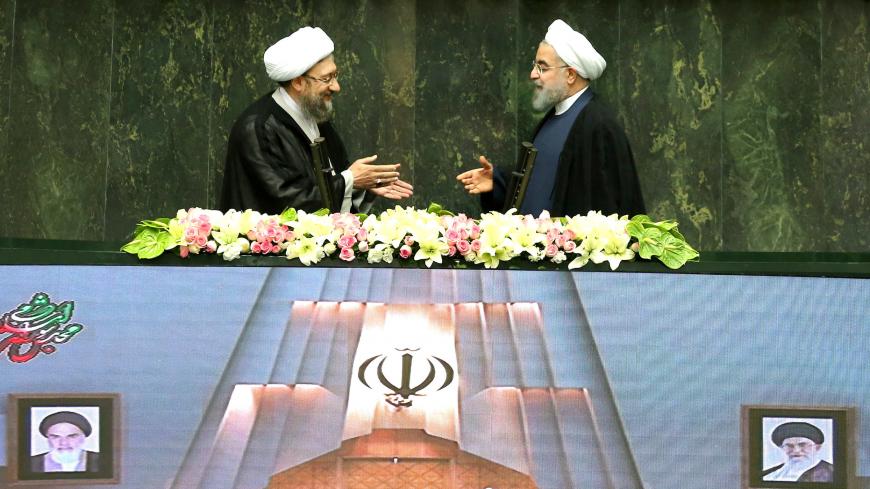 Iranian President Hassan Rouhani (R) extends his hand to Iran's Judiciary Chief Sadegh Larijani during a swearing-in ceremony for Rouhani for his second term, at the parliament in Tehran, Iran, Aug. 5, 2017. - Nazanin Tabatabaee Yazdi/TIMA via REUTERS

The recently intensified US pressure on Iran is, according to many observers, bridging the gap between the country's rival political camps. But on the ground, signs indicate otherwise. Indeed, Iran's multilayered politics remains plagued by fundamental internal strife — and the US pressure is exacerbating it.

Calls for unity from Iranian politicians have in recent months grown louder than ever. In a May 12 speech, President Hassan Rouhani urged all to stand together against US hostility. But such unity among clashing political forces as well as the many parallel state bodies in Iran has far from materialized. In fact, the ratcheted-up US campaign in the form of both hostile rhetoric and reinstated sanctions has not brought these Iranian political camps any closer together. It would perhaps not be excessive to even argue that the US pressure has opened a new chapter of the endless infighting in Iran. Now, heated debates are revolving around how to proceed with the United States and whether rapprochement under the current circumstances is the best policy.

These differences could not have been more striking at a recent meeting between Rouhani and figures representing leading political groups. Some of the participants at the meeting maintained that dialogue has to be exhausted before it is completely rejected, while others pushed to take dialogue off the list of Iran's options because of US enmity.

At the top decision-making level, there are vital issues that seem to be falling victim to that very strife — among them the two contentious parliamentary bills on combating the financing of terrorism and accession to the United Nations Convention Against Transnational Organized Crime, known as the Palermo Convention. Adoption of these bills are part of the Financial Action Task Force (FATF) action plan to have Iran removed from its blacklist.

Long before the fresh wave of US pressure, the two pieces of legislation promoted by the Rouhani administration were already facing bumps. Hard-liners insisted that they run counter to Iran's national interests, and that ratifying them would be tantamount to treason. The government maintained that failure to approve them would cost the country dearly as this would provide a pretext for more outside pressure.

While parliament — where the majority of legislators are Reformists close to the Rouhani administration — passed the bills in 2018, the powerful, hard-liner-dominated Guardian Council blocked them, throwing the ball into the court of the Expediency Council, which is tasked with mediating disputes between the parliament and the Guardian Council.

Following the Trump administration's decision last month to designate the Islamic Revolutionary Guard Corps as a foreign terrorist organization, Iranian hard-liners have found the already controversial bills to be no longer relevant, demanding that the Expediency Council kill them. The moderate administration, however, considers such a move as illogical and reactionary. After conservative former Tehran Mayor Mohammad Bagher Ghalibaf said ratification of the bills while under sanctions is tantamount to "suicide," Laya Joneidi — Rouhani's deputy for legal affairs and one of the very few female figures within the president's circle — responded, "The administration holds the view that in order for our banking relations to be maintained, we need to approve the FATF-related bills. We can't afford to speed up our inclusion on the FATF blacklist."

What further drew the ire of Rouhani's hard-line critics was his request for more authority in his battle against "foreign threats." Rouhani has urged an end to interference by parallel institutions in macro policies, drawing reactions from figures such as Guardian Council spokesman Abbas-Ali Kadkhodaee, who said, "Compared with his predecessors, Rouhani has already enjoyed greater powers." Kadkhodaee asked Rouhani whether he had even utilized the problem-solving "capacity" his existing powers have granted him.

A far harsher message came from the Friday prayer leader of the northeastern conservative city of Mashhad, known for his fierce diatribes against Rouhani. "We have seen someone else who was granted powers but fled the country with colorful makeup," Ayatollah Ahmad Alamolhoda said, making an allusion to Abolhassan Bani-Sadr, the first elected Iranian president after the 1979 Islamic Revolution who was impeached by parliament in 1981 and left for exile in France. In the Islamic Republic's official narrative, Bani-Sadr is a "traitor" who wore female makeup and clothing to avoid arrest during his escape from the country.

There also is a wider campaign of pressure from hard-liners, manifested in their calls for the impeachment of Oil Minister Bijan Zangeneh and repeated arguments that the Rouhani administration is failing and unfit and thus carries blame for the country's problems. In terms of timing, all of this is occurring with only nine months left until Iran's next parliamentary polls. In the time until then, one can expect further friction and an intensified blame game between the two camps if outside pressure, particularly from the United States, continues to heighten.

Also on the horizon is the June 2021 presidential election, which has already triggered debate over who will replace Rouhani. In one of his most recent speeches, Supreme Leader Ayatollah Ali Khamenei advised a group of university students "to prepare the ground for the advent of an administration shaped by young forces with strong revolutionary commitments." Khamenei appeared to be expressing dissatisfaction with the Rouhani government, which he probably perceives as aging and not revolutionary enough. This also highlights the criticality of the 2021 vote from his perspective. In the same speech, Khamenei notably tried to distance himself from Iran’s signing of the Joint Comprehensive Plan of Action (JCPOA), reducing his role in the accord to an advisory level — while also complaining about the way the deal had been implemented, further laying bare the deep crack within Iran's ruling elite.

Given the context of this widening gap between rival camps, the argument that outside pressure is boosting domestic unity seems to be flawed and incompatible with the current realities in Iran's political landscape. To put it more simply, the hard-line opponents of the Rouhani government think that growing US pressure has to be utilized as a tool to help tilt the domestic political balance in their favor — an opportunity they have no intention of letting go of.