Feeling the burden of US sanctions on Iran, the Popular Mobilization Units are flexing their muscles in Iraq, trying to strengthen their position. 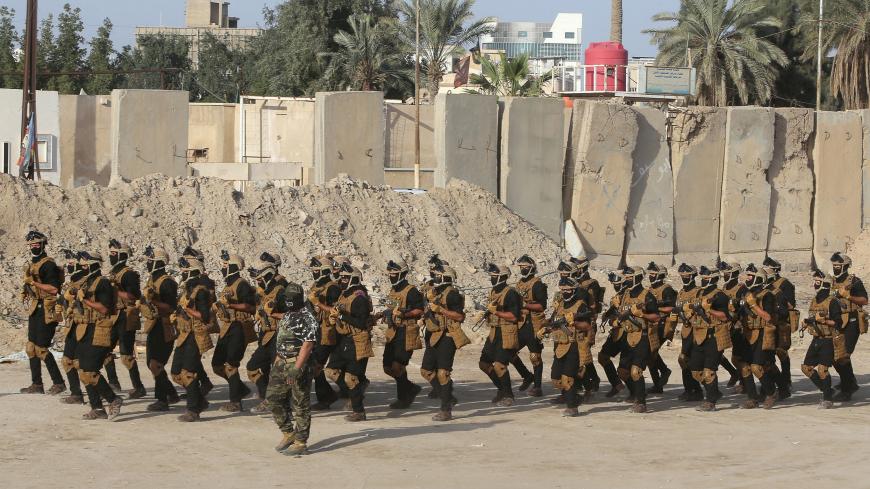 As the United States tightens the noose on the Iranian economy, Iran-backed Iraqi militias are feeling the pain more than ever.

The US Treasury's Office of Foreign Assets Control imposed sanctions June 12 on an Iraq-based company that is believed to be a financial conduit for Iran’s Islamic Revolutionary Guard Corps (IRGC), the Quds Force in particular.

The company — South Wealth Resources Company, or, in Arabic, the Manabea Tharwat al-Janoob General Trading Company — is headed by two Iraq-based individuals, Makki Kazim al-Asadi and Mohammed Husayn al-Hasani, who have also been sanctioned by the US Treasury. The United States accuses both individuals, as well as Abu Mahdi al-Muhandis, the deputy of the Popular Mobilization Units (PMU), of receiving commission payments for contracts with the South Wealth Resources Company.

According to the US Treasury, the company and its two associates traffic weapons worth hundreds of millions of dollars to Iran-backed militias in Iraq. They have covertly facilitated IRGC access to the Iraqi financial system to assist the corps in evading US sanctions.

The “Treasury is taking action to shut down Iranian weapons smuggling networks that have been used to arm regional proxies of the IRGC Quds Force in Iraq, while personally enriching regime insiders,” Treasury Secretary Steven Mnuchin said in a statement.

Following the imposition of sanctions on the Iraqi company, PMU leader Moeen al-Kadhimi slammed the United States on June 13 for imposing pressure on the Iran-Iraq relationship. He said the Americans are trying to besiege the economic relations between the two countries by putting Iraqi companies on terrorist lists.

"Iraq is in dire need of trade with Iran," he said, according to Rudaw. "It needs Iranian gas and electricity, but Americans are trying to stifle this trade exchange and put pressure on Iran through Iraq."

June 13 was the anniversary of the PMU's establishment. The PMU bloc in the Iraqi parliament proposed a resolution to have the day declared a public holiday nationwide. Parliament passed the resolution on the same day.

PMU Deputy Abu Mahdi al-Muhandis published a public letter the same day thanking Grand Ayatollah Ali Sistani for mobilizing the Iraqi people against the Islamic State (IS) in 2014 and for providing spiritual support to the PMU during the battle.

“We stood fighting in front of the enemies of religion and humanity complying with your [Sistani's] orders and your advice," Muhandis said. "We fought for days and nights and we offered blood after blood and sacrifices after sacrifices for one and only one purpose: to keep Iraq united and lofty.”

This is the first time Muhandis has approached Sistani directly. He has never met Sistani, and it is likely Sistani will not reply to his letter. Sistani is very cautious in meeting and communicating with Iraqi politicians affiliated with the IRGC, including PMU leaders.

In the context of the Muhandis letter, PMU head Falih al-Fayyad said in a speech June 14 that the PMU would stay in Iraq and that there is no concern about the units' fate. Any action to dissolve the PMU, he said, would fail.

Recent PMU activities and statements suggest the group is feeling the painful effects of domestic political pressure and US sanctions against Iran and its regional proxies. But the United States is not the only entity that wants to curb PMU activities. Haider al-Abadi and Muqtada al-Sadr's Reform alliance also supports restricting the PMU within state boundaries.

Ayatollah Ali Sistani is in favor of the Iraqi government fully controlling the PMU. He refers to the PMU as "the volunteers" in his statements, not the PMU, signaling that they should not be separated from the Iraqi army.

Iran supports the PMU as an independent force separate from the army, similar to the Iranian Basij forces. On several occasions, Iranian Supreme Leader Ali Khamenei has called upon Iraqi government to not dissolve the PMU or merge it with the Iraqi army. This way, Iran can preserve its influence in Iraq and use the PMU as a proxy for its regional schemes.