Divisions in Iranian society over the country's hijab laws are being exposed in a massive backlash over a taxi driver's clash with a female passenger he found in violation of veiling norms. 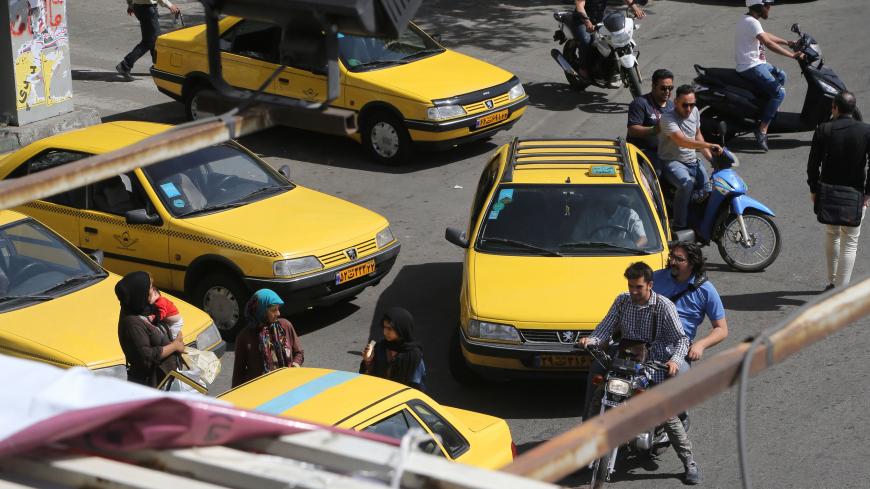 Iranians navigate traffic on the eve of the presidential elections, Tehran, Iran, May 18, 2017. - ATTA KENARE/AFP/Getty Images

When Pooyeh Nourian tweeted her outrage with a Tehran cab driver she had ordered through a popular ride-hailing app, she probably had no idea that her tweets would open a Pandora's box on Iran's controversial hijab rules.

Minutes into embarking on the trip from Tehran's affluent north, the young Iranian woman was criticized by the driver over her failure to observe proper hijab. In the ensuing angry exchange, Nourian was dropped off halfway to her destination, according to her account. The male driver, Saeed Abed, meanwhile, claims that he offered to transfer the passenger back to the departure point and she refused.

Nourian immediately tweeted the exchange in protest, saying Snapp — the widely used Iranian version of Uber — promised to look into the matter. Her posts also included some identity details of the driver, which she made public in the form of a screenshot taken from the app.

But that was not the end of the dispute that started on June 6. In hours, Snapp issued a statement meant to appease both the passenger and the driver. Social media rumors had it later that the driver had been suspended, drawing reactions from hard-liners who started promoting a boycott of the app.

The powerful camp's pressure intensified to the point where Snapp had to release a new statement in which it denied having placated the female customer and even praised the driver, promising a formal expression of gratitude to him for his obedience to regulations. The move managed to largely contain the hard-liners' rage.

Four days following the encounter, the passenger erased all her tweets and in a new post issued an apology to the ride-hailing company, the driver and "all those whose feelings had been hurt" and pledged "compliance and commitment" to Iranian laws. The unexpected apology triggered speculation that she had expressed it under duress.

The driver was then idolized by much of Iran's conservative camp, including some political and military leaders with zero tolerance for those who view hijab as a personal choice.

The state broadcaster, controlled by hard-liners and widely criticized for its perceived one-sided coverage of events, invited the driver to an exclusive interview, where he was given a podium to offer his own account. His picture next to a smiling commander of the aerospace force of the Islamic Revolutionary Guard Corps, who praised the driver's handling of the passenger, quickly went viral.

In its June 10 coverage of the story, Kayhan, which is affiliated with the Iranian supreme leader's office, reported that a documentary is to be produced featuring the "rule-bound driver." And a day later, the spokesman for Iran's judiciary expressed admiration for Abed's "promotion of virtue and prevention of vice," a principle the Islamic Republic advises the public to implement individually.

The chain of events sparked ferocious responses from civil society activists and opponents of Iran's mandatory hijab. They vented their anger at the online taxi company by campaigning for a boycott, publishing screenshots as proof that they had removed the app from their smartphones.

As the heated debate was slowly cooling off, a new image dropped a bombshell. Holding thick books on religion, Nourian was seen along with her parents next to the driver, whose pleased expression contrasted starkly with that of Nourian's mother. The wrathful backlash this time transcended the partisan divide. Some from within the conservative camp criticized the release of the picture as intended to humiliate the girl and her mother.

The picture boosted the boycott campaign against the app while Iranian society seems more split than ever over the contentious issue of compulsory hijab.

All in all, the red-carpet treatment Iran's hard-line officials gave the driver was a clear indication of what the matter means to them. In a renewed harsh warning June 13, the country's public prosecutor noted that hijab is one of the Islamic Republic's "red lines" and that "the judiciary will not allow" rejection of it to become a trend.

For the time being, Nourian is quiet on Twitter. But the immediate loser in the aftermath of the controversy appears to be Snapp.

Although the mandatory hijab is enshrined in Iranian law, the Islamic Republic's approach toward disputes over it seems not to be leading to peace over the divisive law.