Iranians rail against Apple, Google over pulling of apps

US tech giants Apple and Google have removed Iranian-developed apps from their online stores, sparking a backlash. 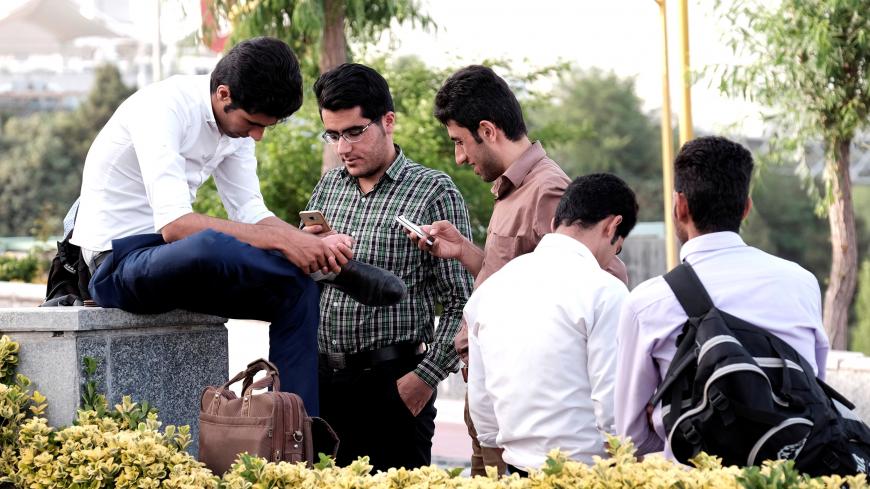 Iranian youths use their mobile phones as they rest at a park in Tehran, Iran, May 16, 2017. - REUTERS/TIMA

Imagine trying to hail an Uber on a street corner only for the Uber app on your iPhone to suddenly stop working. That’s what happened to some Iranians when Apple pulled Snapp, a popular local ride-hailing app, from its App Store on Aug. 24. The US technology company purged over a dozen popular Iranian apps, including Alopeyk, an on-demand delivery service; Delion, a food delivery service; Digikala, an online store; Takhfifan, a coupon service; and Zoraq, a travel-booking service.

Now when the name of a popular Iranian app is typed into Apple's App Store search engine, suggestions for alternative titles pop up, or in some cases, the following message appears: “The item you requested is not currently available in the US store.” Amid the confusion, Iranian iOS app developers received a message from Apple, stating, “Under the US sanctions regulations, the App Store cannot host, distribute, or do business with apps or developers connected to certain US embargoed countries.” The week after Apple’s purge, Google followed suit, removing Iranian apps for Android phones from Google Play.

Tyler Cullis, an associate sanctions attorney with Ferrari & Associates, P.C., told Al-Monitor, “It is unclear why Apple and Google were permitting the hosting of Iranian apps on their respective app stores in the first place, but the decision to remove them appears consistent with US sanctions laws.”

There is indeed the possibility that Apple and Google may have misinterpreted US sanctions law. In March 2010, under the Barack Obama administration, the United States granted a license — known as the General License D-1, or Personal Communications GL — authorizing a range of activities, including permitting Iranians to access and download mobile phone apps from US app stores. Deputy Treasury Secretary Neal Wolin said at the time that the license was to ensure that Iranian citizens, and others, could practice their “most basic rights.” Cullis pointed out, however, “[It] does not appear to permit Apple or other US tech companies to host apps created by Iranian users on their app stores and make those apps for sale.”

Apple and Google are not alone in barring Iranians from their services. Iranians also have no access to Adobe, Android Developer, Dropbox and PayPal, among many other online services.

Although Apple has no corporate presence in Iran, millions of Iranians have jailbroken iPhones imported from China, the United Arab Emirates and elsewhere. The devices are sometimes sold for double or triple the original price. There are even shops in Tehran that claim to be legal distributors, and in some cases, emulate the Apple Store experience. Local media reported on Sept. 24 that the iPhone 8 and iPhone 8 Plus arrived in Iran less than 24 hours after their release and were going for double the US price, with shops charging customers a pre-sale price of 130 to 250 million rials ($3,864 to $7,431) for the iPhone X.

According to Telecommunications Minister Mohammad Javad Azari Jahromi, more than a tenth of the 48 million smartphones in Iran are iPhones, making Iran one of the largest markets in the Middle East. Despite Apple’s purge, some Iranians, accustomed to having to resort to circumvention, are bypassing the restrictions by downloading alternative, Iranian-designed iOS app stores, such as Sib App and Nassaab. Meanwhile, others, unaware of the alternative iOS stores, are even going so far as to switch to Android phones, so they can use Iranian-designed Android marketplaces, like Cafe Bazaar, to download Iranian apps. Google’s Android operating system is compatible with an array of mobile companies' devices, including from Samsung, which opened a Tehran sales center in February.

Iranians quickly took to social media — much of which is accessed through circumvention tools since it is blocked by the Iranian government — to express their frustration, using the hashtag #StopRemovingIranianApps. Many tweeted in English during Apple’s annual September product event using the hashtag #AppleEvent. One developer tweeted, “I wont be able to buy the great iPhone X because as a persian iOS developer I wont have a job soon.” Another Iranian posted on Twitter, “Today @Apple is the first enemy of iranian iOS developers. We are developing software not nuclear weapon.”

Since the apps' removal, an online petition addressed to Apple CEO Tim Cook and Iranian Foreign Minister Mohammad Javad Zarif has circulated, attracting more than 16,000 signatures as of Sept. 26. On Sept. 18, the Bloomberg Editorial Board defended Iranian entrepreneurs, arguing that the goal of the sanctions was to pressure the Iranian government, but also stating, “Restrictions on apps have instead handed Iran’s government a propaganda gift, allowing it to rail against American technology companies for discriminating against Iranian business people and consumers.”

Cullis told Al-Monitor that while some Iranian officials believe the measures harm the Iranian people, hard-liners bemoan the concern and urge Iranians to develop their own technologies, so reliance on companies like Apple is not necessary.

Payam, an Iranian computer engineer who only gave his first name, expressed his frustration to Al-Monitor, “Google’s Play Store was not allowing Iranians to use it until a couple of years ago since there are alternatives, but the app removal is just sad. It’s like the JCPOA [Joint Comprehensive Plan of Action] never happened.”

It is unclear whether the Donald Trump administration is applying pressure on US technology companies, given the president’s staunch stance against the Iran nuclear deal. During remarks to the UN General Assembly on Sept. 19, Trump called the nuclear deal, which was signed by Iran and the six world powers, “an embarrassment to the United States.” He went on to explain how the Iranian people were suffering under their own government.

If Trump cares for the well-being of the Iranian people, and wants them to “be happy and prosperous once again,” he can start by getting their apps back on Apple and Google’s online stores.