As the Iranian protests die down, hawkish lawmakers and dovish advocates are united in their concern that US sanctions are inhibiting protesters’ ability to organize. 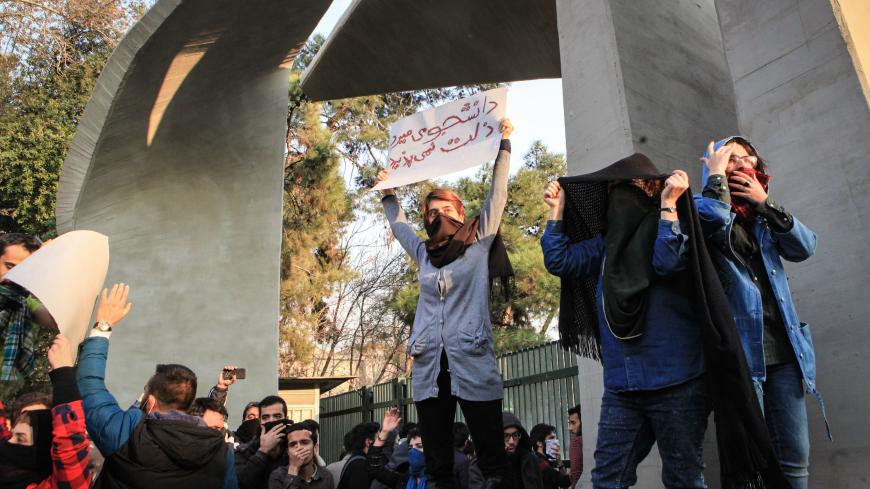 Iranian students protest at the University of Tehran during a demonstration driven by anger over economic problems, in the capital Tehran, Iran, Dec. 30, 2017. - STR/AFP/Getty Images

Iran responded to the groundswell of protests that emerged in the new year by clamping down on popular social media and messaging apps used by Iranian demonstrators to organize. But the United States has also complicated protesters’ efforts with sanctions that have hindered protesters’ ability to communicate and mobilize online.

Now a coalition of advocacy groups that support better ties with Tehran have forged an unlikely alliance with Iran hawks in Congress to try to rectify the chilling effect that US sanctions have had on US technology firms. Together, they are urging the Donald Trump administration to provide greater flexibility for US companies to provide social media and digital platforms to Iranian citizens.

Activists were notably successful in persuading Rep. Ed Royce, R-Calif., and Eliot Engel, D-N.Y., the chairman and top Democrat on the House Foreign Affairs Committee and enthusiastic proponents of the Iran sanctions regime, to include language to that effect in legislation denouncing Tehran’s crackdown against the protesters. The nonbinding resolution, which passed the House 415-2 Tuesday, now “encourages the administration to expedite the license of communications technology to Iran to improve the ability of the Iranian people to speak freely,” and “calls on companies to reject requests by the regime to cut off the Iranian people from social media and other communications platforms.”

The Public Affairs Alliance of Iranian Americans in a press statement claimed credit for successfully lobbying lawmakers for including the technology exemption language. A House aide confirmed that account.

“Treasury has the authority to do this,” Morad Ghorban, the director of government affairs and policy for the alliance, told Al-Monitor. “What Congress can do through legislation and letters and things like that is encourage Treasury to review this stuff and issue new licenses.”

The Barack Obama administration issued a general license in 2014 allowing US companies to provide social media, networking and software services to Iranian users. However, the coalition believes that since Trump’s election, Apple and Google have become wary that the Obama-era license does not give them adequate legal leeway to allow Iranian users to access their products.

Collin Anderson, a public policy adviser for the Iranian Americans alliance, told Al-Monitor that the Trump administration’s more hawkish posture on Iran has made US technology companies more hesitant to take advantage of existing exemptions that allow the businesses to provide telecommunications and other software services in Iran.

Supreme Leader Ayatollah Ali Khamenei has steadily consolidated control over online communications in Iran to the point where Tehran was able to briefly cut off Iranians’ access to the internet when the protests erupted late last month. Iran has also blocked access to Telegram, an encrypted messaging app, Instagram and other social media sites in a bid to inhibit protesters’ ability to communicate and organize. Signal, which is widely regarded as the most secure encrypted messaging app, is also banned.

Ironically, US sanctions against the regime have further constrained protesters’ ability to mobilize as more than 100 commonly used apps and other software made by US companies are currently unavailable for use by the Iranian public. For instance, US companies have declined to provide messaging and communication apps such as Gmail, Google Hangouts, Facebook Messenger and Periscope to Iranians out of fear of US legal repercussions.

The sanctions also limit Iranians’ access to the latest versions of anti-virus software, leaving journalists and activists at the mercy of state-sponsored hackers.

Advocacy groups such as the Iranian Americans alliance, the Center for Human Rights in Iran, the National Iranian American Council and others have also expressed concern to the Trump administration that sanctions have prompted companies such as Apple and Google to stop providing support for apps made by Iranian citizens over the past year. The recent wave of protests has only made the problem more acute.

Sen. Marco Rubio, R-Fla., and Sen. Bob Menendez, D-N.J., penned a letter to Treasury Secretary Steve Mnuchin and Secretary of State Rex Tillerson last week requesting that they “work with US technology firms to ensure that protesters have access to the tools they need to let their voices be heard.”

“Assuring US technology companies that they are not violating US sanctions would go a long way toward ensuring that Iranians are able to freely protest their government,” Rubio and Menendez said.

The advocacy groups wrote a similar letter to Mnuchin and Tillerson in October. However, the coalition went a step further than Rubio and Menendez and beseeched the Trump administration to provide more sanctions exemptions for digital services in Iran.

“Apple and Google appear to have deleted mobile applications ('apps') developed by Iranian users from their respective mobile application stores ('app stores'),” the coalition wrote. “These events are an impediment to the free flow of information and private entrepreneurship independent of the government of Iran. We are concerned that the actions by Apple and Google were mandated by current US sanctions laws and regulations.”

“The disappearance of popular apps created by young Iranian developers and previously made accessible to Iranian users has created shockwaves amongst Iranians online – a potent feeling that they are being unfairly punished for the seemingly perpetual geopolitical dispute between their government and the government of the United States,” the letter added.

Anderson said that while the Treasury Department clearly names certain software such as Adobe Flash that companies can make available in Iran, the Obama-era general license may not allow them to publish Iranian-made apps on their platforms.

“In the case of Iranian-developed applications, the thing to keep in mind is that while there’s pushback from civil society, I think Google and Facebook are most likely correct in their analysis that these are not covered by general licenses,” Anderson told Al-Monitor. “[The general license] allows for the export of service tools to Iranians. It doesn’t allow commercial services and the impact of Iranians hosting applications might actually be an import of services, not an export.”

Neither Apple nor Google responded to Al-Monitor’s inquiries as to why they have blocked Iranian-made apps and restricted certain products. The Treasury Department also declined to comment about whether it is doing anything to ensure that US technology firms are allowing Iranians to access their apps and software.