An American citizen of Turkish origin reportedly turned himself in to Turkish authorities and faces a 15-year jail sentence for his role in founding the ByLock phone app, which state officials claim was used by supporters of a failed coup in 2016. 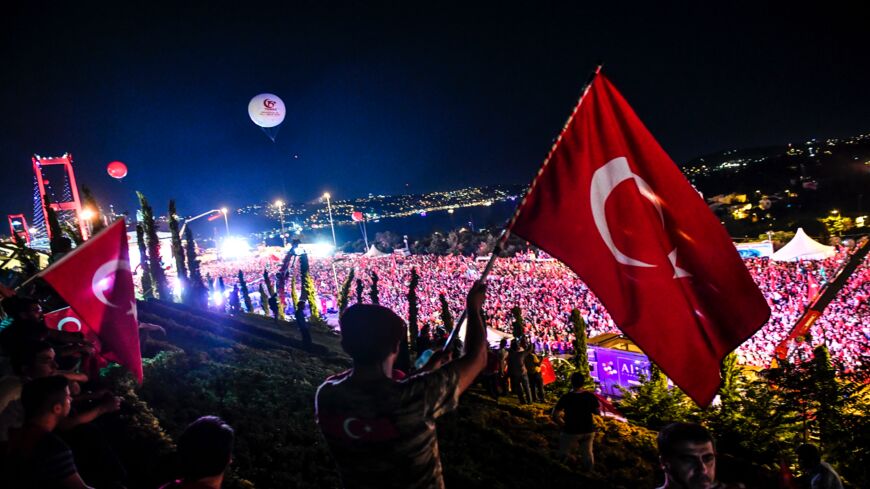 People gather at the July 15 Martyrs Bridge to commemorate the July 15, 2016, coup anniversary in Istanbul, on July 15, 2018. The bloody coup attempt was followed by a series of purges in the public sector and changes to boost President Recep Tayyip Erdogan's powers. - BULENT KILIC/AFP via Getty Images

ISTANBUL — According to state media reports, an American citizen of Turkish origin faces 15 years in prison after he surrendered to Turkish authorities last month over his role in founding a messaging app state officials say was used by supporters of a failed coup in 2016.

David Keynes, the alleged license holder for the ByLock app, reportedly turned himself in to Turkish authorities after arriving at Istanbul’s main airport on June 9, though news of his legal proceedings was initially made public Wednesday.

This comes after the Istanbul Chief Public Prosecutor’s Office on Dec. 17, 2020, issued a detention warrant for Keynes, a Turkish national formerly known as Alpaslan Demir who changed his name upon taking US citizenship in 2011.

Keynes was charged with “membership in an armed terrorist organization.” On March 4, 2021, his lawyer told authorities he would testify under Turkish remorse provisions that grant suspects more lenient sentences in exchange for collaborating with investigators. Legal experts familiar with the matter said information shared by Keynes in his testimony could impact future prosecutions involving suspects facing coup-linked charges.

Turkish authorities claim the ByLock messaging app was used by followers of Fethullah Gulen, an exiled Muslim cleric living in the United States who is accused by Ankara of orchestrating a violent coup attempt in 2016 in which about 250 people lost their lives.

In a crackdown on Gulen supporters that followed the failed putsch, thousands of Turkish citizens alleged to have downloaded the app on their phones were dismissed, suspended or arrested over suspected ties to the Gulen network, which the Turkish government refers to as the Fethullah Gulen Terror Organization (FETO).

Though Turkish courts ruled in September 2017 that ByLock usage was sufficient proof of FETO membership, the European Court of Human Rights ruled earlier this month the presence of ByLock on a suspect’s phone, in absence of additional evidence, offered inadequate grounds to link individuals to a terrorist organization, concluding the app was not exclusively used by Gulen supporters.

Ahead of Keynes’ legal proceedings, Yaman Akdeniz, a law professor at Istanbul Bilgi University and a founder of the Freedom of Expression Association, said his coming testimony could shed further light on the use of the ByLock app as well as its links with the Gulen network.

“There are several applications pending at the European Court level and pressure is now on Turkey,” Akdeniz told Al-Monitor. “Therefore, the arrest of David Keynes and what he will reveal will be important in terms of the role played by the application and its usage.”

The ByLock app was initially launched in 2014 on the Apple and Google Play app stores. Its developers removed it from the platforms the same year, but ByLock remained available for download on lesser-known platforms until it was fully shuttered in early 2016.

In an October 2016 interview, Keynes told Turkey’s Hurriyet newspaper his former roommate, nicknamed “Fox,” had developed the app and used Keynes’ credit card with consent to launch it on the app stores. Keynes said ByLock had been downloaded by 600,000 people, the majority of which were in Turkey, Saudi Arabia and Iran, adding he suspected most Turkish ByLock users were linked to the Gulen network.

Prior to the 2016 coup attempt, Turkey’s intelligence agency was able to crack ByLock’s security features and began identifying thousands of suspected Gulen supporters through the app, including 600 ranking military personnel.

While the crackdown on ByLock users accelerated following the failed putsch, Turkish prosecutors revealed in December 2016 more than 11,000 people had been wrongfully accused of downloading the app after it was found ByLock shared a platform with unrelated phone apps that, if downloaded, could be mistaken as evidence of ByLock usage.

Levent Maziliguney, a former internal auditor with the Turkish Defense Ministry who was dismissed after his brother was alleged to have used ByLock, said he hopes Keynes' revelations about the app will help bring more clarity regarding ByLock’s intended uses.

“If the application was uploaded to the Google Play store and the Apple App Store, no one can say this was an exclusive application” for the Gulen network, Maziliguney, who is now a digital forensics lawyer, told Al-Monitor. “It was open to the public. Anyone could have downloaded and used that application.”

Still, Maziliguney noted Keynes was ByLock’s license holder, not the developer, so he may offer only limited information on the app’s technical aspects. Prosecutors claim Keynes joined the Gulen network as a student and holds deep knowledge of the group, alleging he served as a handler for the group’s infiltrators in the Turkish armed forces.