In recent weeks, Ankara has eased travel restrictions for some citizens prosecuted in Turkey’s post-coup crackdown, yet thousands of dismissed civil servants continue to struggle for their right to work. 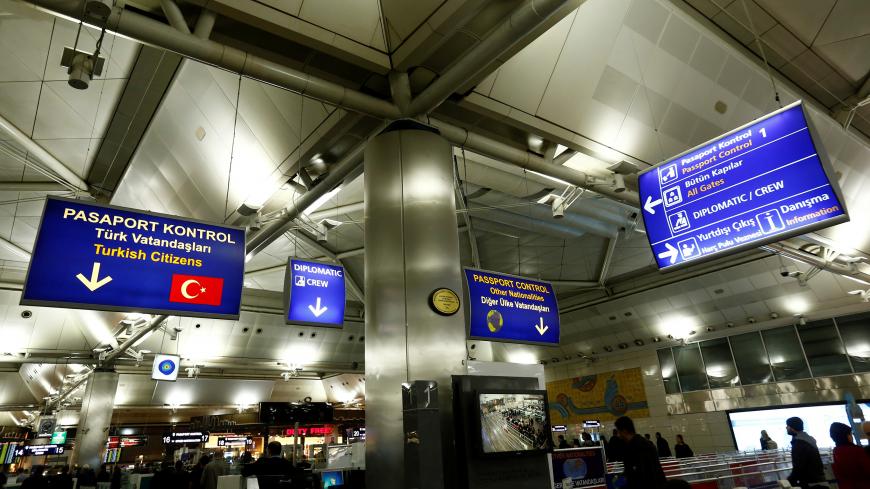 ISTANBUL — Ali Riza Gungen has been fighting to get his job back since he was dismissed in November 2016. Once a professor of economics at 19 Mayis University in Samsun, he was among more than 800 academics prosecuted for signing a peace petition opposing military operations in the nation’s southeast that year.

Gungen and many other signatories were acquitted of terror-related charges in September, but he has been unable to recover his former position. Like most civil servants dismissed after the 2016 coup attempt, he was also restricted from traveling abroad. He has been pursuing legal avenues to get his passport reinstated.

“I applied for the reinstatement [of my job],” Gungen told Al-Monitor. “It’s been almost three and a half years. I went to the inquiry commission on state of emergency measures. I applied to the European Court of Human Rights. I applied everywhere and I am still trying, but I could not stay in Turkey under such conditions.”

In early February, Gungen was issued a valid passport and days later joined his wife in Vancouver, Canada, where she has relocated for work after facing similar difficulties in her academic career in Turkey.

Gungen is among a growing number of civil servants who have seen their right to travel abroad restored in recent weeks. On Feb. 21, Turkey’s General Directorate of Civil Registration and Citizenship lifted travel restrictions on more than 11,000 people, gradually reinstating passports to citizens acquitted or not convicted of charges stemming from a state of emergency imposed after the failed coup.

Yet not all of the 150,000 Turkish citizens dismissed in post-coup purges seek to leave their country. Many want to stay and continue their struggle to regain basic rights, such as the ability to work legally and have access to state pensions, health insurance and banking services.

Levent Maziliguney, a dismissed internal auditor for the Turkish Defense Ministry, is one of them.

“I am not a criminal,” Maziliguney told Al-Monitor. “I will stay in my country and fight for my right to work.”

In April 2017, Maziliguney was dismissed after his brother, a captain in the gendarmerie, was accused of using ByLock, a phone application the Turkish state claims is used by followers of Fethullah Gulen, the US-based cleric accused of organizing the 2016 coup attempt.

Maziliguney took it upon himself to prove his brother did not use ByLock and became a self-taught digital forensics expert, publishing a several reports claiming various phone apps share the same IP address with ByLock, a point he said may have led prosecutors to lodge false accusations.

Maintaining his brother’s innocence, Maziliguney has since pursued a career as lawyer, but has so far been denied the necessary license to practice law in Turkey despite having the approval of the Ankara Bar Association and lawyers union, he says, due to his prior dismissal.

“What the government is telling us is they will decide who is a terrorist and who is not,” Maziliguney told Al-Monitor. “And they will decide if we can pursue our profession or not. They are the only decision-makers.”

The Turkish Interior Ministry did not respond to requests for comment for this report.

Maziliguney said he does not plan to apply to have his passport reinstated in the near future and that he does not have “hope for a positive decision.”

Haluk Savas is another prominent face in the fight to restore rights for dismissed civil servants in Turkey. A practicing psychiatrist and professor dismissed from Gaziantep University, Savas helped found a YouTube-based media initiative called KHK TV, named after the abbreviation for the state of emergency laws that led to many citizens’ dismissals.

Established in August 2019, the platform is run by a group of six activists, including Savas and his wife, and has grown in popularity for sharing stories showcasing the laws' impacts on peoples’ lives as well as news developments and court decisions they claim are unjust.

Savas gained national attention after he was diagnosed with cancer of the pancreas and gall bladder while in pretrial detention, preventing him from traveling abroad to seek treatments he said were unavailable in Turkey. Media coverage of his dilemma eventually led to the reinstatement of his passport.

He then went to Germany for treatment, where he could have remained, yet he returned to Turkey because he did not “want to flee like a criminal.” He also saw the effect media coverage could have on the government, and he now seeks to mobilize his sizeable social media following.

“Social media is the primary avenue for putting pressure on the government,” Savas told Al-Monitor. “Social media is where our movement started, but we don’t want to limit it to that. We are also aware that the real fight is in the political arena.”

Savas said he has reached out to opposition party leaders in Turkey to expand his efforts. Reacting to the recent lifting of travel restrictions for some dismissed civil servants, Savas said domestic and international developments such as in Syria may be forcing members of the ruling Justice and Development Party to soften their stance regarding the thousands of purged citizens that remain without jobs and without criminal charges.

“I think the growing number of campaigns pushing for some kind of resolution for dismissed workers are making these issues hard to ignore for the government,” Savas said. “Also there are new parties being established like the Gelecek Party,” he added, referring to former Prime Minister Ahmet Davutoglu’s Future Party, with which some activists have also been collaborating to secure more favorable conditions for dismissed civil servants.

According to Interior Ministry data, at least 20,000 citizens who had their passports canceled during the state of emergency remain without access to travel documents in Turkey. Many more remain without legal avenues to work in Turkey.

In recent years, various programs have emerged to aid some dismissed civil servants. They include Off-University, an online platform based in Germany that employs professors around the world, recruiting individuals facing political persecution.

Gungen is one of the professors giving online courses on the platform. He earns 1,000 euros ($1,085) a month, which he says helps cover expenses for his new life in Vancouver. Yet between lessons, he continues to pursue the restoration of his working rights in Turkey, even though he has no plans to return anytime soon.

He said he does not expect freedom of expression to be fully restored on Turkish university campuses in the near future. It would be a long process, Gungen continued, noting several colleagues and friends received valid passports in recent months and also left to take up foreign postings.

“I do not like to use the term, but this is a brain drain,” Gungen told Al-Monitor.

He added, “We should not isolate the education system from what’s happening in other fields. If you’re talking about modern ideas of freedom, equality and rule of law, of course there has been a deterioration and of course it will damage the country. It already has damaged the country. But it’s not easy to see the real impact of this damage yet.”