A Turkish court ruling has led to the acquittal of 27 academics convicted and on trial over terror charges, but the shaken defendants are hesitant to believe the decision will stand and be extended to hundreds of their purged colleagues. 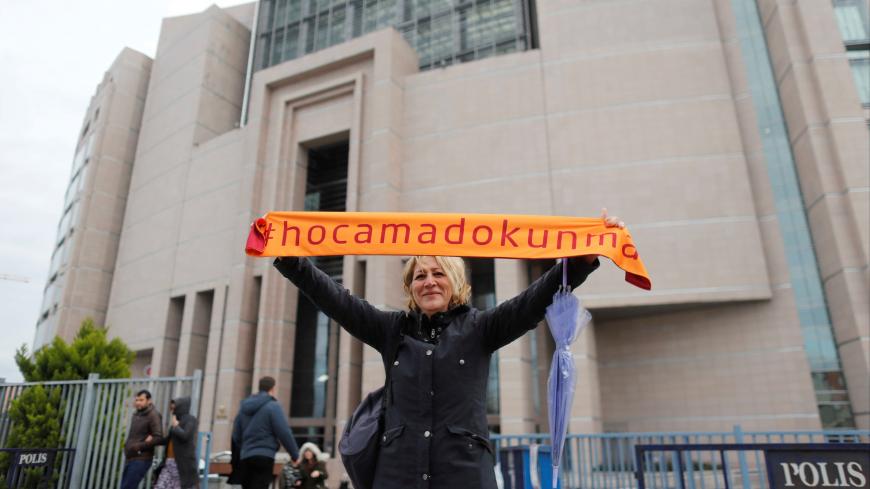 A demonstrator holds scarf reading "Don't touch my academics" in front of the Justice Palace during the first of a series of trials for some 150 academics from public and private universities accused of spreading terrorist propaganda, in Istanbul, Turkey, Dec. 5, 2017. - REUTERS/Osman Orsal

It’s been more than three years since Ali Riza Gungen, an economics professor at 19 Mayis University in Samsun, Turkey, lost his job for signing a petition. He is one of the nearly 800 “Academics for Peace” who have faced charges of making terrorist propaganda for participating in the open letter calling for the end of military operations in southeast Turkey back in January 2016.

Like hundreds of other academics, Gungen was dismissed from his position, banned from working in public institutions and had his passport revoked, barring him from traveling abroad. Following a July ruling by the Constitutional Court, which found that the purged academics' freedom of speech had been violated, Gungen was among 27 defendants acquitted of all charges.

“It was a surprise for me because despite the Constitutional Court decision, I know we don’t live in a system adhering to the rule of law,” Gungen told Al-Monitor, saying he learned of his acquittal on Monday.

More acquittals are expected in the coming weeks as judges and prosecutors review ongoing trials. If the rulings stand, hundreds of academics could see their ongoing trials end, while those who have already been convicted could get their sentences overturned. Still, the Istanbul prosecutor’s office could challenge the acquittals.

“It’s not justice, but a temporary relief,” Gungen told Al-Monitor, saying he would follow developments closely. “They have no evidence against me whatsoever and … it’s a kind of torture, slow-motion torture. I might not be in prison, but I can say I have seen hell over the last three and a half years.”

The academics were accused of spreading terrorist propaganda for signing an open letter published on Jan. 10, 2016, titled, “We will not be a party to this crime!” The letter, which had more than 2,000 signatories including such prominent Western peace activists as Noam Chomsky, denounced an ongoing conflict between the Turkish state and the Kurdistan Workers Party, a Kurdish militant group designated as a terror organization by Turkey and the United States.

Since then, 795 Turkish academics who signed the petition were put on trial in separate cases, 204 have been sentenced and seven have served time in prison. Nearly all of the prosecuted academics were dismissed from their positions and barred from seeking work in their fields as well as traveling abroad. A group of 10 academics appealed their convictions and on July 26, Turkey’s Constitutional Court ruled that the legal proceedings had violated the signatories’ freedom of expression.

The ruling produced its first acquittal Sept. 6. Ozlem Sendeniz, a research associate at Igdir University, had lost her job for signing the petition. Sendeniz said she was surprised by her acquittal and that she had expected to be sentenced to jail when she entered the courtroom for a hearing.

“My acquittal was pure luck,” Sendeniz told Al-Monitor. “This was only possible with the appeal of the 10 academics to the constitutional court. … Everyone who was in this process, they held their ground, they stood strong and made this decision happen.”

Since being fired on Feb. 7, 2017, Sendeniz said she was forced to move back in with her family. Unable to work, she sustained herself through small freelance jobs while receiving nominal financial support from a fund for dismissed academics organized by Turkey’s Education and Science Workers Union.

“It has been a difficult period,” Sendeniz said. “It’s not a normal situation, but after a while I started viewing this whole ordeal as normal.”

If her acquittal stands, Sendeniz said she will join other affected academics in beginning a long process to reclaim her legal working status and passport.

Asli Odman, a coordinator for Academics for Peace, said the group would first seek acquittals in all cases opened against the purged academics. She said the growing number of acquittals this week was a welcome turn of events, but she is awaiting her own hearing on Nov. 12 and is hesitant to get her hopes up.

“On paper, all the courts have to apply the Constitutional Court decision, but also on paper, this case should never have been opened,” Odman told Al-Monitor. “We can never put trust in the application of the principles of the legal system.”

Even if the convictions and cases are overturned in favor of the purged academics, Odman said the impact of the prosecutions could not be erased.

“Some things we will never be able to recover, like our colleague who committed suicide, Mehmet Fatih Tras,” Odman told Al-Monitor. “He tried four times to get a job but couldn’t because he signed the peace petition. He lost all his hope.”

Gungen also expressed doubt over his future prospects as an academic in Turkey. He said he does not expect to get fair compensation for his legal expenses, nor his former job at 19 Mayis University.

“There have been so many dismissals, so many changes to the legal system regulating universities in Turkey,” Gungen told Al-Monitor. “It is really hard for political dissidents to be part of the structure of the university system.”

He added, “You cannot do your job well if you are not allowed to apply for funds available to some academics, but not to you. I do not believe we will be able to work properly, but we will continue our struggle.”